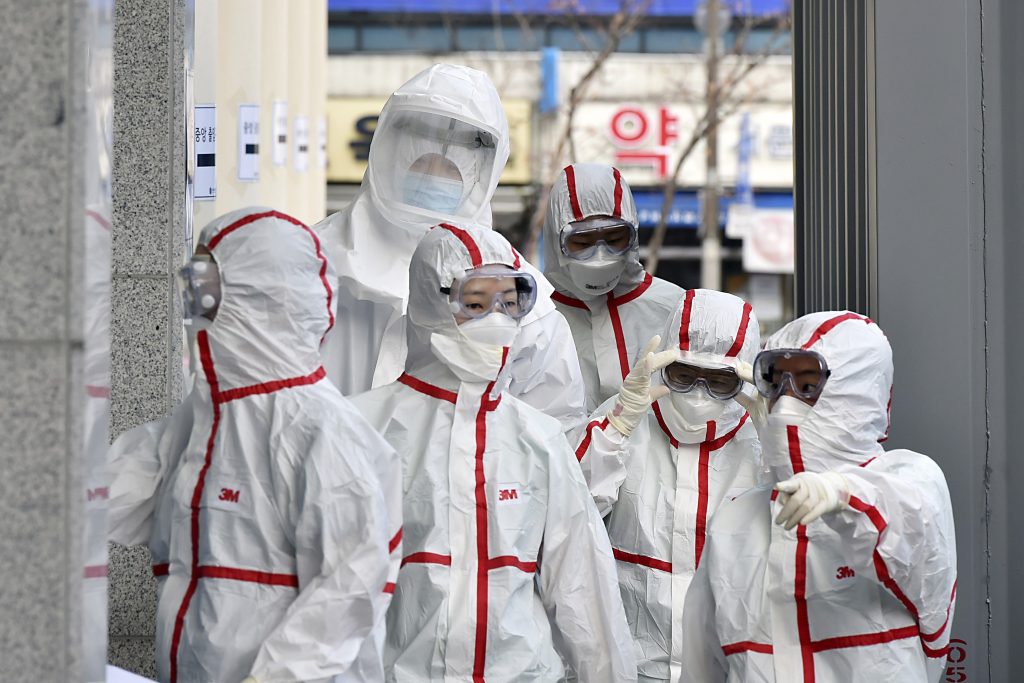 Iranians hoarded medical supplies, Italians urged doctors out of retirement and South Koreans prepared to pump billions into relief efforts Tuesday as the virus epidemic firmed its hold around the globe.

Mushrooming outbreaks in the Mideast, Europe and South Korea contrasted with optimism in China, where thousands of recovered patients were going home. A growing outbreak in the United States led schools and subways to sanitize, a search for a vaccine to be pushed, and fears of vulnerability for nursing home residents spread.

“We have moved to a new stage in the fight,” said Dow Constantine, the political leader in King County, Washington, which is home to Seattle. All six U.S. fatalities from COVID-19 have been in Washington state and Constantine said his county was buying a hotel to become a hospital for isolated patients.

World Health Organization (WHO) leader Tedros Adhanom Ghebreyesus said outbreaks in South Korea, Italy, Iran and Japan were the agency’s greatest concern. He said the virus was uniquely capable of community transmission but could be contained with the right measures.

“We are in uncharted territory,” Tedros said.

In South Korea, coronavirus cases rose further Tuesday, with 477 new infections reported, largely in and around the southeastern city of Daegu, where many cases were clustered around a local church. In all, 4,812 in South Korea have tested positive for the virus.

In the capital of Seoul, drive-through virus testing centers began operating, with workers dressed head-to-toe in white protective suits leaning into cars with mouth swabs, a move meant to limit contact with possible carriers of the illness. Troops were also dispatched across the city to spray streets and alleys with disinfectants.

The country’s death toll rose to 28 and President Moon Jae-in, calling the outbreak “a grave situation,” said his government would push to inject more than 30 trillion won ($25 billion) to fund clinics, aid for small businesses and other measures related to the virus. It requires parliamentary approval.

“The entire country has entered a war against an infectious disease,” he said.

Shares on most Asian indexes rose for a second day, following the Dow Jones Industrial Average surging nearly 1,300 points, or 5%. Finance ministers and central bank leaders from the Group of Seven major industrial countries were to convene by phone Tuesday to discuss their response to the virus outbreak.

China’s ambassador to the United Nations said the country was winning its battle against COVID-19.

“We are not far from the coming of the victory,” said Zhang Jun.

In Iran, WHO experts arrived to help local health workers and deliver supplies. France, Germany and the United Kingdom said they would urgently fly test supplies, protective body suits and gloves to Iran, and offered about 5 million euros ($5.5 million) in support.

Iran’s judiciary chief, Ebrahim Raisi, said some people were stockpiling medical supplies for profit, and urged prosecutors to show “no mercy for hoarders.”

“Hoarding sanitizing items is playing with people’s lives and it is not ignorable,” Raisi said.

In Italy, the count of infected people continued rising to 2,036 and officials said it could take up to two weeks to know whether measures including quarantines in 11 northern towns were working.

The U.S.’s count of COVID-19 cases surpassed 100 in at least 11 states. President Donald Trump and his Cabinet met with pharmaceutical executives Monday to discuss how to speed the search for a vaccine. On Capitol Hill, aides said negotiations were nearing completion on an emergency funding bill to fund a vaccine development and offer disaster loans to businesses hurt by the crisis.

“Caution, preparedness, but not panic,” he said.

In Japan, questions continued to build about how the virus might affect the Olympics.

Chinese athletes have already fanned out of their country, with the table tennis team in Qatar, the women’s basketball team in Croatia and wrestlers in Serbia.

The games are set to open in Tokyo on July 24 and the president of the International Olympic Committee said the organization remained committed to going forward as planned. An Irish bookmaker has been taking bets: 4/6 the opening ceremony will not go ahead in Tokyo or 11/10 that it will.

The games’ CEO, Toshiro Muto, was planning a Wednesday teleconference with IOC’s executive board.