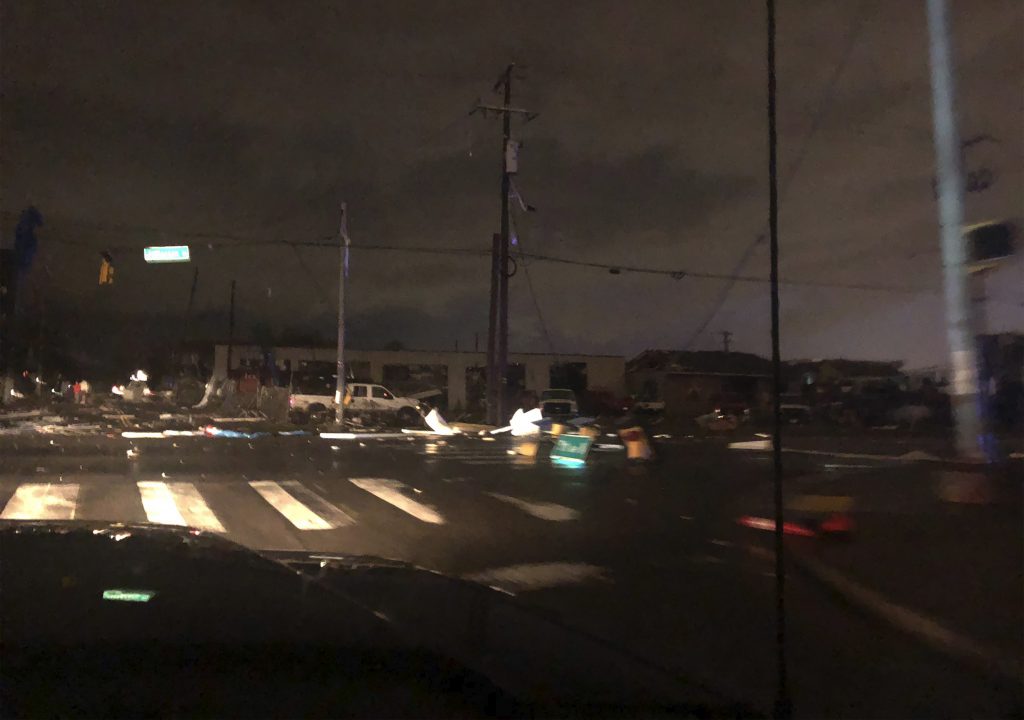 Tornadoes ripped across Tennessee early Tuesday, shredding at least 40 buildings and killing at least seven people. One of the twisters caused severe damage in downtown Nashville.

Authorities urged people to stay indoors, at least until daybreak could reveal the dangers of a landscape littered with blown-down walls and roofs, snapped power lines and huge broken trees. Schools, courts and transit lines were closed, and some damaged polling stations were moved only hours before Super Tuesday voting was set to begin.

“A tornado skipped across the county,” Nashville Mayor John Cooper told the Tennessean while visiting an emergency shelter early Tuesday. “You do have people at the hospital and frankly there have been fatalities.”

A line of severe storms caused damage across Tennessee as it moved through the state after midnight. Buildings, roads, bridges, utilities and businesses were affected, Hannan said.

One tornado near downtown reportedly stayed on the ground into Hermitage, about 10 miles (16 kilometers) east of the city. Other areas reporting extensive damage included Mt. Juliet and the trendy Germantown neighborhood near .

“Our community has been impacted significantly,” the Mt. Juliet Police Department tweeted. Multiple homes were damaged and multiple injuries were reported, the department said. ”We continue to search for injured. Stay home if you can.”

Police officers and fire crews were responding to about 40 building collapses around the city, Metro Nashville police said.

John C. Tune Airport, Nashville International’s sister airport in West Nashville, “sustained significant damage due to severe weather,” spokeswoman Kim Gerlock said in a statement early Tuesday morning. Several hangars have been destroyed and power lines are down, she said, adding that there are no reported injuries.

Gerlock asked that the public avoid the airport until further notice and that the Airport Authority has activated its Emergency Operations Center to coordinate response.

A video posted online from east Nashville showed what appeared to be a well-defined tornado moving quickly across the city. Lightning repeatedly flashed while much of the city was in the dark. The whir of the wind could be heard gusting after the tornado moved out of sight.

Images on social media showed extensive damage to buildings, mangled wires on downed power lines and structures that are now unrecognizable as the tornado had reduced them to rubble. One photo showed a white vinyl fence that had fallen a car. Another showed the roof and walls gone from a building that still had what appeared to be boxes stacked on shelves.

The disaster impacted voting in Tennessee, one of 14 Super Tuesday states. Some polling sites in Nashville were moved, and polls in Davidson and Wilson counties were opening an hour late but still closing at 8 p.m. Eastern, Secretary of State Tre Hargett announced.

A reported gas leak forced an evacuation of the IMT building in the Germantown community, according to local media. Photos showed dozens of people in the street carrying their belongings not long after the tornado moved through the city.

The American Red Cross of Tennessee opened a shelter for displaced residents downtown at the Nashville Farmers Market, just north of the state capitol, but a power outage there forced people to move again to the Centennial Sportsplex, the Tennessean reported.

The outage also extended to the capitol building, forcing the cancellation of legislative meetings.

Nashville Electric tweeted that four of its substations were damaged in the tornado. Power outages as of 4 a.m. were affecting more than 44,000 customers, the utility company said.

Metro Nashville Public Schools said its schools would be closed Tuesday because of the tornado damage. Wilson County, just east of metro Nashville will close schools for the rest of the week. Election polling sites at schools were expected to remain open, as well as district offices, according to tweets from its official account.

The storm system was forecast to bring an isolated tornado, damaging winds and large hail, news outlets reported. Heavy rain was expected to impact Gulf Coast states over the next several days.