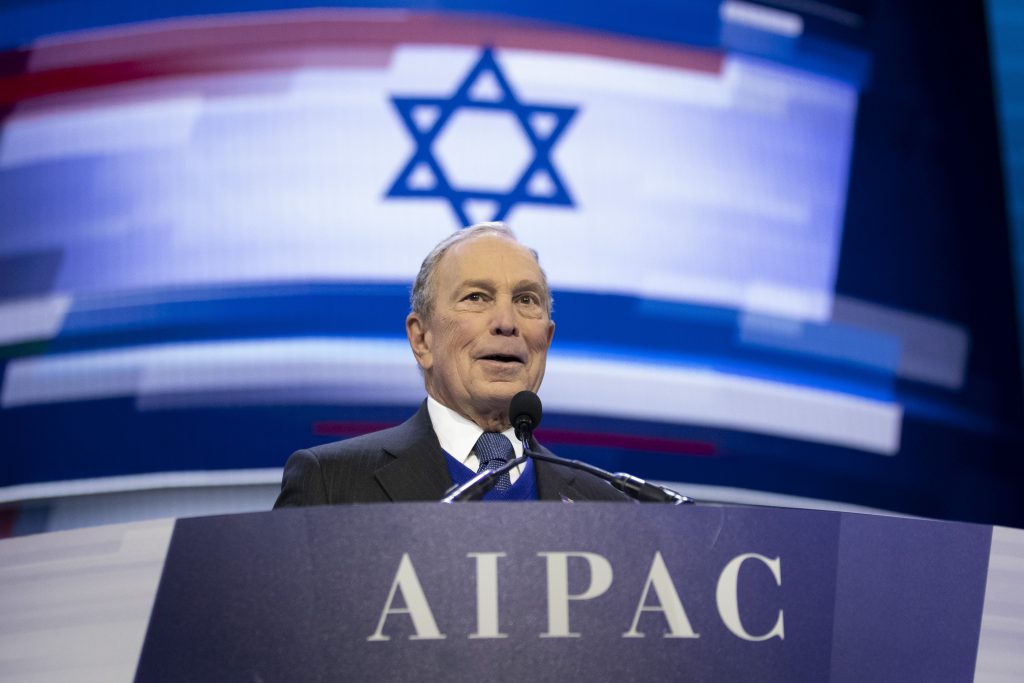 Following Democratic presidential candidate Mike Bloomberg’s speech Monday at the AIPAC conference in Washington, the Bloomberg campaign held a press gaggle with surrogates, including Reps. Ted Deutch (D-Fla.) and Juan Vargas (D-Calif.), and Abigail Pogrebin and Mark Botnick of United for Mike, the Bloomberg campaign’s Jewish outreach initiative. The gaggle was held in a side room of the AIPAC venue, the Walter E. Washington Convention Center, and was open to all topics.

Following are some of the questions and answers from the gaggle, beginning with a Hamodia reporter’s question regarding Bloomberg’s efforts as New York City mayor to regulate metzitzah b’peh and his subsequent comments on the matter that offended many Orthodox Jews.

Questions and answers have been lightly edited for clarity.

Mayor Bloomberg sought to strongly regulate a certain practice in circumcision. Then, in an interview with The Atlantic in 2012, he said, “I think it’s fair to say that nobody else would take that on. I mean, come on! … Who wants to have 10,000 guys in black hats outside your office, screaming?” which the Orthodox community took great offense to. Do you have a response to those comments?

Pogrebin: This is so not what this campaign is about, that it just feels very off-topic to me.

What do you mean ‘off-topic’? It’s of concern to the constituents.

Pogrebin: He just gave a speech on that stage [regarding Israel] that I think was pretty powerful.

Botnick: I was [a Bloomberg aide] at City Hall. Mike has sometimes said things he doesn’t necessarily mean. But if you look at his record in dealing with the Orthodox Jewish community while he was mayor, and the support – and I would encourage you to speak to other members of the community – in terms of public safety, housing, things that were extremely important to the community, Mike was there.

Has he ever explicitly apologized for those comments? Because I am not aware that he has.

His polices as mayor included laws meant to promote health, but which critics call “the nanny state.” Is this something that he intends to do as president also?

Botnick: When Mike was mayor, his focus was on improving the lives of New Yorkers and saving lives. I wouldn’t characterize it as “nanny state.” Everything that Mike has done was done with the aims of lengthening New Yorkers’ [lives].

If you ask him about his proudest accomplishment as mayor, it’s that the life expectancy of New Yorkers was three years longer than when we started. That includes better access to health care, improved public health and safety on the streets. That’s what Mike Bloomberg is about and that’s what he’s going to focus on.

Botnick: Everything he does is driven by data. We looked at data points that improved upon health policy. You can be assured that with Mike Bloomberg as president, he would continue to do things based on data that look to improve the lives of Americans.

Mayor Bloomberg has said that if elected, he would keep the U.S. embassy in Jerusalem. Would he also seek to keep the Trump peace plan in place and negotiate from that, or would he start over with a new plan?

Botnick: He has already said on record that he’s looked at the plan and you have to try, so he supports that, but it has to be direct negotiations between the two parties. Jerusalem will remain the capital of Israel, the embassy will [remain there], but we do have to figure out a way for Israel and the Palestinians to coexist peacefully so both can have prosperous lives.

But he would seek to work from the Trump plan?

Pogrebin: I would not say that he is going to base his plan on a Trump plan.

Botnick: He has said that he supports the framework.

So if he wins, once he comes to office that plan is basically gone?

Pogrebin: I think we’re talking hypotheticals. Mike has always worked from his own plans and his own perspective, so I think we should look forward to that.

Why, in his AIPAC speech, did Bloomberg go after Bernie Sanders for criticizing AIPAC, but he didn’t criticize other Democrats for opposing the attack that killed Qasem Soleimani?

Deutch: He went after Sen. Sanders because he [was speaking] at AIPAC, a place that Sen. Sanders characterized as a forum for bigots. And he spoke about the U.S.-Israel relationship and security assistance to Israel because of Sen. Sanders’ positions.

He’s running against Sen.Sanders in the primary, and he certainly wanted everyone here, and people who care deeply about the U.S.-Israel relationship, to understand the differences between the two of them. He’s not running against members of Congress, and he focused rightly where he should have, which is the person who’s running against him.

Well the other Democratic candidates have touted that Democratic line on Soleimani’s death.

Deutch: He chose to focus, obviously, on the things that the presidential candidates were talking about.

Look, the one thing that’s clear from Mike Bloomberg’s speech today is his firm commitment to the U.S.-Israel relationship, the understanding that it’s necessary to continue to support in a bipartisan way the that long-standing relationship. And he made clear in no uncertain terms exactly where he stands, which is on the side of the overwhelming majority of Americans — Republicans and Democrats — who believe that the U.S.-Israel relationship, and supporting it strongly is in the best interest of both countries.

I think it was also important today in his speech when he talked about the need to bring people together. One of the things that everyone is looking at is not just [where a candidate stands] on every specific issue, although today there are 20,00 pro-Israel activists who are here. The reason that Mike has done rallies and traveled the country is because the top priority for Democrats is to defeat Donald Trump and elect a president who can bring people together and return some normalcy and decency to the Oval Office. There was an appreciation for that here, just as there is in groups that he talks to across the country, and, frankly, across the globe.

Mayor Bloomberg was a Democrat, then a Republican, then an independent, and then a Democrat. What’s to tell voters that he’s anything other than a political opportunist – that he actually has real values?

Deutch: The best thing to do about any candidate running for any office is to look at actually what they’ve done, what their record is. And if you look at Mayor Bloomberg’s record [on Israel as well as] on gun safety, if you look at his record on fighting climate change, if you look at his record on creating economic opportunity for everyone, it’s clear where he stands. And in terms of his commitment to the Democratic Party, look, I serve in the majority in the U.S. House. It is in large part because Mike Bloomberg was so committed to helping to return us to the majority. He understood what was at stake in 2018, when he worked so hard to help deliver a Democratic majority, and he understands what’s at stake in this election – not just to ensure that he’ll be elected the next president, but to ensure that my new colleagues in the majority get reelected; that we build upon the majority and that we win back the Senate so that we can actually capitalize on the shared values that he has with all of us to accomplish things on behalf of the American people.

Besides the issue of Israel, can you discuss the foreign policy positions Bloomberg and Sanders?

I think Bloomberg is the smartest guy out there. If you take a look at his foreign policy with respect to trying to figure out how to lift up all nations, especially our own, in commerce, you won’t find a smarter person. You won’t find anybody better on commerce and on building relationships with other nations.

That’s why I think, at the end of the day, that Mike Bloomberg is going to be our candidate, because he is so intelligent and he has this experience. If you take a look at his company, it’s done so well all over the world because he understands the international system. He knows that the United States has to be strong all over the world so that we can prosper here at home. And so yes, I think that if you take a look at the experiences that he’s had, the successes that he’s had, he’s the right person for the job, especially right now.

In the mayor’s AIPAC speech, he was drawing a very clear distinction between himself and Bernie Sanders in particular, not naming or referring to any other opponents. Is Sanders kind of the big obstacle for Bloomberg right now?

Vargas: I think, Sanders is definitely a big obstacle for Democrats, just to be frank. I think that Bernie Sanders is someone that would lose to Trump. I think Bernie Sanders has a whole lot of us really scared that if he becomes our candidate that we would lose the Congress, we wouldn’t capture the Senate and would lose the presidency. I think that, obviously, Mike Bloomberg would be the best person for president – that’s why I’m supporting him. I think he would be an excellent president. I think he showed today the courage that he has, the intelligence, the leadership. I think that he would be an excellent president. I think he’s got momentum.

What are Bloomberg’s prospects in California? Supposedly, Sanders is going to walk away with it.

I’ve spoken to a lot of California voters who have said they’re getting like 10, 15 Bloomberg mailers, and these are people who don’t tend to support him. Is there a lot like a lot of grassroots support for Bloomberg out there that we’re just not seeing? He’s viewed as being like somewhat distant, like someone who’s just kind of spamming people’s mailboxes.

Vargas: No, I think just the opposite. I think there is a lot of grassroots support for him, and I think a lot of people are very excited about learning about him. We’re California, he was New York; we didn’t know a whole lot about him.

I studied in New York, at Fordham, I studied to be a priest. The president of Fordham, Father McShane was the one that called me and let me know that “you got the greatest candidate in the world who you need to support and get to know more about – Mike Bloomberg.” The people that know him absolutely love him. California’s getting to know him, and we love him.