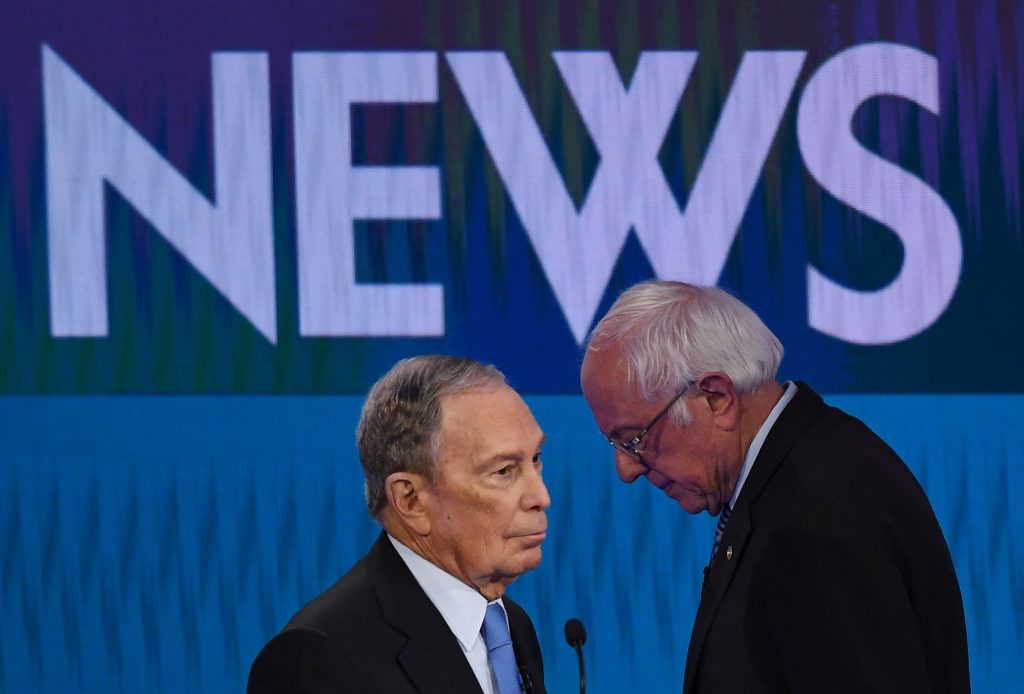 As Bernie Sanders and Michael Bloomberg vie for historical precedence as the first Jewish nominee of a major political party for president, Jewish leaders who might otherwise have celebrated the milestone are expressing concern it could aggravate an unprecedented spike in anti-Semitism nationwide.

The two leading candidates entering Super Tuesday have offered lengthy remarks on Judaism’s influence on their lives and detailed plans to combat discrimination against Jewish Americans.

But Sanders, a self-described democratic socialist senator from Vermont and the frontrunner for the nomination, and Bloomberg, a billionaire philanthropist and former mayor of New York City, represent polar opposite sides of the Democratic Party — on kitchen table issues driving primary voters and on the U.S.-Israel relationship.

Despite their policy differences, Jewish institutions that track anti-Semitism with local and federal law enforcement have identified warning signs that Sanders and Bloomberg are being lumped together by bigots online, becoming the shared target of a steady increase in anti-Semitic attacks and fringe conspiracy theories.

“We’re living in a moment where we know anti-Semitism is on the rise, and yet Jewish Americans are reaching the pinnacle of our politics and demonstrating the diversity inside our community,” said Jonathan Greenblatt, CEO of the Anti-Defamation League. “It’s a bit of a paradox — it’s the best of times and the worst of times.”

Jewish organizations and the FBI have been on a constant state of high alert since the 2016 campaign, when rates of anti-Semitic harassment, vandalism, violent attacks, and other incidents connected with known extremists spiked dramatically. The rate of incidents has remained consistently high ever since.

Deadly assaults on synagogues and a kosher market in Poway, Calif., Pittsburgh and Jersey City, and near-fatal attacks on Jewish institutions in Los Angeles, Columbus and Monsey, N.Y., have crystallized the reality of the threat for those monitoring anti-Semitism.

“The only thing that Bernie Sanders and Mike Bloomberg have in common is that anti-Semites hate them equally,” said Aaron Keyak, a Democratic strategist with Bluelight Strategies who organized independent campaign efforts targeting Florida’s Jewish vote for the last three presidential races.

Keyak anticipated an increase in security not just for the candidates themselves, but for their events and surrogates.

The ADL, which puts out annual audits of reported cases of anti-Semitism nationwide, said its researchers have been in touch with the Sanders and Bloomberg campaigns as they have tracked an increase in threatening hate speech.

Since 2004, an umbrella organization called the Secure Community Network has served as the central address on security matters for Jewish organizations, working directly with local and federal law enforcement, as well as the Department of Homeland Security, to increase threat awareness and preparedness.

That organization has been preparing for an increase in threats entering the 2020 election cycle, regardless of who the nominee is. But its chief executive officer acknowledged that Sanders and Bloomberg are drawing hostile attention as viable Jewish candidates.

“We’re well aware of the language and chatter,” Michael Masters, CEO of the Secure Community Network, said in an interview. “We obviously see certain trends taking place, particularly on social media, that take into account and that are playing off of the religious affiliation of both Senator Sanders and former Mayor Bloomberg,” he said.

“What impact that might have on our threat assessment does remain somewhat to be seen,” Masters continued, “but in all ways, the trend lines are not encouraging with respect to the threats broadly.”

Nonpartisan Jewish organizations such as the ADL have drawn a correlation within the last five years between a spike in anti-Semitic incidents, an increase in white supremacist rhetoric, and the political ascent of President Donald Trump.

The president’s allies are quick to note he has brought Judaism into the White House in unprecedented fashion with his Orthodox daughter and son-in-law, Ivanka Trump and Jared Kushner, serving in high-level roles. They also point to his alliance with Israeli Prime Minister Benjamin Netanyahu, who has called Trump “the greatest friend that Israel has ever had in the White House.”

But President Trump’s critics cite his remarks in the aftermath of a deadly neo-Nazi rally in Charlottesville, Va., in 2017, in which he called the event one of “very fine people on both sides”; his tweet of a Star of David over a pile of money, calling former Secretary of State Hillary Clinton “corrupt” during the 2016 race; and his closing advertisement from the last campaign, portraying a series of unconnected Jewish bankers as “those who control the levers of power in Washington.” They see those as warning signs of an ugly fight against a potential Jewish nominee in 2020.

“Trump used anti-Semitic tropes when he was running against Hillary Clinton — imagine what will happen when they run against a Jewish candidate,” Keyak said.

Sanders’ campaign officials declined requests for comment, but one adviser to the senator said he has personally counseled his staff to prepare themselves to be the subject of anti-Semitism, and to be accused of it.

Bloomberg campaign officials said they are braced for a bruising general election if their unconventional primary plan succeeds. Their candidate only entered the race in the fall and hopes to sweep up delegates in Super Tuesday states with a torrent of high-dollar ads.

Abby Pogrebin, director of Jewish outreach for the Bloomberg campaign, told McClatchy that anti-Semitic attacks are par for the course for Jewish Americans in public life.

“I know we’ve been shaken as a community,” said Pogrebin. “I am not in any way going to minimize what we’ve seen unfold. But this is how Jews have operated throughout history, and we don’t falter. And Mike embodies that.”

If Jewish Americans are proud that one of their own is on the verge of making history, they are not showing it in polls.

Bloomberg’s $450 million advertising campaign had not reached full steam by the time the Pew poll was conducted. But Sanders has always struggled to attract Jewish voters — who largely identify as moderate Democrats — to his more progressive agenda.

In New York, the city with the largest Jewish population in the world, Bloomberg is the running favorite among Jewish voters with an approval rating of 56%, according to a recent Siena College Research Institute poll. Sanders, by contrast, ranks at the bottom of the pack, with a 61% disapproval rating.

A private Democratic poll conducted in the summer of 2016 found that, among Sanders, Biden and Clinton, Sanders had the lowest favorability rating among Jewish voters in Florida, at 60%, and the highest unfavorable rating at 36%.

Bloomberg’s push in Florida is increasingly focused on attracting the support of its Jewish voters, which could help him make an argument for electability statewide in the general election, his campaign officials said.

“It’s a crucial population, and a representative one,” Pogrebin said. “They want a candidate that doesn’t make them chuck their values out the door and also is a stalwart supporter of Israel.”

American Jews have consistently told pollsters they vote on issues of social welfare and justice — not on Israel policy. Those are the issues that keep Bloomberg and Sanders, otherwise far apart on economic and foreign policy matters, united as Democrats. Jewish voters have coalesced behind the Democratic nominee in every general election for the last 35 years.

But even an incremental shift in support among Jews in Florida, who are 4% of the voter population in a state with 29 electoral votes, could influence a close race there.

Republican operatives are hoping that Trump’s policy positions on Israel will break that decades-long trend and draw Jewish voters over from the Democratic side.

A Trump campaign official told McClatchy that, “while anti-Semitism continues to plague the Democratic Party, President Trump is making good on his promise to defend Israel and stand with our allies” — a theme the president has already touched on in calling Democrats an “anti-Israel, anti-Jewish” party, and Jews “disloyal” for voting with them.

Ben Shapiro, a prominent conservative talk show host who is also Jewish, debuted a line of attack against Sanders this week that called him “as Jewish as a [non- kosher] sandwich” and “Jewish like Karl Marx was Jewish,” criticizing the frontrunner over his relationships with advocates of the boycott movement targeting Israel.

Some Democratic groups are concerned with those relationships, as well.

Democratic Majority for Israel, which has run an ad against Sanders in Florida, is warning that some of the senator’s campaign surrogates — including Linda Sarsour, a controversial Palestinian American activist, and Democratic Reps. Rashida Tlaib of Michigan and Ilhan Omar of Minnesota, who have repeatedly faced accusations of anti-Semitism — could haunt him in a general election.

“There’s a lot of evidence that if Jewish voters perceive a Democratic candidate as not pro-Israel, that that could have a serious cost,” said Mark Mellman, founder of Democratic Majority for Israel and a veteran Democratic pollster. “We’ve never seen that happen because we’ve never had that experience with a nominee. It’s a big gamble.”

National attention on Sanders’ Judaism has focused on his fiercely critical approach to Israel and its cozy relationship with the Trump administration.

Sanders has opposed the Boycott, Divestment and Sanctions movement targeting Israel, agreeing with the assessment of his Senate colleagues that the effort has anti-Semitic undertones. He supports the state’s right to exist as a Jewish and democratic state.

But at the 10th presidential debate in South Carolina on Tuesday, Sanders — who worked on an Israeli commune, or kibbutz, in the 1960s, and has described Judaism as foundational to his views on social justice – was asked to address concerns within the American Jewish community over his criticisms of the Israeli government as a “racist” administration.

“I am very proud of being Jewish. I actually lived in Israel for some months,” Sanders said. “But what I happen to believe is that, right now, sadly, tragically, in Israel, through Bibi Netanyahu, you have a reactionary racist who is now running that country.”

The Bloomberg campaign leapt on Sanders’ response, tweeting that his characterization of PM Netanyahu was “offensive, divisive and dangerous” to “America’s most important ally in the Middle East.”

Sanders’ vocal decision to boycott the annual conference of the American Israel Public Affairs Committee — which he has never attended as a senator — drew harsh rebuke from Democrats who view the group as a bulwark of bipartisan support for the Jewish state.

But his disagreements with Bloomberg over how to talk about Israel and its faults reflect a growing division within the Democratic Party, and within its Jewish community, over the future of the U.S.-Israel relationship.

Bloomberg is the only candidate left in the Democratic field who plans to attend the AIPAC conference, attended by nearly 20,000 activists each year. He will give a speech on Monday that will highlight the continued need for bipartisan support for the “miracle of Israel” and for a two-state solution, his campaign officials said.

It will not be his first address to a Jewish audience as a candidate for president.

“I know I’m not the only Jewish candidate running for president,” Bloomberg said in a major speech in Miami in January. “But I am the only one who doesn’t want to turn America into a kibbutz.”