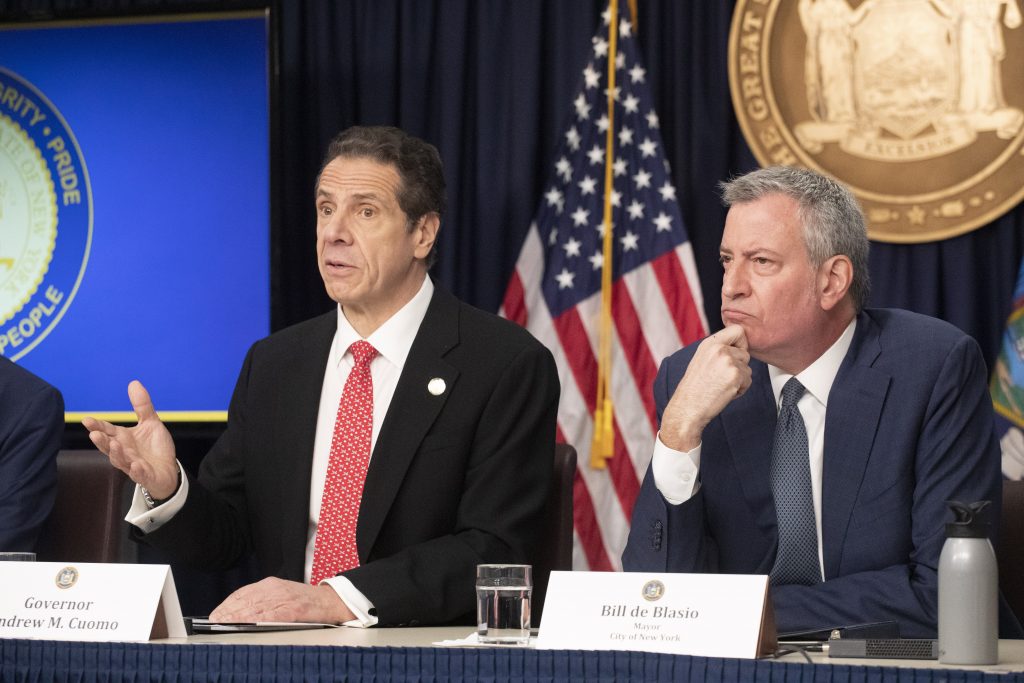 New York leaders sought to calm jittery nerves Monday after the city recorded its first confirmed case of the new coronavirus, saying the disease — while dangerous — is a manageable threat.

The state is increasing its testing capacity and telling people to expect the smell of bleach from cleaning in public areas, including subways, all while underscoring that the diagnosed woman’s symptoms are so mild that she can recover at home, not in a hospital.

“In this situation, the facts defeat fear. Because the reality is reassuring. It is deep-breath time,” Gov. Andrew Cuomo said.

The 39-year-old health care worker who tested positive wasn’t believed to have been contagious when she returned Tuesday from a trip to Iran, a new seat of the outbreak, Cuomo said at a news conference with health officials and New York City Mayor Bill de Blasio.

The woman took a car service from the airport to her home in Manhattan and secluded herself immediately, officials said. Still, officials will contact people who were on her flight and the driver who brought her home, Cuomo said.

The woman began showing symptoms Saturday and arranged to be tested that day, Demetre Daskalakis, a deputy New York City health commissioner, said at a second briefing the mayor led later in the day.

The woman has respiratory symptoms, but they are mild, officials said. Her husband, who is also a health care professional, is also being tested. Results aren’t back yet, but Cuomo said officials are assuming he also has the virus and he has also been isolated at home.

Officials had said for weeks they anticipated the virus would surface eventually in the nation’s biggest city. Still, the development brought questions about the potential for sickness to spread quickly in a city of close quarters — from apartment living to subway riding — and officials sought to tamp down fears.

“We want New Yorkers to go about their everyday lives — use the subway, take the bus, etc.,” city Health Commissioner Dr. Oxiris Barbot said, explaining that COVID-19 “is not an illness that can be easily spread through casual contact.”

The federal Centers for Disease Control and Prevention has said the virus is thought to spread mainly via respiratory droplets among “close contacts” — such as coming directly into contact with the droplets or certain other bodily fluids from a patient, or being within about 6 feet of a patient for “a prolonged period.”

More than 80,000 cases of COVID-19 have occurred worldwide since the virus emerged in China. About 3,000 people have died. The illness is characterized by fever and coughing and, in serious cases, shortness of breath or pneumonia.

De Blasio said he was confident residents would go about their regular lives. “New Yorkers do not scare easily,” he said.

At the same time, he and other officials stressed that people who develop suspicious symptoms should get health care right away, and they urged everyone to take such precautions as hand washing and covering coughs or sneezes. And officials said they expect to see more cases in the city at some point.

New York’s state lab began testing for the virus only over the weekend, but Cuomo said he has set a goal of being able to do 1,000 tests per day within a week. The city’s lab began tests Monday.

“Our challenge now is to test as many people as you can. You are not going to eliminate the spread, but you can limit the spread,” Cuomo said.

With the new cleaning protocols for public transportation and schools, Cuomo said people shouldn’t be alarmed if they smell bleach.

“It’s not bad cologne or perfume; it is bleach,” Cuomo said.