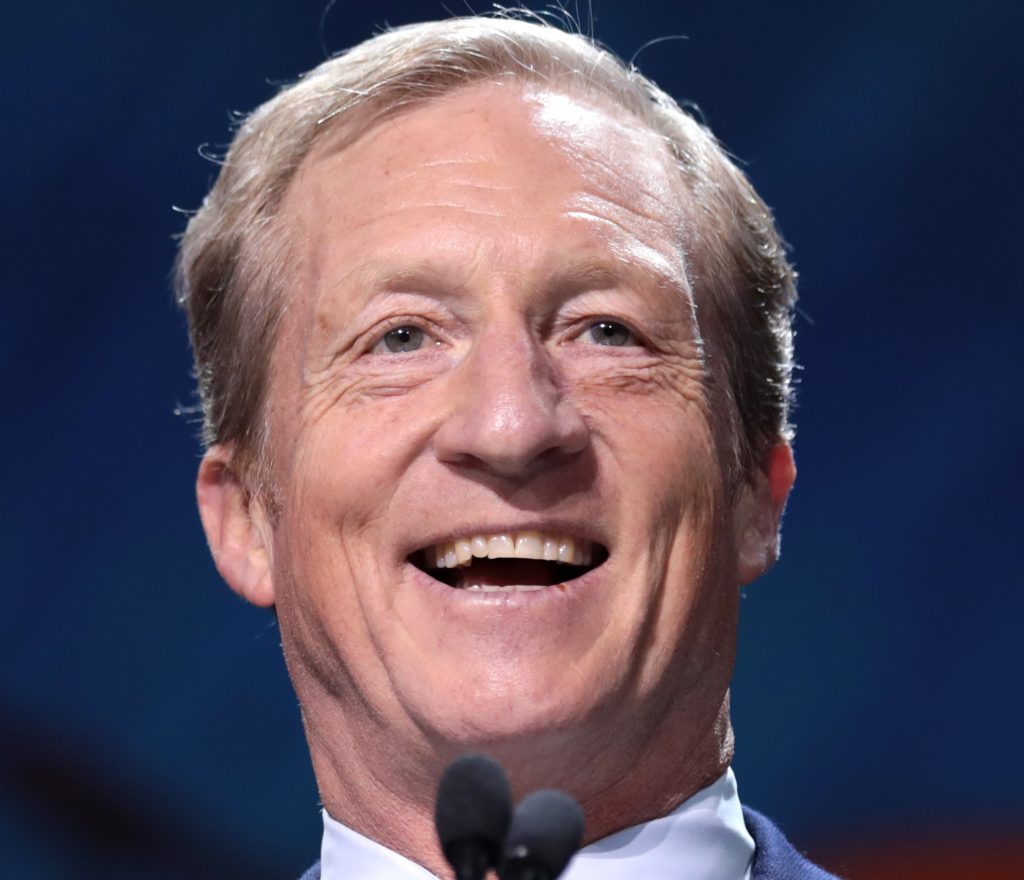 Tom Steyer is ending his presidential bid after a disappointing finish in Saturday’s primary in South Carolina, where he invested heavily in both money and time.

Among the most memorable moments of Steyer’s long-shot campaign was one following a Democratic debate in mid-January, when he came between the two most prominent progressive candidates, Sanders and Elizabeth Warren of Massachusetts, as they were having a heated discussion on stage, watched if not heard by millions.

Steyer, who looked on befuddled, finally stammered, “I don’t want to get in the middle of — I just want to say hi, Bernie.”

Reporters afterward swarmed Steyer to ask what had transpired, but he revealed nothing. “It was one of those awkward moments where I felt like, ‘I need to move on as fast as possible,’” he said on CNN. When the cable network later broadcast audio of the Sanders-Warren confrontation, Steyer capitalized on his awkward moment.

The former hedge fund executive boasted of being a self-made businessman who could take President Trump on as an outsider. Steyer never held public office and was little known when he announced his candidacy in July, after saying months earlier that he would not run. He had gained some recognition among Democratic voters, however, by starring for months in his own television ads as an advocate for impeaching Trump and taking action against climate change.

Steyer largely made his fortune by starting one of the largest U.S. hedge funds, Farallon Capital Management, which invested in fossil fuel projects, and a company that ran migrant detention centers. Steyer told the Los Angeles Times that he left the fund in 2012 partly because of its investments in fossil fuels.

He became a prominent fundraiser for the Democratic Party and founded NextGen America, an advocacy group aimed at registering young voters, and Need to Impeach, an anti-Trump organization.

His progressive platform reflected the activism he embraced after leaving the corporate world, but Steyer struggled to distinguish himself from the other Democrats who expressed similar views, and had been doing it longer.

To address climate change, Steyer set a target of 100% clean energy and net-zero emissions by 2045, called for “justice-centered” policies addressing the vulnerability of communities of color to pollution by fossil fuel companies, and proposed phasing out fossil fuel production.

He supported liberal immigration policies, opposing a border wall and holding that migrants who enter the country illegally should not be charged with a federal crime. Steyer called for independent oversight of the Immigration and Customs Enforcement agency and proposed restricting its forcible deportations and ending work-site raids.

He also called for an assault weapons ban, universal gun licensing and a voluntary buyback program for all firearms, in line with the rest of the Democratic field. Like other candidates, he favored reparations for the descendants of slaves, promising to create a commission to study proposals, and said that as president he would apologize on behalf of the U.S. for the history of slavery.

He kicked off his campaign last summer by committing to spend at least $100 million against rivals who were courting small-dollar donors. Steyer spent $47 million in just the first three months, mostly for advertising. With both Steyer and then former New York Mayor Michael R. Bloomberg in the race, Sanders and Warren in particular sought to score points against them by complaining about billionaires trying to buy the nomination.

Yet the spending initially seemed to pay off. By January, Steyer was rising in the polls in South Carolina, one of the early-voting states, among black voters who make up about 60% of the state’s Democratic electorate.

Steyer struggled to gain traction. He came in fifth in Iowa, New Hampshire and Nevada.