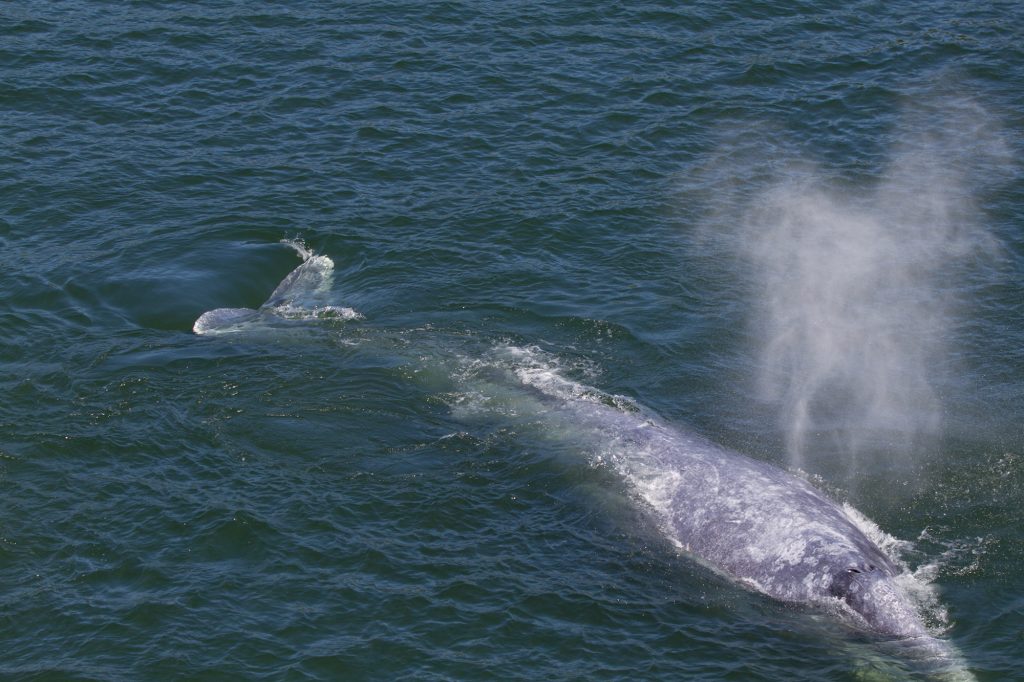 Gray whales are lumbering back into Puget Sound, and scientists have plans in store for some of them.

The mighty grays undertake one of the longest migrations of any mammal, traveling from Arctic feeding grounds to calving areas in Mexico, then back north again come spring.

A small group of about a dozen whales pause along the way, sticking around in northern Puget Sound typically from March through May, though some arrive earlier, and linger longer. These whales, nicknamed “Sounders,” feed on ghost shrimp, snuffling large pits in the mud in the intertidal zone along shore.

The Sounders are beloved locals, such as Little Patch, a male gray whale returning to Puget Sound every year since 1991. Little Patch is back already this year, along with at least three other Sounders recently seen near Whidbey Island. They are a little early this year, and their return this year is of particular interest.

That’s because these whales may have figured out a feeding strategy that helps them survive tough migration conditions. Their ghost shrimp diet while here in Puget Sound is a high-risk maneuver. It brings them close to shore, sucking up shrimp they filter from the mud at high tide.

But their pit stop in Puget Sound on the way north may have saved them from an Unusual Mortality Event that took the lives of more than 200 gray whales last year — about double the usual rate for a migration year — including 34 that stranded in Washington state waters alone, said John Calambokidis, senior researcher at the Cascadia Research Collective in Olympia.

Puget Sound and its near-shore ghost shrimp may be a food refuge for grays in tough migration years. Calambokidis notes that Little Patch and the other Sounders first turned up in Puget Sound during previous die-offs. He and other researchers wonder if these foraging forays are a survival strategy other whales may attempt this year, too.

The work with the Sounders this spring should help scientists understand if the whales overall are in poorer condition. It also should help them learn whether the Sounders have developed a strategy to hedge their bets, and better cope with nutritional stress the rest of the population might be facing.

Other researchers will be studying the Sounders this spring. John Durban, senior scientist with Southall Environmental Associates, an environmental consulting firm, and Holly Fearnbach, of the research nonprofit SR3, will survey the Sounders with a drone, to gather photos and assess their body condition. Calambokidis will do photo identification, and gather samples of their breath and skin.

Even a dog will be involved: Eba, a dog trained to sniff out the whale scat, including fish-eating southern resident orcas and krill-eating baleen whales. Deborah Giles, research scientist for the University of Washington Center for Conservation Biology and research director for nonprofit Wild Orca, will work with Eba to gather gray whale scat that will be analyzed for stress and pregnancy hormones, nutritional status and more.

Because the whales feed in the near shore, from the base of the food chain, even sucking up sediments and mud, their scat also could provide information about toxins in the environment, Giles said. “They are sucking up everything in that near-shore habitat,” she added.

The gray whale population in the northeastern Pacific remains strong, at about 27,000 whales. But the 2019 die-off is important all the same. It could be a sign of a larger disruption in the ocean food web. Or it could signal the effects of the population growing so large, in combination with a change in the prey base, Calambokidis said.

The cause of the die-off is still unknown, and it is too early to say if the grays could be facing another year as tough as 2019, Calambokidis said. But scientists assume the mortality event is still underway.