Gedolei Hador: The Chareidi Public Is in Danger; Go Out and Vote!

With less than 24 hours until the third round of these inconclusive elections in Israel, the campaign teams of the chareidi parties, UTJ and Shas, are working to bring every possible voter to go out and vote.

According to the UTJ campaign team, “people need to understand that the term ‘zechut hakiyum,’ the right to exist, is not just a slogan. The chareidi community is in danger, plain and simple. It’s enough to listen to the rhetoric of the various parties regarding yeshivah budgets, preserving the sanctity of public areas, the institute of marriage, and everything that relates to the life of a chareidi Jew, to realize that the chareidi public is truly facing an existential battle.”

There is a trend among people on the fringe of the chareidi community to vote for any of the right-wing parties, but not a chareidi party. “A secular voter can vote for either the right-wing bloc or the left-wing bloc, and it won’t impact his life in any significant way,” says the campaign team. “Whatever happens, he knows his child’s school will have a building, he will have an apartment; the whole question for him is whether the position of prime minister will be filled by Bibi or by someone else. In essence, that is the question facing the secular voter.

“But for a chareidi voter, the situation is very different. If not for the representation that works on his behalf, his children will learn in caravans. If he is a kollel avreich, his stipend may be cut. Eligibility criteria for various benefits – such as reductions in the payments for day care centers for the children of working mothers – will be manipulated so that, as a chareidi, he loses out. Perhaps he should be grateful for his right to vote. Does this sound frightening? We’ve seen it before. We’ve seen what happens when they don’t need us, and how 70 budget clauses can be erased in a moment, while this entire ‘bloc’ of those who ostensibly seek our welfare doesn’t even try to object. As such, this is a genuine battle for our right to exist.”

Gedolei haTorah have spoken out about the great zechus of every Jew who fulfills his obligation to vote – and the contrary, chalilah. It’s enough to listen to the worry expressed by the Gedolim about the dangers that loom if the chareidi representative power is not maintained, or increased.

Out in the field, the campaigners are working around the clock. Naturally, they say, the fact that this is the third election in such a short period of time means they have become more experienced and have learned lessons from the last time. They are focused, know where to invest more, and what strategies are less effective; what needs to be emphasized more and what less.

On the other hand, the public has some weariness. Understandably, there is a feeling of apathy among many. If the prospects of the upcoming campaigns would vary, even slightly, from the first two, perhaps there’d be some motivation to get involved. But for the third time in one year, we are back to square one. Nothing has changed. It’s the same politicians at each other’s throats, making incessant campaign promises that are either outright lies, total hypocrisy or simply delusional. All the polls show pretty much the same results.

Many frum people are questioning the necessity of investing more time and energy in an election that is bound to end in a deadlock. Why bother?

But there is a compelling reason for action, one that goes beyond self-interest.

Presently, we are confronting an element of risk like never before. Leftists, liberals and self-hating Jews have always lurked in the shadows, their threatening voice looming too close for comfort. But this past year, they’ve upped their game. They are not merely spewing hateful talk. Cities throughout Eretz Yisrael have begun bus service on Shabbos. Let us not be naïve; in the hallowed confines of Eretz Hakodesh, this blatant audacity is a tremendous chillul Hashem. The same can unfortunately be said for the encroaching influence of the Reform movement and their numerous proxies seeking to obliterate all sanctity from the Makom Hamikdash and other Mekomos Hakedoshim. And their battle does not end with the holy sites. They’ve set their sights on the Rabbanut’s halachic authority over geirus and gittin, the fundamental foundations of Jewish continuity.

The campaign run by Avigdor Liberman’s Yisrael Beytenu has taken the chareidi public and tried to delegitimize the public and put them in a very negative light. Liberman, who began with eight seats after the September elections, is now polling in the 6-7 seat range. The Israeli public has seen through his bluff and anti-religious campaign.

The very future of Klal Yisrael is on the wire. Not one day in the future, not soon … but now. Perhaps many of us are ignorant, oblivious or blind to the drastic consequences of these dangerous precedents and are not pained by what we don’t know. But we dare not remain idle or silent to the heartrending thought that in a Jewish State, representing the Am Hashem, there is a vociferous movement to eradicate and erase Toras Hashem, His Will and His Way. The political standoff might not sway us, but the terrible void, the painful chillul Hashem, must surely elicit an outcry. This time, it’s not about politics. This time it’s not about seats in the Knesset. This time, it’s about standing up for Hashem, standing up for kedushas Eretz Yisrael and restoring the glory of kvod Shamayim. 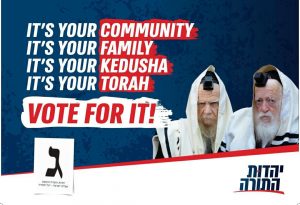