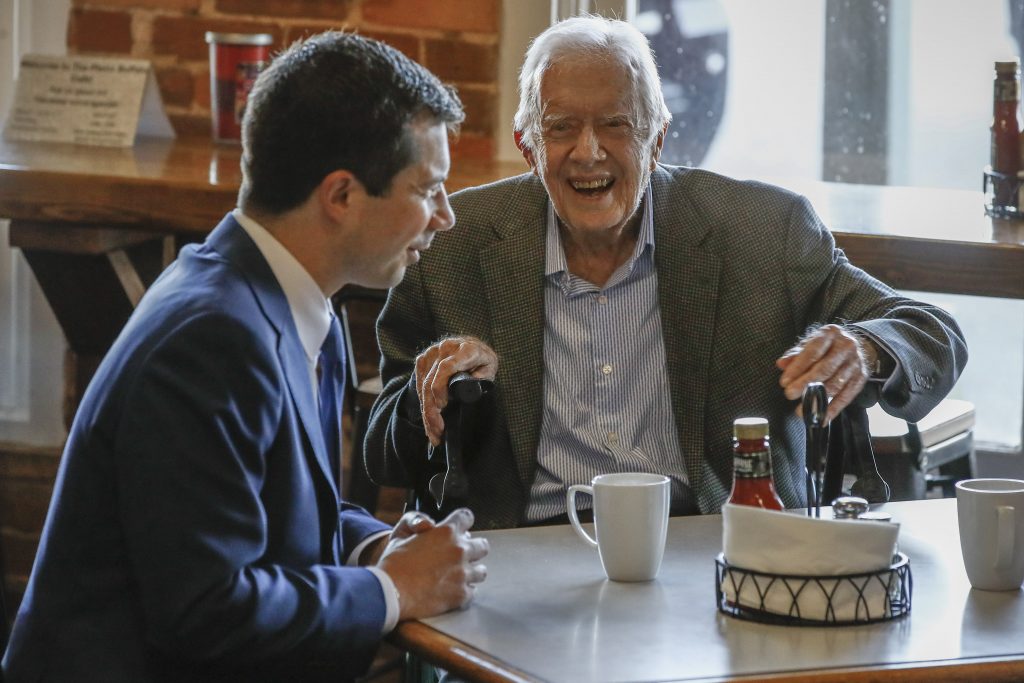 The window is closing for Pete Buttigieg’s longshot presidential campaign.

His fourth-place finish in South Carolina exposed a core vulnerability, namely the inability to attract the support of black voters who are vital to any winning Democratic coalition.

Now he heads into Super Tuesday without momentum and scraping for money against other candidates who have both. Even some Democrats who are among his admirers are saying that it may be time to consider whether it’s wise to go much farther.

“I think he’s going to have to make a decision pretty soon,” said David Axelrod, former senior adviser to President Barack Obama. “Let’s just stipulate he’s the star performer of 2020. If you would have said a year ago, Pete Buttigieg would be among the delegate leaders going into South Carolina, everybody would laugh.

“But his path to actually pulling it off required achieving escape velocity by winning Iowa, winning New Hampshire and propelling himself into Nevada and South Carolina in a way that would earn him a second look from voters who weren’t giving him one,” Alexrod said.

The disastrous vote-counting issues in Iowa diminished the thrust he might have achieved from a once unthinkable win, while an unexpected surge by Minnesota Sen. Amy Klobuchar likely kept him from picking off the New Hampshire primary winner, Vermont Sen. Bernie Sanders.

“So, either before or after Super Tuesday, my sense is he’s going to have to make a decision as to whether there is a way forward and, if not, whether it’s time to call an end to this campaign. I think it’s that simple,” Axelrod said.

In an interview on NBC’s “Meet the Press,” Buttigieg vowed to go at least through Super Tuesday, but was vague on what would happen if he did not fare well.

He was in Georgia on Sunday morning and had breakfast at a cafe in Plains with former President Jimmy Carter.

Aides said Saturday they believe Buttigieg can come out of the primary voting with a plurality of delegates, but only if he is able to hold down Sanders’ margins. For that reason, the campaign is advertising in Sanders’ home state, and elsewhere, in hopes of having running room post-Super Tuesday, when states, such as Michigan, appear more favorable to Buttigieg.

Also, their plan relies on candidates dropping from the race, as billionaire activist Tom Steyer did Saturday after a disappointing third-place finish in South Carolina. Neither Klobuchar nor Massachusetts Sen. Elizabeth Warren has suggested she would follow Steyer’s exit.

“We really believe this is about limiting Sen. Sanders’ lead and making sure that it is possible to close that gap in the remaining states that become more friendly,” Michael Halle, Buttigieg’s senior strategist, told reporters Saturday. However, he stopped short of saying how many of the 1,331 total delegates at stake on Tuesday Buttigieg must win to continue to be viable.

Still, some early and still-loyal fundraisers were grudgingly voicing doubt that Buttigieg could maintain the financial resources and post sufficient gains across the country on Tuesday to long survive into March.

One Buttigieg donor, who spoke on the condition of anonymity because he was not authorized to talk publicly about strategy, said that Super Tuesday was daunting because of its scale, and that it would be exceedingly difficult for him to make a serious comeback.

Others were less dire, pointing to a combination of pride and wistfulness in the story of the 38-year-old, former mid-sized city mayor, who raised $75 million last year and has survived this long to share the debate stage last week with the leading contenders for the Democratic nomination.

Buttigieg’s schedule remains aggressive. He planned events in Dallas on Sunday and Oklahoma City and San Diego on Monday, squeezing Austin and San Diego fundraisers in between, before a rally in a working-class Detroit suburb on Tuesday evening.

The Macomb County, Michigan, event is its own statement of optimism. Michigan, the heart of the industrial Midwest that Buttigieg has long argued he reflects most, holds its primary on March 10.

There was no hint of flagging energy in Raleigh late Saturday, where thousands packed the Broughton High School gym, where Buttigieg was headlining a rally as the results were still coming in from South Carolina.

“We have to come together to write a new story for our future. So let’s make this election about that future,” Buttigieg said, prompting roars from the energized audience.

Despite those heady cheers, Axelrod described Buttigieg as a “hyper-analytical guy” who “among all the candidates is psychologically, emotionally well-suited to make a rational decision.

“And I think that he is very sober and calm and will make a sober and calm analysis,” Axelrod said. “The only thing that might tug on him is the supporters he has around the country, who are going to be less eager to give it up.”