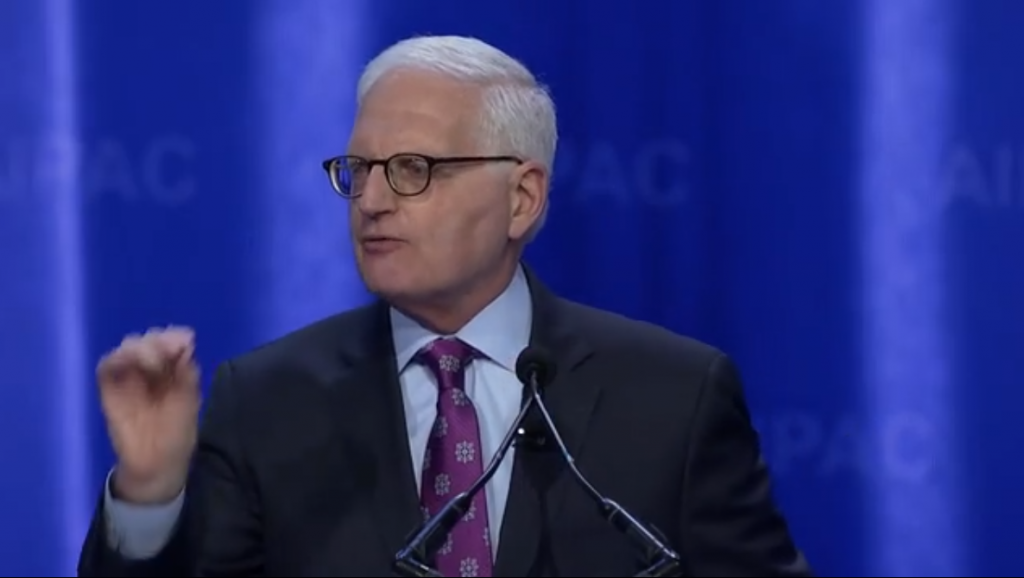 As the 2020 AIPAC conference got underway Sunday morning in Washington, it was clear that – for a movement that prides itself on being bi-partisan – politics, particularly a concern about American political trends, was on the forefront of attendees’ minds.

“Today, I must sound an alarm,” said AIPAC (American Israel Public Affairs Committee) CEO Howard Kohr in his opening remarks. “There is an emerging threat to America’s friendship with Israel. The work we have done and continue to do is at risk. For decades, we have built a broad and bipartisan consensus as the foundation of support for Israel in America … But today that foundation is in danger of being rocked as it never has been before.”

Though Kohr did not mention any political party or name, he was referring to the left-wing of the Democratic Party, whose most prominent leaders, Sens. Bernie Sanders and Elizabeth Warren, are seen as hostile toward Israel and are the only prominent Democratic candidates who will not address this year’s AIPAC conference.

“A growing, highly vocal, and energized part of the electorate fundamentally rejects the value of the U.S.-Israel alliance,” said Kohr. “It is no longer on the margins – but instead has taken the spotlight of our political life. Its most radical views are bending the political conversation and commanding attention.”

Kohr also reiterated AIPAC’s support for a two-state solution, in which “Israel’s security needs are met and Israel has partners who are willing to permanently abandon incitement, terror and war.”

To demonstrate AIPAC’s longstanding desire for U.S. support for Israel to be non-partisan and non-political, Sunday morning’s session began with two AIPAC officials onstage, one a Democrat and the other a Republican, emphasizing that AIPAC is a “bipartisan, highly diverse organization” and asked that speakers “avoid the nasty partisan attacks that unfortunately dominate the current political dialogue in our country,” and that attendees not applaud personal attacks.

Democratic presidential candidate Sen. Amy Klobuchar, who addressed the 18,000 attendees via a pre-recorded video message, recalled that when she ran for Senate, “one of my very first trips abroad was to Israel. I was overwhelmed by the warmth and spirit of the people who welcomed me … During the trip, I saw the resilience of the Israeli people, and it reinforced my commitment to strengthening and relationship between our two countries. It allowed me to see firsthand of critical American support for Israel really is. I will never stop fighting for a strong U.S.-Israel relationship.”

Klobuchar said she is “committed to a peace process that can lead to a two-state solution that allows Israeli sand Palestinians to live side by side in peace and security.”

Klobuchar’s message included a dig at President Donald Trump, as she said, “At a time when President Trump has been focused more on politics than peace, we must ensure that bipartisan support for Israel in Congress does not waver.”

“And if I was given the honor to lead this nation, keeping that support strong and bipartisan would be a major priority.”

Klobuchar is far from the only presidential candidate who has used the AIPAC platform to jab a political opponent.

In 2016, then-candidate Trump used the AIPAC stage to slam President Barack Obama, earning loud applause. The next morning, AIPAC President Lillian Pinkus read a statement denouncing the incident without naming Trump, stating, “We say, unequivocally, that we do not countenance ad hominem attacks, and we take great offense to those that are levied against the president of the United States of America from our stage. While we may have policy differences, we deeply respect the office of the president of the United States and our president, Barack Obama.” Pinkus also criticized those who cheered Trump’s remarks.

Trump has not spoken at an AIPAC conference since taking office, but multiple high-ranking officials from his administration have in the past, and will do so again this year, as Vice President Mike Pence will speak Monday morning and Secretary of State Mike Pompeo will speak Monday night.

In addition to Klobuchar, Democratic presidential candidates Joe Biden and Peter Buttigeg will address the conference via pre-recorded video message; only Mike Bloomberg will speak in person, on Monday morning. The conference comes at a heavy campaigning time preceding and during Super Tuesday primary day.

In announcing he would not address AIPAC, Sanders tweeted, “The Israeli people have the right to live in peace and security. So do the Palestinian people. I remain concerned about the platform AIPAC provides for leaders who express bigotry and oppose basic Palestinian rights. For that reason I will not attend their conference. As president, I will support the rights of both Israelis and Palestinians and do everything possible to bring peace and security to the region.”

Israeli’s U.N. Ambassador Danny Danon responded to Sanders at a breakfast at AIPAC Sunday morning, stating, “We don’t want Sanders at AIPAC. We don’t want him in Israel. Anyone who calls our prime minister a “racist” is either a liar, an ignorant fool, or both.”

Israeli media cited an unnamed Netanyahu aide as saying that Danon’s comments were not coordinated with the prime minister.

Netanyahu will address the conference via live satellite Sunday evening; his opponent, Benny Gantz of the Blue and White Party, spoke Sunday morning.

In remarks that largely sounded like a political stump speech, Gantz said “I entered politics because I feared for our internal unity, our nation.”

“I will fight to keep Israel a country we can be proud of,” declared Gantz. “I will ensure that Israel will remain secure, Jewish and democratic. I will form a government only with partners who share my vision and keep extremists outside of our Knesset. I will protect the rights of all communities around Israel. I will promote welfare equality and resilience across the entire country. I will unite and not divide. I will include and not incite.”

“Every single Jew in the world should be able to feel at home in Israel,” continued Gantz. “Israel is the nation state of all Jewish people. When I’ll be prime minister, everyone will have a place in the Western Wall. Everyone … The Western Wall is long enough for everyone.”

Gantz praised Trump, who recently released a plan for peace in the Middle East, as a “true ally of Israel,” and said that “there has never been a better time for peace than now.”

“It is indeed a historic opportunity to bring hope and security to our region. From Day One of my government, Israel’s hand will be extended in friendship to everyone who seeks peace.”

Attendees who spoke with Hamodia expressed alarm at what they see as a wing of a major American political party opposing Israel.

“I think it’s very sad that some of the Democrats are attacking Israel for defending itself in a part of the world that’s under attack all the time,” said Bryan Bier, a Republican from West Orange, New Jersey. “Those who are attacking it publicly you should try living there. Let’s see what it’s like. They claim they claim that they did years ago but they use it as a weapon,” a reference to Sanders, who frequently mentions that he lived on an Israeli kibbutz in the 1960’s. “He should live there [now]. Live in places like Sderot, live in communities that are constantly under attack, and see what it’s like.”

Lynn Zines, an independent from New York, recalled that when she worked as a staffer for former Rep. Gary Ackerman (D-N.Y.), “Israel really was an issue that was largely bipartisan,” noting, in fact, that the Republican administration of President George H.W. Bush was not seen as particularly friendly to Israel. But now, she says, “it’s become highly politicized, like everything else in this country, and it concerns me greatly … that there’s a radical wing of the Democratic Party that’s having an outsized influence. I’m hoping that it’s really more blown up by the press than it is reality, but time will tell.”

Caren Perlmuter from Skokie, Illinois, said she is “very nervous” that Sanders, whose surrogates include Palestinan activist Linda Sarsour and Rep. Ilhan Omar, who tweeted last year that American support for Israel is “all about the Benjamins” – is now leading Democratic polls.

“So many members of his team have clearly in the past been problematic in their outlooks and in issues with anti semitism, and he is the front runner now for the Democrats,” said Perlmuter. “That’s scary.”