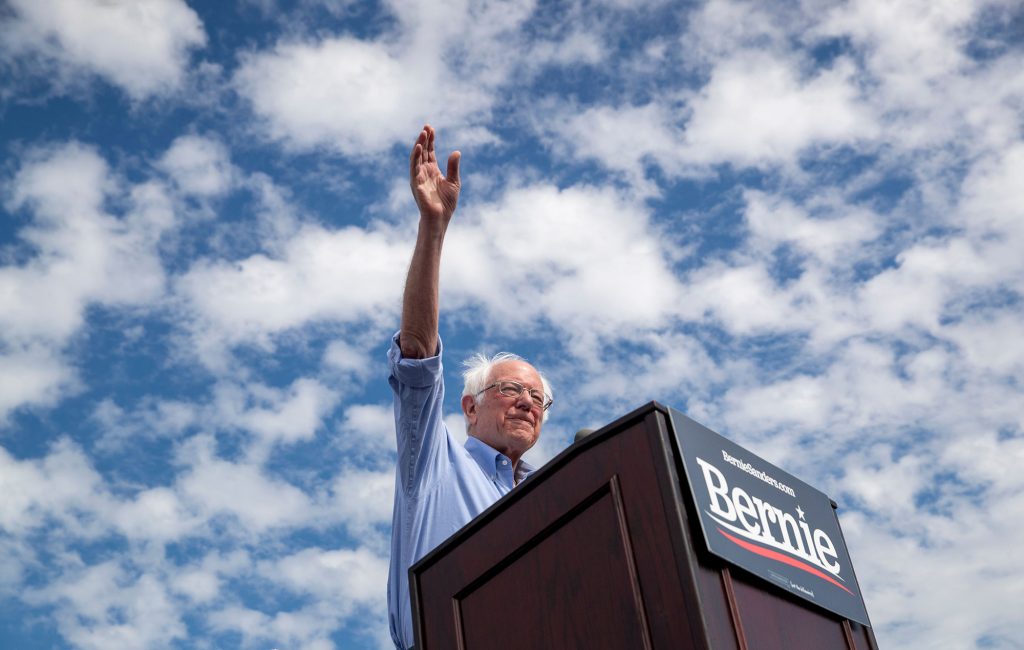 Bernie Sanders is looking to deliver a knock-out blow to his progressive competitor Elizabeth Warren on Super Tuesday by winning the primary on her home turf of Massachusetts.

Sanders, I-Vt., and the national front-runner, is making an aggressive push in the Bay State in the last few days before the March 3 Democratic ballot. He held a rally there Friday night and will hold another on Saturday as polls show him overtaking Warren.

For her part, Sen. Warren will return home on Tuesday to vote but has no planned campaign events in the state, and that night she’ll be in Michigan.

Sanders and Warren are rivals for the progressive mantle in the Democratic race but have largely avoided attacking each other during the campaign, and have declared themselves “friends.” They’ve clashed recently as Sanders has taken the lead in polls while Warren’s efforts have faltered.

During the candidates debate in South Carolina on Tuesday, Warren declared that she “would make a better president than Bernie,” citing examples of her record.

Massachusetts is far from the biggest prize among the 14 states that vote on March 3, with 114 delegates at stake compared with 494 for California. But for Warren, who hasn’t come close to winning a primary, rejection by the voters who know her best could intensify pressure to drop out.

“If she loses Massachusetts, I don’t know how she continues on,” said Scott Ferson, a Democratic strategist based in the state who isn’t backing a candidate. “It’s really hard to make a case that you can win any place else if you can’t in your home state.”

Warren has high favorability among Democratic voters in the state she’s represented in the Senate since 2012. She won election to a second six-year term in 2018 by a wide margin. But her poor performances in the first three nominating contests have led voters to question whether she’d be the best Democrat to defeat Donald Trump in November.

“Warren is popular in Massachusetts and people have a high opinion of her, but I think people view this differently,” Ferson said. “Usually who’s got the best chance of winning (the general election) isn’t part of people’s calculus for voting. I think it is this year, particularly in Massachusetts.”

Warren has played down her need to win Massachusetts, including on Saturday in Columbia, South Carolina, and when pressed at the debate of presidential candidates in South Carolina on Tuesday.

“Look, I’m out here making my case to everybody all across the nation and I’m so deeply grateful to the people in my home state who helped me beat an incumbent Republican back in 2012,” Warren said, referring to her victory over Scott Brown.

The Warren campaign said it’s confident of a strong finish in the state, pointing an army of about 4,500 volunteers on the ground and the 130 organizing events it has held in the weeks before Super Tuesday.

In a recent poll conducted by the University of Massachusetts, 32% of voters said they think Sanders is most likely nominee, far out-pacing Warren, who only had 6% believing she would win the nod. Warren still has slightly higher favorability numbers than Sanders, and the same poll showed that about 40% of voters said they could still be persuaded to change their mind.

Sanders, who’s represented neighboring Vermont in Congress for more than 25 years, is a familiar figure to Massachusetts voters, who tend to be liberal and socially progressive. In the 2016 primary he narrowly lost the state to Hillary Clinton, 50.1% to 48.7%.

“Massachusetts is a very progressive state and progressive ideas are very popular,” Warren told reporters in Columbia, S.C., on Saturday. “And so I’m sure that’s why Bernie is campaigning there.”

Sanders drew thousands to a rally at the MassMutual Center in Springfield on Friday night. He didn’t stray from his usual stump speech or directly address Warren, but State Representative Lindsay Sabadosa, who introduced Sanders, used some of Warren’s signature language.

“I’m ready for a new president who believes in big, bold structural change and who has the courage, the passion, and the plans to make it happen,” Sabadosa said, evoking Warren’s campaign slogan of “big structural change” and her penchant for detailed policy plans.

Sanders kicks on to Boston Common for another rally on Saturday. His campaign is also hosting a multi-day music and organizing festival, called Berniepalooza, in Worcester, the state’s second biggest city, beginning Friday and running through Super Tuesday.

Sanders has crushed Warren in TV advertising in the state, spending $547,632, according to data from Advertising Analytics, which tracks political ads. Warren has only spent $16,000, none of which was booked in the weeks before Super Tuesday.

The spending of either progressive pales in comparison to that of Michael Bloomberg, who entered the Democratic race with a focus on Super Tuesday states.

Bloomberg, who grew up in Medford, north of Boston, has spent $10.8 million on advertising for all markets reaching the state. That includes $9.3 million on broadcast ads, $659,000 on cable and $820,000 on radio, data show. Bloomberg’s campaign said it has more than 60 staffers on the ground and six field offices across the state.

Warren has also deployed resources for her ground game in the state, and local officials say she has one of the strongest operations. But robust field programs have yet to propel her to a top finish in any of the early states.

Still, Warren, whose campaign headquarters are in Charlestown, an historic Boston neighborhood, has the backing of prominent state leaders, including Sen. Ed Markey and Reps. Ayanna Pressley and Joe Kennedy III. She was also recently endorsed by The Boston Globe.

“I think she’s going to do great,” Kennedy told reporters in Cambridge on Feb. 24. “This is Senator Warren’s home turf.”

Massachusetts Rep.Richard Neal endorsed Warren on Friday. “Her record of fighting and winning real results makes her the real deal and the right choice,” Neal said in a statement provided by Warren’s campaign.