Polls: Likud Moves Ahead of Blue and White, Right Bloc Closes on 61 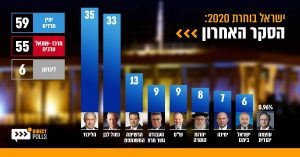 Blue and White leader Benny Gantz’s lead over Israeli Prime Minister Binyamin Netanyahu‏‏ in the polls has evaporated in recent days, as his public image has taken one hit after another.

After Gantz maintained a modest lead for months, the position have reversed, and at least according to one poll released on Thursday night, Netanyahu’s Likud-led right-wing bloc was slowly approaching the 61 mandates needed to form a government.

According to Direct Polls, the right had 59 mandates and Likud would beat Blue and White 35 seats to 33 if elections were hold now.

Netanyahu greeted the news with a tweet: “Two more mandates and we remove Israel from the political quagmire.”

The picture was not quite as bright in two other polls, though. A Kantar poll conducted for KAN News gave Netanyahu’s bloc 58 mandates, with Likud ahead just 35 to 34.

A Panels Research’s poll for The Jerusalem Post found the two main parties tied at 34 each, and the right-wing bloc with 57 seats.

The latter poll predicted 13 seats for Joint List, 9 each for Shas and Labor-Gesher-Meretz, 7 each for Yamina, United Torah Judaism and Yisrael Beytenu.

Gantz was confronted with a criminal probe of his former company “Fifth Dimension” this week, though the former IDF chief was not named as a suspect in corrupt contracting with Israel police for a computer system. In a series of interviews, he has spoken hesitantly and made errors, which he has admitted, and Likud has seized upon the weak performance as indicative of a candidate not ready for national office.

Then, on Thursday night (after the latest polls were conducted), Channel 12 ran a recording in which a top political adviser to Blue and White can be heard derogating Gantz’s ability.

Blue and White dismissed the recording as “lies” engineered by the Likud.