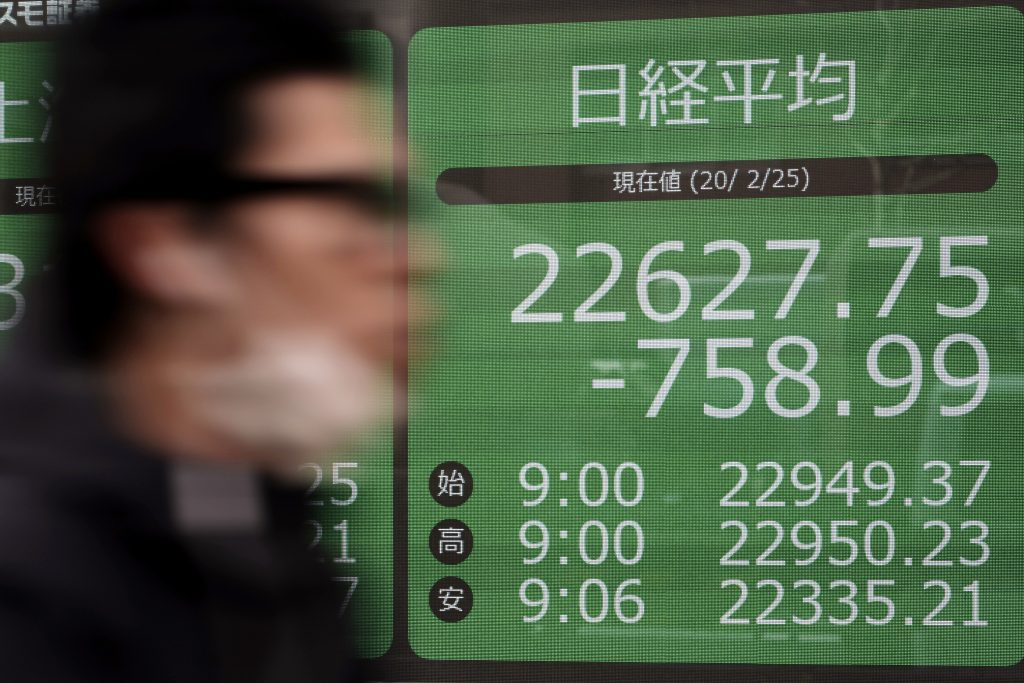 Shares opened lower in Europe on Tuesday after a mixed session in Asia, where Tokyo’s Nikkei 225 index skidded more than 3% as Prime Minister Shinzo Abe urged fresh efforts to contain the outbreak of a new virus that has spread from China to nearly three dozen countries.

Nerves appeared to have steadied after sell-offs Monday that gave Wall Street its worst day in two years, with the Dow Jones Industrial Average tumbling more than 1,000 points.

But a growing number of companies are forecasting their profits will suffer from disruptions caused by efforts to contain the virus, which has infected more than 80,000 people worldwide and killed nearly 2,700, most of them in China.

News of clusters of new cases of the new coronavirus are rattling markets as they emerge, unleashing waves of volatility.

“What is becoming clearer by the hour is the disruption from coronavirus to business globally, in the form of supply chain bottlenecks and falling sales. Against that backdrop, any short-term rallies in asset markets, are likely to be just that, short,” Jeffrey Halley of Oanda said in a report.

China’s economy has been hit hardest by the viral outbreak, as businesses and factories sit idle and people remain homebound because the government has severely restricted travel and imposed strict quarantine measures to stop the virus from spreading.

Economists have cut growth estimates for the Chinese economy and beyond, given the ripple effects being felt all around the world, as China is both a major importer of goods and a source of parts for intricate supply chains.

The Chinese government has promised tax cuts and other aid, but economists say it is likely to be at least mid-March before automakers and other companies return to full production.

“On the trading front, it was a very predictable day as flat-out bearish and oversold markets came up for air and booked some profits,” Stephen Innes of AxiCorp. said in a commentary. “As we enter the new phase of the virus threat, traders are trying to figure out what level of risk alert the market should be on.”

South Korea’s Kospi rebounded from a steep loss on Monday, adding 1.2% to 2,103.61. Shares also rose in Singapore, Taiwan and Bangkok.