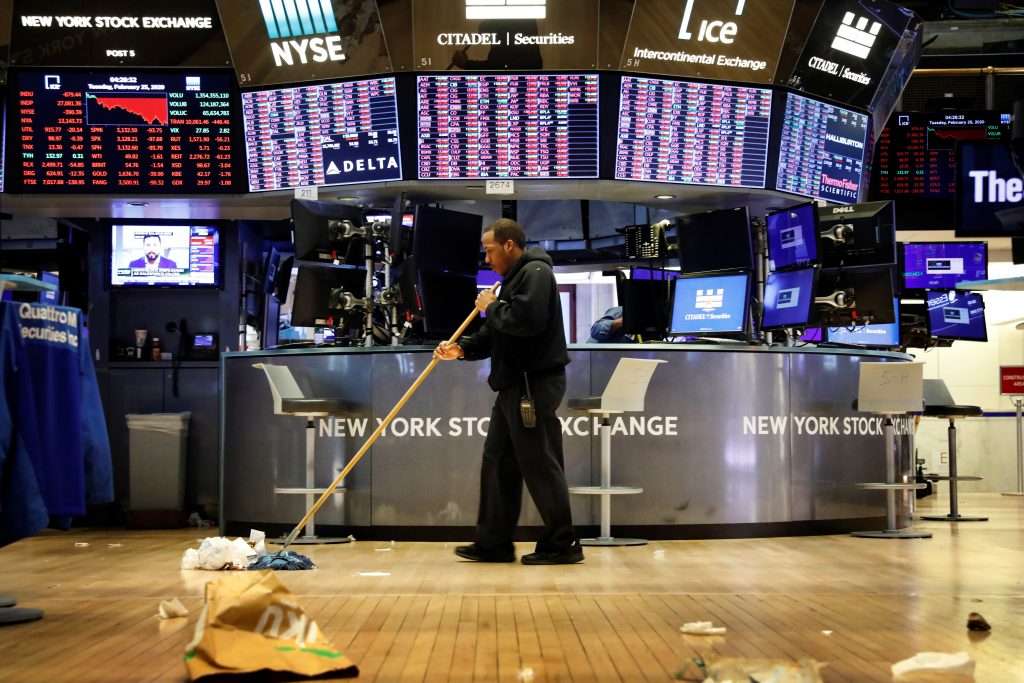 Stocks slumped again on Wall Street Tuesday, piling on losses a day after the market’s biggest drop in two years as fears spread that the growing virus outbreak will put the brakes on the global economy.

Nervous investors snapped up low-risk U.S. government bonds, sending the yield on the 10-year Treasury note to a record low.

The benchmark S&P 500 has lost 7.6% over the last four days, it’s worst such stretch since the end of 2018. Tuesday also marked the first back-to-back 3% losses for the index since the summer of 2015.

The latest wave of selling came as more companies, including United Airlines and Mastercard, warned that the outbreak will hurt their finances, and more cases were reported in Europe and the Middle East, far outside the epicenter in China. Meanwhile, U.S. health officials called on Americans to be prepared for the disease to spread in the United States, where there are currently just a few dozen cases.

The worst-case scenario for investors — where the virus spreads around the world and cripples supply chains and the global economy — hasn’t changed in the last few weeks. But the probability of it happening has risen, said Yung-Yu Ma, chief investment strategist at BMO Wealth Management.

“It’s the combination of South Korea, Japan, Italy and even Iran” reporting virus cases, Ma said. “That really woke up the market, that these four places in different places around the globe can go from low concern to high concern in a matter of days and that we could potentially wake up a week from now and it could be five to 10 additional places.”

Technology stocks, which rely heavily on China for both sales and supply chains, once again led the decline. Apple dropped 3.4% and chipmaker Nvidia slid 4.1%.

Bond prices continued rising. The yield on the 10-year Treasury fell as low as 1.31%, a record, according to TradeWeb, before recovering somewhat to 1.32% in the afternoon. The yield is down from 1.37% late Monday and far below the 1.90% it stood at in early 2020.

The lower bond yields, which force interest rates lower on mortgages and other loans, weighed on banks. JPMorgan Chase slid 4.5% and Bank of America fell 5%.

Real estate companies and utilities also declined, though they held up better than the rest of the market as investors favored safe-play stocks.

The viral outbreak that originated in China has now infected more than 80,000 people globally, with more cases being reported in Europe and the Middle East. The majority of cases and deaths remain centered in China, but the rapid spread to other parts of the world has spooked markets and raised fears that it will hurt the global economy.

United Airlines tumbled 6.5% after withdrawing its financial forecasts for the year because of the impact on demand for air travel. Mastercard dropped 6.7% after saying the impact on cross-border travel and business could cut into its revenue, depending on the duration and severity of the virus outbreak.

Moderna surged 27.8% after the company sent its potential virus vaccine to government researchers for additional testing. The biotechnology company is one several drug developers racing to develop a vaccine.

Energy companies have been some of the hardest hit on worries that a weakened global economy will burn less fuel. Exxon Mobil is down 10.2% over the last four days, and the slump has wiped away nearly $26 billion in market value.

But the losses extend far beyond the energy sector. A rapidly spreading virus threatens factories, shipments of parts and customers for businesses around the world. At Apple, which said last week that the virus will force it to fall short of a previous quarterly revenue forecast, $158.6 billion in market value has vanished in the last four days.

One measure of fear in the market, which shows how much traders are paying to protect themselves from future swings for the S&P 500, touched its highest level since December 2018, when stocks were tumbling on worries about a possible recession.

The chief risk is that the stock market was already “priced to perfection,” or something close to it, before the virus worries exploded, according to Brian Nick, chief investment officer at Nuveen.

After getting the benefit of three interest-rate cuts from the Federal Reserve last year and the consummation of a “Phase 1” U.S.-China trade deal, investors were willing to pay high prices for stocks on the expectation that profits would grow in the future. The S&P 500 was recently trading at its most expensive level, relative to its expected earnings per share, since the dot-com bubble was deflating in 2002, according to FactSet.

If profit growth doesn’t ramp up this year, that makes a highly priced stock market even more vulnerable. After a growing number of companies have cut or withdrawn their revenue and profit forecasts for the year, analysts have slashed their expectations for S&P 500 earnings growth to 7.9% for this year, down from expectations of 9.6% at the start of 2020, according to FactSet.