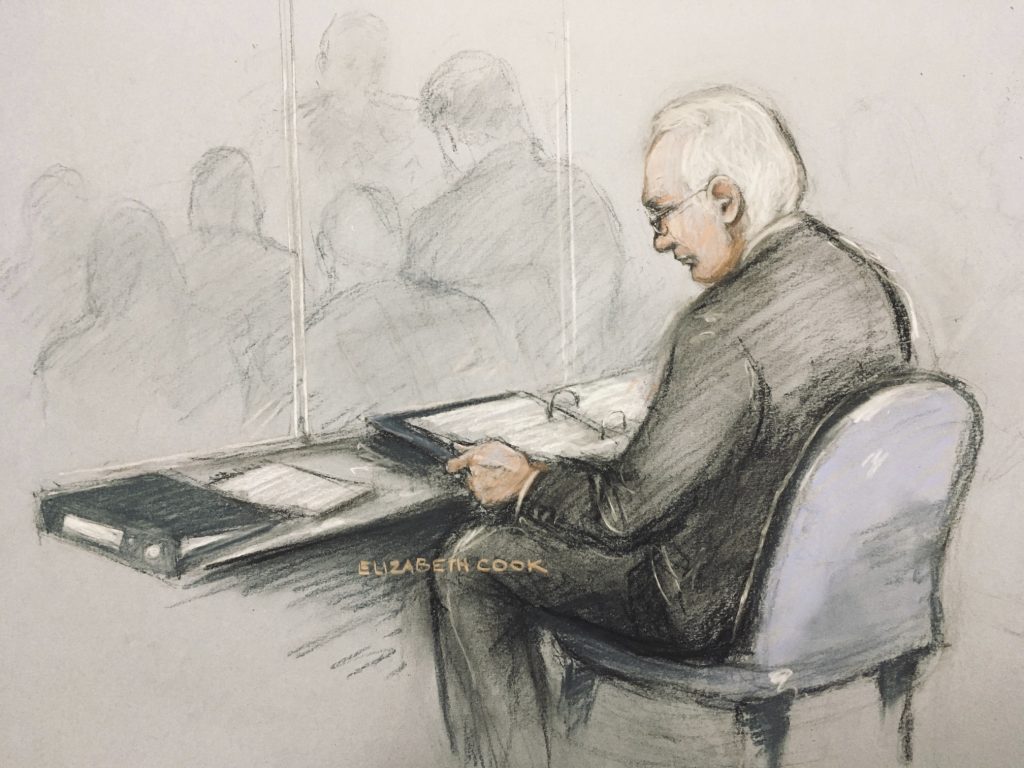 Truth-telling journalist or reckless criminal: A British judge was given two conflicting portraits of Julian Assange as the WikiLeaks founder’s long-awaited extradition hearing began Monday in a London court.

A lawyer for the U.S. authorities, who want to try Assange on espionage charges, said the Australian computer expert was an “ordinary” criminal whose publication of hundreds of thousands of secret military documents put many people at risk of torture and death.

“Reporting or journalism is not an excuse for criminal activities or a license to break ordinary criminal laws,” said James Lewis, a British lawyer representing the U.S. government.

Assange’s lawyer countered that the WikiLeaks publisher was being victimized by a “lawless” American government that wanted to make an example of him.

Attorney Edward Fitzgerald also said the “inhuman” conditions Assange would face in an American prison put him at high risk of suicide.

Dozens of Assange supporters protested outside the high-security Woolwich Crown Court, chanting and setting off a horn as District Judge Vanessa Baraitser began hearing the case, which is due to last several months.

Assange, 48, watched proceedings from the dock in the courtroom — he was brought there from Belmarsh Prison next door. He complained that he was having difficulty concentrating and called the noise from outside “not helpful.”

Assange has been indicted in the U.S. on 18 charges over the publication of classified documents. Prosecutors say he conspired with U.S. army intelligence analyst Bradley Manning to crack a password and hack into a Pentagon computer and release secret diplomatic cables and military files on the wars in Iraq and Afghanistan.

Assange argues he was acting as a journalist entitled to First Amendment protection, and says the leaked documents exposed U.S. military wrongdoing. Among the files published by WikiLeaks was video of a 2007 Apache helicopter attack by American forces in Baghdad that killed 11 people, including two Reuters journalists.

But Lewis said Assange was guilty of “straightforward” criminal activity in trying to hack the computer. And he said WikiLeaks’ activities created a “grave and imminent risk” to U.S. intelligence sources in Afghanistan and Iraq.

“By disseminating the materials in an unredacted form, he likely put people — human rights activists, journalists, advocates, religious leaders, dissidents and their families — at risk of serious harm, torture or even death,” the lawyer said.

Lewis said some informants and others who had been assisting the Americans had to be relocated after the leak, and others “subsequently disappeared.”

While acknowledging that U.S. authorities could not prove that anyone had been killed, Lewis said WikiLeaks’ information had helped America’s enemies. Documents from WikiLeaks were found in al-Qaida leader Osama bin Laden’s compound in Pakistan after he was killed in a U.S. attack, the lawyer said.

Assange’s lawyers argued that the U.S. charges — which carry a maximum sentence of 175 years in prison — are a politically motivated abuse of power.

Fitzgerald said Assange was suffering as a result of the “declaration of war on leakers and journalists” by the administration of President Donald Trump.

“Julian Assange has been made an example of,” Fitzgerald said. “He was the obvious symbol of all that Trump condemned.”

Fitzgerald said his client has been subjected to a long campaign of U.S. intrusion and harassment. The lawyer accused the U.S. intelligence services of directing a private security firm to spy on Assange while he was inside the Ecuadorian embassy, and said American authorities had pressured the South American country to withdraw his political asylum.

Fitzgerald said those were “the actions of a lawless state bent on adopting any means necessary to bring him down.”

Assange’s legal team also alleges that the Australian was offered a pardon by the Trump administration if he agreed to say Russia wasn’t involved in leaking Democratic National Committee emails that were published by WikiLeaks during the 2016 U.S. election campaign.

Assange’s lawyers say the offer was made in August 2017 by then-Republican Congressman Dana Rohrabacher, who visited Assange at the embassy and claimed to be acting with the approval of Trump.

The White House has called the claim a fabrication.

Fitzgerald noted that “President Trump denies everything — and we say, ‘Well, he would, wouldn’t he?'”

Fitzgerald said Assange was “an extremely vulnerable person with a long history of clinical depression and an established risk of suicide.”

Both sides in the case plan to present evidence for their allegations later in the hearing process.

Assange’s legal saga began in 2010, when he was arrested in London at the request of Sweden, which wanted to question him about unrelated criminal allegations. He refused to go to Stockholm, saying he feared extradition or illegal rendition to the United States or the U.S. prison camp at Guantanamo Bay, Cuba.

In 2012, Assange sought refuge inside the Ecuadorian Embassy, where he was beyond the reach of U.K. and Swedish authorities.

The relationship between Assange and his hosts eventually soured, and he was evicted in April 2019. British police immediately arrested him for jumping bail in 2012.

Sweden dropped the investigations in November because so much time had elapsed, but Assange remains in prison as he awaits a decision on the U.S. extradition request.

An end to the saga could still be years away. After a week of opening arguments, the extradition case is due to break until May, when the two sides will lay out their evidence. The judge isn’t expected to rule until several months after that, with the losing side likely to appeal.

Lewis, the attorney for the American government, said it wasn’t the role of the British court to determine whether Assange was guilty.

“This is an extradition hearing, not a trial,” he said. “The guilt or innocence of Mr. Assange will be determined at trial in the United States, not in this court.”