Netanyahu: If Rockets Don’t Stop, We Will Launch Major Campaign

During the meeting, Netanyahu directed that the military response to the rocket fire in Gaza continue.

Dozens of Red Alert sirens have been activated in southern Israel over the afternoon. No casualties have been reported so far, b’chasdei Shamayim.

Before the security meeting, Netanyahu toured the city of Ariel, saying, “We attacked both Gaza and Syria last night. I do not intend to let go of this. If they do not stop the fire completely, and I do not mean a day, two days, but at all, if there isn’t complete quiet, we will have to initiate the powerful, extensive campaign that we have prepared.

“These are not mere words,” said the prime minister. “Everyone in the Cabinet knows exactly what we are talking about. The campaign, which could become a war, is a last resort. I’m in no hurry to go there. I know the price our soldiers and the fallen families pay. It’s a last resort, but if there’s no choice, we’ll have to go there.” 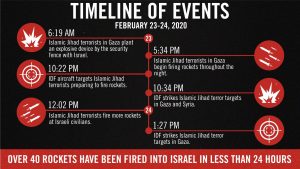