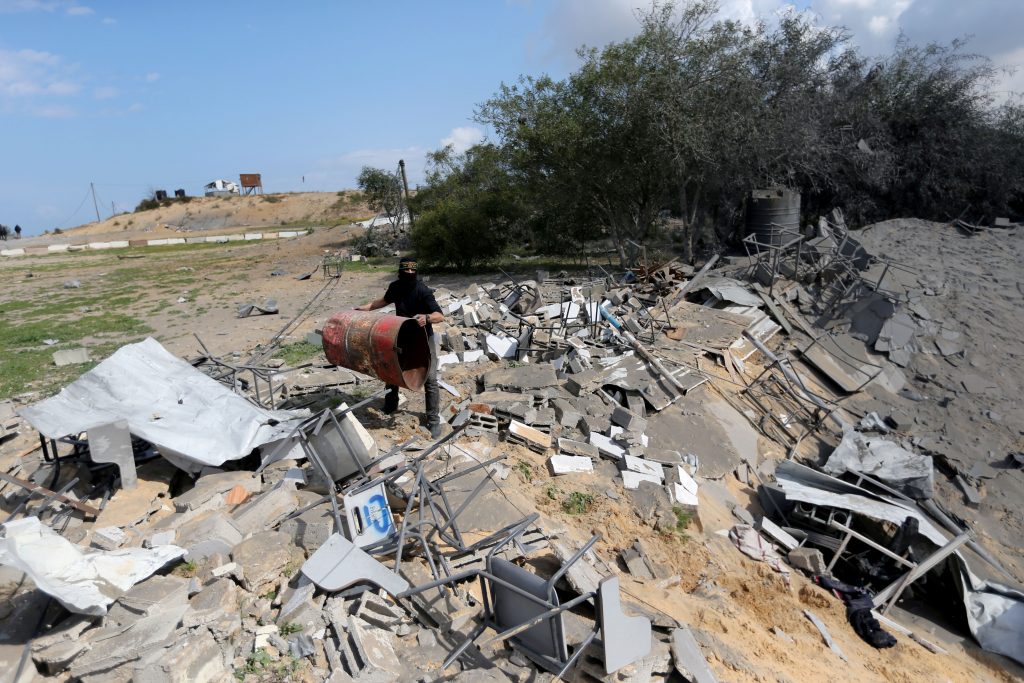 The IDF said early Monday that it struck Palestinian terror targets in Gaza and Syria in response to rockets fired toward southern Israel on Sunday evening, hours after Israel said it killed a Palestinian terrorist who tried to place a bomb along the Israel-Gaza barrier fence.

The IDF reported air raid sirens throughout southern Israel and said at least 20 rockets had been fired. There were no reports of damage or injuries on the Israeli side, but it was the heaviest barrage of rockets from the Gaza Strip in several months. Air raid sirens continued into the evening, and the Home Front Command ordered the suspension of classes in schools in southern Israeli communities near the Gaza Strip on Monday and prohibited large gatherings.

In response to the rocket fire, the IDF said aircraft struck “dozens of Islamic Jihad terror targets throughout the Gaza Strip” and a facility belonging to the terror group outside Damascus.

The Gaza Health Ministry reported that four Palestinians were treated at the Al-Shifa hospital in Gaza City for wounds caused by the Israeli strikes.

Islamic Jihad said in a statement that the airstrikes on Damascus killed two of its members, identifying them as Salim Salim, 24, and Ziad Mansour, 23. It did not disclose their nationalities or elaborate on their roles. It vowed to respond to the deaths of its members.

The Syrian military source said most missiles were destroyed before reaching their targets and the aftermath of the strike was being assessed.

Israel and the Islamic Jihad group engaged in a heavy round of fighting last November after the IDF eliminated a top Islamic Jihad commander.

Since then, Israel and Gaza’s more powerful Hamas group have been working through Egyptian mediators to cement an informal ceasefire. But Islamic Jihad has continued to try to carry out attacks.

The latest incidents come amid a relative lull along the security fence separating Israel from Gaza. Last week, Israel announced it would provide hundreds of additional work permits for Palestinians in the Gaza Strip, in a new step aimed at solidifying an informal ceasefire with Hamas.