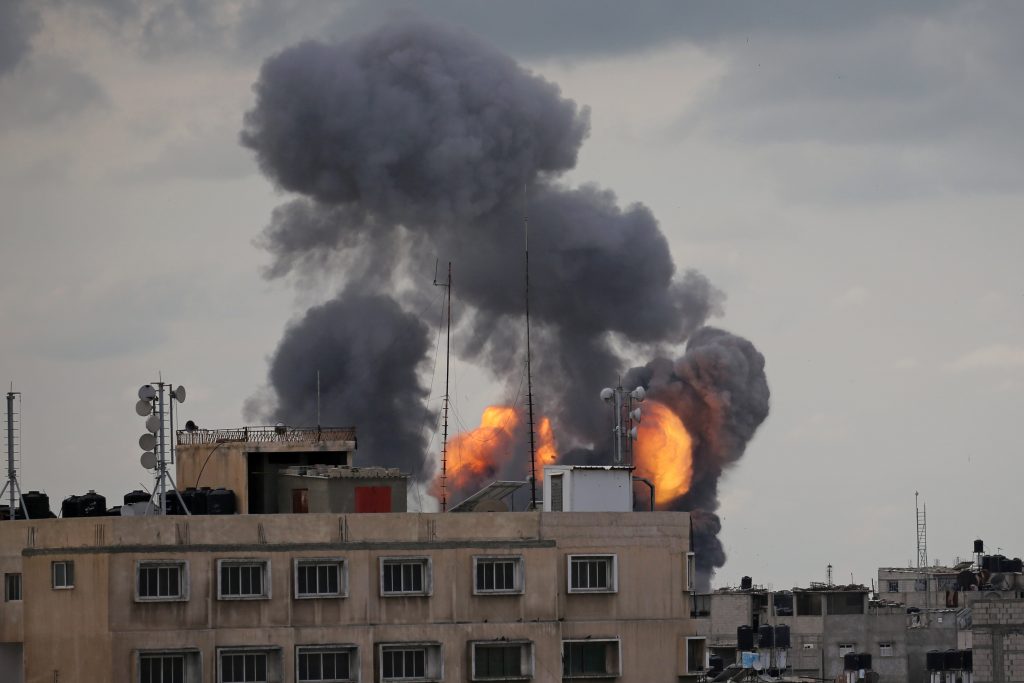 Air raid sirens sounded in southern Israel as jets and combat helicopters struck targets in Gaza following a barrage of 14 rockets at about midday. Twelve were shot down by Iron Dome interceptors, the military said. B’chasdei shamayim, no Israelis were reported injured.

Israeli forces targeted seven Palestinian Islamic Jihad positions along the Gaza border, the military said. A military base in Khan Younis, along with other assets belonging to the terror group, were hit. The PIJ has been taking responsibility for the attacks, while Hamas has been standing aside.

Palestinian media reports that no one was injured in the strike.

One Gaza rocket struck an empty playground in the town of Sderot on Monday, causing damage but no injuries, police said. Another rocket appeared to strike an open field outside the community of Nir Am in the Sha’ar Hanegev region, according to local officials.

Shrapnel from one of the Iron Dome interceptions also shattered a car windshield in the community of Nir Am, a Sha’ar Hanegev spokesperson said.

In its statements on the Monday airstrikes, the IDF notably mentioned only Islamic Jihad, not Hamas, a departure from longstanding policy which holds Hamas responsible for any attacks on Israel from Gaza, which Hamas controls.

While the rockets flew and Israeli Prime Minister Binyamin Netanyahu‏‏ threatened war on Monday, the U.N. envoy for Middle East peace, Nickolay Mladenov tweeted: “I call for an IMMEDIATE stop to the firing of rockets that only risks dragging Gaza into another destructive round of hostilities with no end in sight!” Mladenov says he will brief the UN Security Council later this evening on the violence in Gaza.

A statement from the Blue and White Party says Gantz and MKs Moshe Ya’alon and Gabi Ashkenazi will speak about the security situation later this evening. All three are former IDF chiefs of staff.

The Defense Ministry unit responsible for liaising with the Palestinians reimposed strictures on the Gaza Strip due to the flareup.

The Coordinator for the Government Activities in the Territories (COGAT) announced the shutdown of the Erez border crossing until further notice, that Gazans with “merchant” permits won’t be allowed into Israel, and that the fishing area in the Gaza Strip will be reduced to six nautical miles.