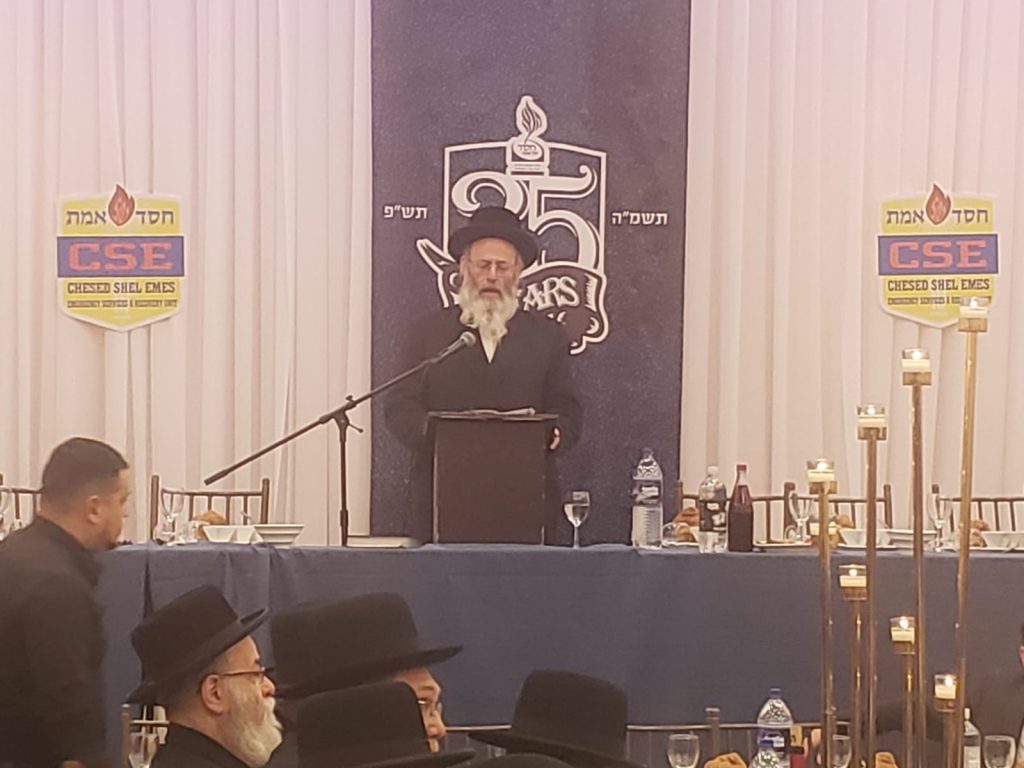 In the far corner of a shul in Manhattan is an old man who has been saying Kaddish every day for the last five years. When asked who he is saying it for, he calmly explains that he is saying Kaddish for none other than himself… because he knows that no one else will say it for him.

“Wouldn’t it be a wonderful world if every Jewish neshamah was guaranteed to have someone to say Kaddish for them and even learn for them when they go to Olam HaEmes?” asks Rabbi Mendel Rosenberg, Director of Chesed Shel Emes of New York. “And it would be a greater world if every neshamah had a designated plot to rest in?” Welcome to the world of true chesed for the departed, where no Jewish neshamah is left behind.

On Sunday, hundreds of volunteers gathered in Beis Esther Hall in Boro Park in honor of those who are no longer living. It was a siyum l’zecher nishmas those who have no one to learn in their memory.

Over the last four years, Chesed Shel Emes has buried over 400 meisei mitzvah, Jews who have died without designating a plot for their burial and have no family to make the necessary arrangements. This is in addition to the more than 2,000 plots already filled in the Chesed Shel Emes cemeteries designated for this purpose.

In the two decades since Chesed Shel Emes was founded, a siyum has been held every year. It is a solemn tribute to the work of Chesed Shel Emes as they provide dignity and compassion to those who have died and to their families. Last Sunday was no exception.

“This year alone,” explained an active member who fasted one day and learned as part of the siyum, “we assisted hundreds of cases, working with medical examiners, hospitals and families to assure proper burial and kvod hameis, and the Torah we learned on their behalf was done sincerely, to enhance the niftar.”

The siyum was made by Harav Yisroel Rosenberg, Dayan of Kehilas Viznitz in Williamsburg and brother of Rabbi Mendel Rosenberg, the director of Chesed Shel Emes. Rabbanim spoke of the importance of learning Torah for a meis, and how it elevates the neshamah to bring menuchah to the souls, all done with no knowledge of who the meisim are, all l’shem mitzvah.

Perhaps the most emotional moment of an already emotionally-charged evening was the presentation of the Chesed Shel Emes Award by Mr. Shulem Deutsch, father of one of the victims in the Jersey City shooting, to Rabbi Mendel Rosenberg. Mr. Deutsch spoke of his son and of how the members of Chesed Shel Emes were there for him in his most vulnerable moment, and how during and after the chaos, two Chesed Shel Emes volunteers stayed with him for many hours, assisting him with all issues relating the death of his son. “There are really no words to express my gratitude to Chesed Shel Emes,” Mr. Deutsch said. “I needed someone to hold my hands, and they were there and they never left.”

Rabbi Elisar Admon, Director of the Chevra Kadisha of Pittsburgh, gave a vivid account of his involvement with the crime scene in the aftermath of the shooting at the Tree of Life Congregation in October 2018, where 11 kedoshim were killed. Rabbi Admon, who as a member of Israel-based Zaka International, spent many years recovering bodies at the scenes of accidents and terrorist attacks, detailed the horror of entering this gruesome crime scene. It took a crew of Chevra Kadisha members more than eight hours to clean the scene properly. “It is still hard for me to hold back the tears,” he said.

Rabbi Admon became a focal point in the aftermath of that terror attack, displaying by his actions that day the dignity in which Judaism holds the deceased. He has since become a chaplain for the local and state police, as well as for the military and the FBI.

Among the many other speakers was the Kossover Rebbe, shlita, who gave his brachos, and gave his advice to those gathered for how to continue with their holy work.

The siyum was dedicated in memory of a pillar of chesed, Rabbi Yidel Aber Rosenberg, Z”l, father of Rabbi Mendel Rosenberg, who founded Chesed Shel Emes and raised millions of dollars for tzedakah throughout his lifetime.

The commitment and selflessness to stand up and say “I am ready to help my fellow Yid in life and in death” is the reason Chesed Shel Emes has grown from an idea into a nationwide movement. May its merits hasten the geulah sheleimah.