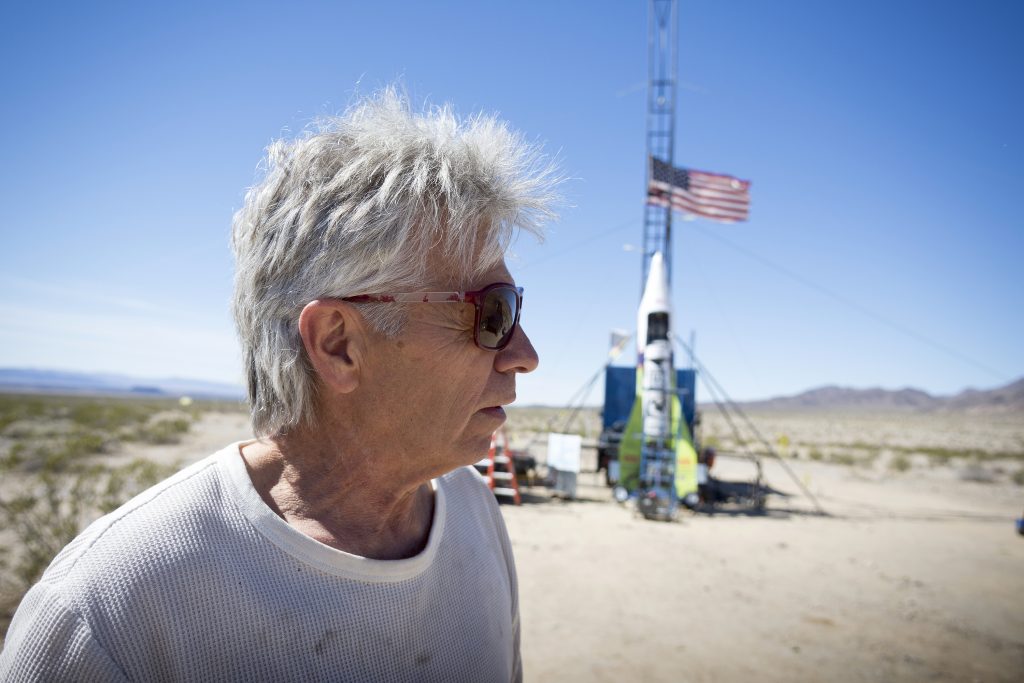 In December, buttressed by his conviction and advances in homemade rocketry, “Mad” Mike Hughes flipped on a camera and fantasized about the moment when he shows mankind that it lives on a verdant disk.

The plan was simple: fire into the sky on a steam-powered rocket and trigger a balloon to carry him to the Karman line, the 62-mile-high barrier that separates terrestrial from the extraterrestrial, filming the entire way. “For three hours, the world stops,” Hughes said during a live stream.

Hughes, a self-styled daredevil, flat-Earth theorist and limousine stuntman, died Saturday when his jury-rigged contraption propelled him on a column of steam, spiraled through the air and cratered into the sagebrush outside Barstow, California. He was 64.

“It was unsuccessful, and he passed away,” longtime collaborator Waldo Stakes told the Associated Press, declining to comment further.

A video of the launch and crash posted by freelance reporter Justin Chapman showed a green parachute falling away from the rocket moments after the takeoff. It is unclear why the rocket failed to return safely, as it had on earlier occasions. Hughes had ridden the rocket back to Earth on a parachute after other successful launches.

It was a tragic end for Hughes, perhaps the most visible and colorful advocate of the theory that Earth isn’t a sapphire-and-emerald globe revolving around a massive star but rather a flat plane with a tiny sun above it.

He dedicated the past several years of his life to proving the theory from a high perch.

In March 2018, he rode his garage-made rocket 1,875 feet above the Mojave Desert, reaching a speed of 250 mph, Stakes told the AP. It was the next step in Hughes’ mission to photograph the world. “It’ll shut the door on this ball Earth,” Hughes said then.

Hughes recently signed on with the Science Channel to document his project on a program the channel said in a statement.

“Our thoughts and prayers go out to his family and friends during this difficult time. It was always his dream to do this launch, and Science Channel was there to chronicle his journey,” the Science Channel said.

But a spokesperson for the network wouldn’t say if producers asked him to rein in his flat-Earth commentary for a channel that has science in its name – and at least theoretically would want to assure viewers the Earth is in fact round.

In a promo video ahead of the launch, Hughes does not mention his beliefs when he explains why he has endeavored on his now tragically futile mission.

Then Hughes expressed optimism for takeoff.

“We look forward to Saturday,” he said.