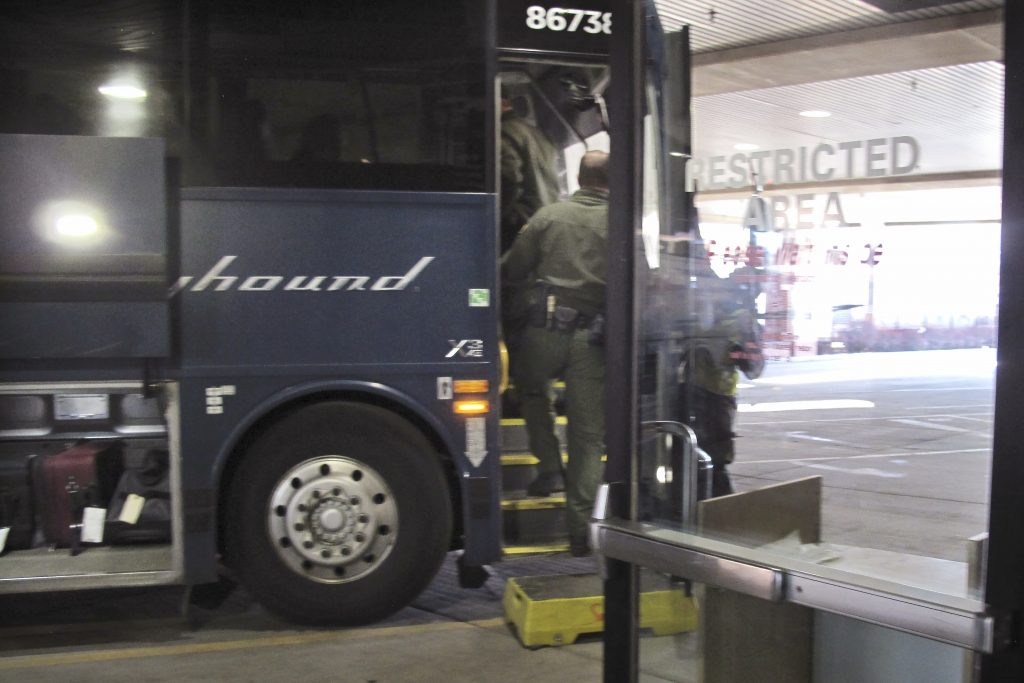 Greyhound, the nation’s largest bus company, said Friday it will stop allowing Border Patrol agents without a warrant to board its buses to conduct routine immigration checks.

The company’s announcement came one week after The Associated Press reported on a leaked Border Patrol memo confirming that agents can’t board private buses without the consent of the bus company. Greyhound had previously insisted that even though it didn’t like the immigration checks, it had no choice under federal law but to allow them.

In an emailed statement, the company said it would notify the Department of Homeland Security that it does not consent to unwarranted searches on its buses or in areas of terminals that are not open to the public — such as company offices or any areas a person needs a ticket to access.

Greyhound said it would provide its drivers and bus station employees updated training regarding the new policy, and that it would place stickers on all its buses clearly stating that it does not consent to the searches.

“Our primary concern is the safety of our customers and team members, and we are confident these changes will lead to an improved experience for all parties involved,” the statement said.

U.S. Customs and Border Protection, which includes the Border Patrol, did not immediately return a call seeking comment.

Greyhound has faced pressure from the American Civil Liberties Union, immigrant rights activists and Washington state Attorney General Bob Ferguson to stop allowing sweeps on buses within 100 miles of an international border or coastline. In many cases, the buses being checked were not crossing or even approaching an international boundary.

Critics say the practice is intimidating and discriminatory and has become more common under President Donald Trump. Border Patrol arrests videotaped by other passengers have sparked criticism, and Greyhound faces a lawsuit in California alleging that it violated consumer protection laws by facilitating raids.

“We are pleased to see Greyhound clearly communicate that it does not consent to racial profiling and harassment on its buses,” Andrea Flores, deputy director of policy for the ACLU’s Equality Division, said in an email. “By protecting its customers and employees, Greyhound is sending a message that it prioritizes the communities it serves.”

Ferguson said in an email his office will follow up with Greyhound to ensure compliance.

“Today’s announcement from Greyhound confirms what should have been obvious to the company since I contacted them a year ago – it has both the power and the responsibility to stand up for its customers, who suffered for far too long from Greyhound’s indifference to CBP’s suspicionless bus raids and harassment,” he said.

The Border Patrol has insisted that it does not profile passengers based on their appearance, but instead asks all passengers whether they are citizens or in the country legally. The agency says the bus checks are an important way to ferret out human trafficking, narcotics and illegal immigration.

Some other bus companies, including Jefferson Lines, which operates in 14 states, and MTRWestern, which operates in the Pacific Northwest, have already taken similar steps to those announced by Greyhound. Flores said the ACLU would continue to push others to follow suit.

The memo obtained by the AP was dated Jan. 28, addressed to all chief patrol agents and signed by then-Border Patrol Chief Carla Provost just before she retired. It confirms the legal position that Greyhound’s critics have taken: that the Constitution’s Fourth Amendment prevents agents from boarding buses and questioning passengers without a warrant or the consent of the company.

“When transportation checks occur on a bus at non-checkpoint locations, the agent must demonstrate that he or she gained access to the bus with the consent of the company’s owner or one of the company’s employees,” the memo states. An agent’s actions while on the bus “would not cause a reasonable person to believe that he or she is unable to terminate the encounter with the agent.”

Greyhound previously argued that case law, including a 1973 Supreme Court ruling, did not extend the Fourth Amendment’s protections to commercial carriers.