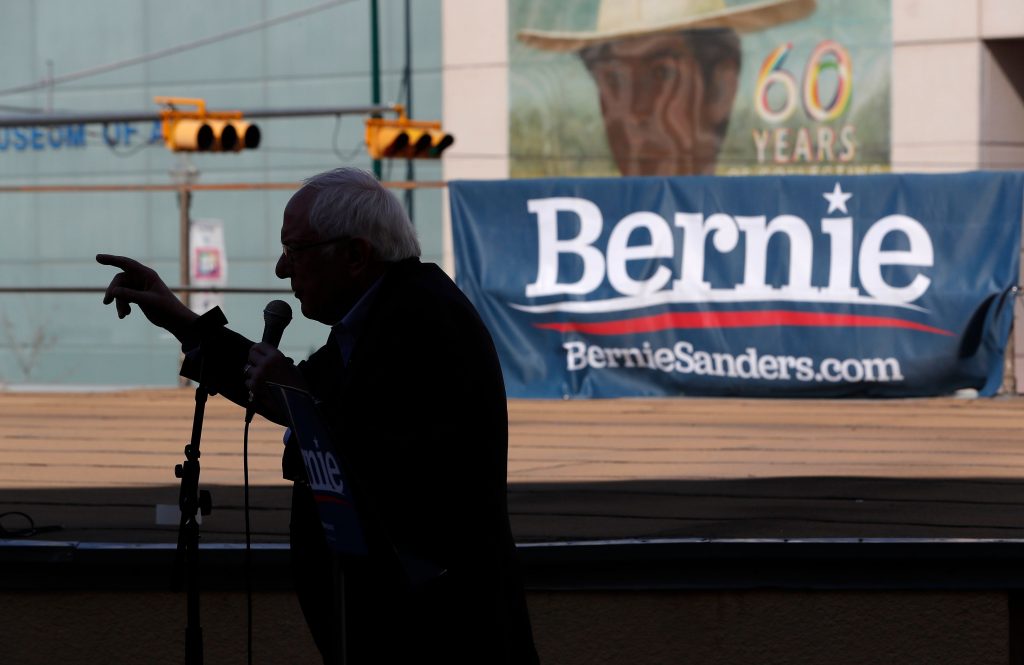 Bernie Sanders‘ convincing win in the Nevada caucuses signaled his campaign is gathering strength and reaching voters who had previously eluded him, putting him on a path – for now – toward the Democratic presidential nomination.

The self-described democratic socialist’s triumph on Saturday left all of his rivals contending they were best positioned to curb his momentum. With the South Carolina primary a week away and the big Super Tuesday nominating contests days later, here is what the Nevada results mean for the top candidates:

Although Sanders had been poised to do well in Nevada, the senator from Vermont may have outpaced expectations by broadening his coalition of voters.

According to caucus entrance polls conducted by Edison Research, Sanders crushed the rest of the field with Latino voters and finished second only to Joe Biden with black voters. He was the top choice of voters younger than 65. He also won with college graduates and those without a degree, both men and women.

Sanders was easily the top pick of voters who consider themselves independents. And perhaps most crucially for his campaign, he was favored over Biden among voters whose top priority is defeating President Donald Trump in the November general election.

All of it is good news for Sanders. If he can pull off a surprise win in South Carolina on Feb. 29, he will be heading into the Super Tuesday contests on March 3 on a roll.

The former vice president’s caucus night rally in Las Vegas was jubilant, with someone in the crowd calling Biden “the comeback kid” as early results showed him in second place.

Not long ago, the former vice president was the favorite in Nevada. But after disappointing finishes in Iowa and New Hampshire, Biden’s showing in Nevada was strong enough for him to declare his campaign revived.

Sanders easily beat Biden among Latino voters, 53% to 16% according to entrance polls, leaving Biden to soak up older voters and moderates to try to remain competitive. Biden topped Sanders among black voters, 36% to 27%.

Now Biden, vice president under former President Barack Obama, faces perhaps the most critical week of his candidacy. Anything less than a win in South Carolina, with its large African-American electorate, will make it that much less likely that he – or any other contender – will be able to keep Sanders from the nomination.

The former South Bend, Indiana, mayor continues to surprise. His apparent third-place finish in Nevada keeps him in the game going forward, but his failure to broaden his appeal may limit his growth potential.

Buttigieg continues to do well with white, educated moderate voters, but remains deeply underwater with non-white voters. According to entrance polls, he received support from just 9% of Latino voters and 2% of black voters.

That bodes poorly for Buttigieg not only in South Carolina, but also in ultra-diverse Super Tuesday states such as California and Texas.

Possibly running out of time, Buttigieg sharpened his attack on Sanders on Saturday. “Senator Sanders believes in an inflexible, ideological revolution that leaves out most Democrats, not to mention most Americans,” he told supporters in Las Vegas.

Warren’s assertive debate performance on Wednesday led to speculation that the senator from Massachusetts had jump-started a stalled campaign. Her fundraising picked up, and she received a wave of new media attention.

None of that appeared to translate into much for Warren in Nevada, where about half of the votes in the nominating contest were cast before the debate in early voting. Warren looked headed for a fourth-place finish. She lost ground with college-educated white women, part of her base, getting 18% of their votes compared to Sanders‘ 22% and Amy Klobuchar’s 19%.

Warren appears to be looking past South Carolina to Super Tuesday. An infusion of cash has allowed her to purchase new ad buys across the country, and her campaign contends she will be one of a few candidates remaining in the race afterward.

“We believe the Nevada debate will have more impact on the structure of the race than the Nevada result,” her campaign manager, Roger Lau, said on Twitter.

Coming off a surprise third-place finish in New Hampshire, Klobuchar ended up being a non-factor in Nevada. She struggled at Wednesday’s debate and was also roundly mocked for forgetting the name of the Mexican president.

Like Buttigieg, Klobuchar has made almost no inroads with non-white voters. According to Nevada entrance polls, she received just 4% of the Latino vote and 3% of the black vote.

Klobuchar likely will have no traction in South Carolina. She has to hope she can win her home state of Minnesota on Super Tuesday to have any kind of a path forward, but she remains a possible candidate to drop out of the race before then.

The former New York mayor was not on the ballot in Nevada, but his performance in the Las Vegas debate may have damaged his candidacy. A Morning Consult poll released on Friday showed his support among Democrats dropping three percentage points and his overall favorability plunging.

The best news for Bloomberg may have been Sanders’ dominating finish in Nevada, which likely will give fresh urgency to efforts among Democratic moderates to stop the senator. The billionaire Bloomberg, who has spent more than $400 million of his personal fortune on his campaign, still has his checkbook open and is locked in on making an impact on Super Tuesday, the first set of primaries in which he has chosen to compete.