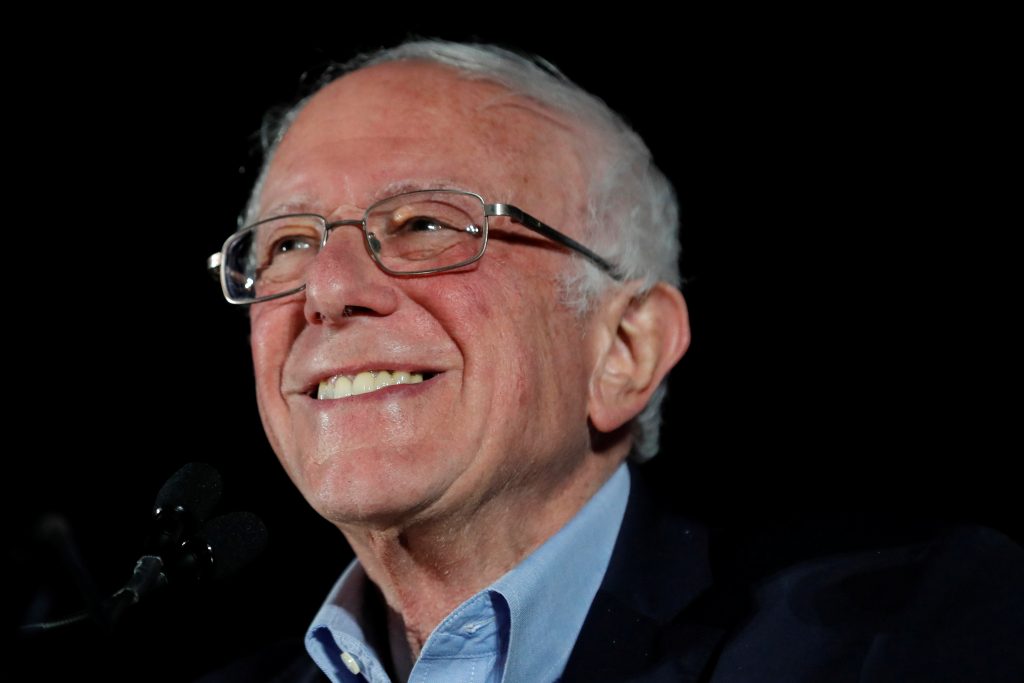 Bernie Sanders appeared headed to a decisive victory in the Democratic presidential caucuses in Nevada on Saturday, and early returns showed Joe Biden possibly landing a second-place finish that would give his struggling campaign new hope.

Fox News and MSNBC projected Sanders as the winner in Nevada, where he was leading with more than 40% of the final round of popular votes with about 10% of precincts reported, four hours after the caucuses began.

But there were long delays in the reporting of fresh results.

The win in Nevada will further boost the front-running candidacy of Sanders, a U.S. senator from Vermont, after his strong showings in Iowa and New Hampshire earlier this month. He was buoyed by what entrance polls showed was strong support for a government-run Medicare for All healthcare plan like the one he has proposed.

Biden, the former vice president, had been in desperate need of a strong showing after poor finishes in the first two contests. He was a distant second to Sanders with 19% of the vote with 10% of the precincts reported but ahead of former Mayor Pete Buttigieg of South Bend, Indiana, in third with 17%.

“The press is ready to declare people dead quickly, but we’re alive and we’re coming back and we’re gonna win,” Biden told supporters in Las Vegas.

Senator Elizabeth Warren was fourth with 11% in Nevada, where voters poured into more than 250 sites around the state to make their pick for a Democratic challenger to President Donald Trump in the Nov. 3 election.

After a technical meltdown delayed results during the Iowa caucuses, Nevada Democratic Party officials promised that a revised reporting system using a telephone hotline and photos of caucus reporting sheets would ensure a smoother process.

But precinct chairs at some caucuses reported long waits on the phone lines. Larry Van, a retired pharmacist who was the volunteer secretary at a precinct that went to Biden, said he called the phone number to report results eight times before he eventually got through.

In the final result of a caucus at the famed Bellagio hotel on the Las Vegas strip, Sanders finished with 76 votes, Biden had 45 and no other candidate ended with a vote.

Workers at the hotel, who are members of the Culinary Workers Union, streamed out of the caucus after backing Sanders despite their leadership expressing reservations about his healthcare plan.

“I went for Bernie. I’m not big into politics, but I like the things he’s going for: student loan debt, schools, free healthcare,” said Aleiza Smith, 22, a housekeeper at the Bellagio.

Four days of early voting in Nevada this week drew more than 75,000 Democrats, more than half first-time voters, putting the party in position to surpass the turnout record of 118,000 in 2008, when Barack Obama’s candidacy electrified the party.

But those early votes had to be counted along with those cast on Saturday, complicating the process.

An entrance poll by the Edison Research agency showed six in 10 Nevada voters at the caucuses backed the Medicare for All proposal, a version of which is also supported by Warren.

Six out of 10 caucus-goers wanted someone who can beat Trump more than someone who agrees with them on major issues, according to the poll.

The entrance poll also showed that Sanders, a self-identified democratic socialist, may be expanding his appeal beyond his core base of supporters led by youth and Hispanics.

Sanders was leading in Nevada across all age groups except for those older than 65. Around 54% of Latino voters said they backed him, while 24% of college-educated white women and 34% of those who have a union member in their families supported him.

The Nevada caucuses came a day after news broke that Sanders had been briefed by U.S. officials that Russia was trying to help his campaign as part of an effort to interfere with the 2020 presidential election.

While Sanders’ rivals tried to blunt his momentum in the caucuses, they each faced significant challenges of their own.

Biden and Warren were looking to jump-start struggling campaigns after poor finishes in the first two states, while Buttigieg and Senator Amy Klobuchar are hoping to prove they can appeal to Nevada’s more diverse electorate.

Sanders spoke to about 2,000 people in Las Vegas on Friday night, revving up the crowd with vows to take on “the corporate elite” and the “whole …1%”.

Trump, who lost Nevada to Democrat Hillary Clinton in 2016, tweeted on Saturday that he expected to win in Nevada in the general election in November and alluded to the reports that a Russian disinformation effort was supporting Sanders.

At a Democratic debate in Nevada on Wednesday, candidates launched scathing attacks on Michael Bloomberg, the billionaire former mayor of New York City, who has been rising in the polls on the back of a self-funded advertising blitz but is not competing in Nevada.

The next primary will be on Feb. 29 in South Carolina, followed by the Super Tuesday contests in 14 states on March 3 that pick more than one-third of the pledged delegates who will help select a Democratic nominee.

Nevada is the first nominating state with a diverse population after contests in predominantly white Iowa and New Hampshire.