Israel Ministry: Hundreds of Israelis May Have Been Infected With Coronavirus
Israel 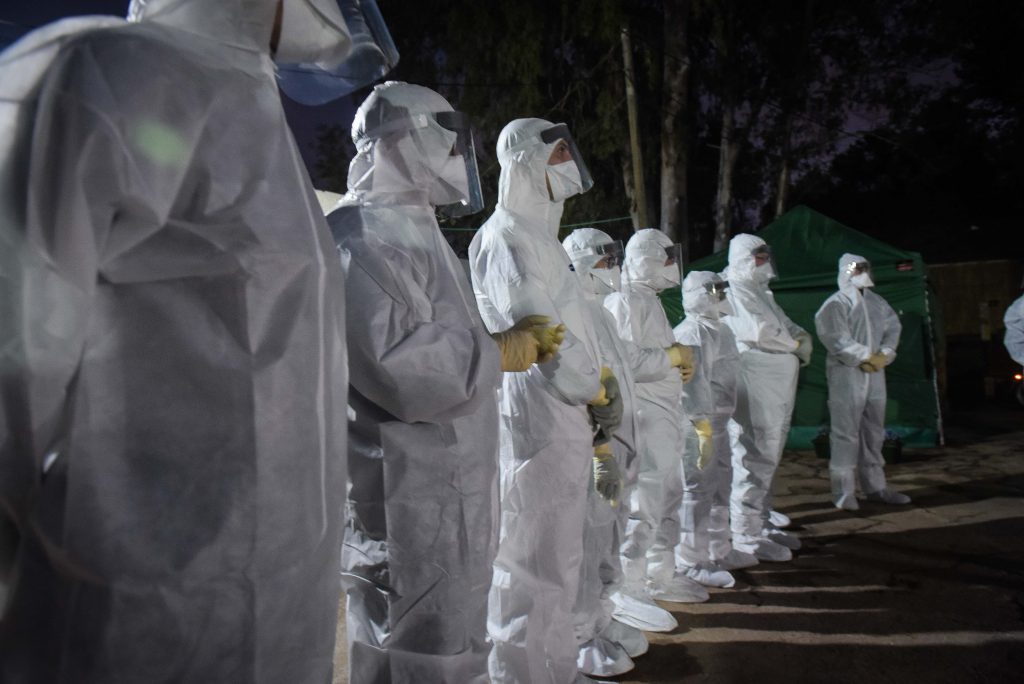 Health Ministry officials held an emergency meeting Motzoei Shabbos to discuss ways to prevent the spread of coronavirus in Israel, after the first cases of the virus were reported in Israel. Over the weekend it was revealed that nine South Korean tourists who had been in Israel in recent weeks had been infected with coronavirus. The ministry is tracking down hundreds of Israelis who may have had contact with them, and may require many of them to be isolated. Among them are nearly 100 students who were at various sites at the same time as the tourists.

“Anyone who was in contact with this group must self-isolate at home for 14 days,” said Health Ministry Director-General Moshe Bar-Siman Tov. “As a result of contact with this group, the chances that an Israeli has contracted coronavirus have jumped significantly. We are working on the assumption that the tourists were already infected when they were in Israel.”

The ministry is aware of a group of 30 students who were in Tel Be’er Sheva National Park at the same time as the Korean group, and the ministry has asked the students’ families to keep them at home for the next two weeks. Soroka Hospital in Be’er Sheva reported over the weekend that a man in his 50s – apparently one of the teachers who led the student group – checked himself into the hospital after suffering from symptoms similar to those of coronavirus. The hospital is attempting to diagnose whether he is suffering from the virus, or the flu. An additional 66 members of a student group who were in contact with the group at Masada will also enter isolation, Kan News reported Motzoei Shabbos.

The nine tourists returned home from an eight-day trip to Israel a week ago, and all are in the hospital in South Korea after having been diagnosed with coronavirus, the BBC’s South Korean service reported Saturday. They were in Israel on a church-sponsored trip, together with 77 other tourists. The Health Ministry said that the group was in Israel between February 8 and 15, well into the period when coronavirus was spreading throughout Asia.

Based on the group’s itinerary, the ministry is seeking to track down Israelis who had contact with the group – people who were within two meters of them for periods of at least 15 minutes – in order to examine them for symptoms, and isolate them. Among the places where the group stayed, and where Israelis may have become infected, are hotels in Netanya, Be’er Sheva, Nazareth, the Dead Sea, and Yerushalayim. They also visited various churches, as well as Masada, Timna Park near Eilat, and sites in the Galilee. The group also visited cities in Palestinian Authority-controlled areas, including Shechem, Chevron and Yericho. The PA has not reported any cases yet, but has set up an isolation site for potential victims in Yericho.

As a result of the reported infection, the Health Ministry is considering adding South Korea to its list of Asian countries from which visitors are currently banned. The Population Authority decided Motzoei Shabbos not to allow entry to a group from South Korea that arrived at Ben Gurion Airport at about 7:00 p.m. The group was deplaned and kept in an isolated area, and was to be returned to South Korea later Motzoei Shabbos.

Meanwhile, 11 Israelis who were aboard the Princess Diamond cruise ship and returned to Israel early Friday spent their first full day in isolation. One of the passengers showed signs of infection, the ministry said Friday. The rest are to remain in isolation in Sheba Hospital outside Tel Aviv for the next two weeks. Four other Israelis were removed from the ship after they displayed symptoms and were diagnosed as having contracted the virus. They remain in a hospital in Japan, although officials said they were hopeful the four could be returned to Israel next week.

Speaking Motzoei Shabbos, Bar-Siman Tov said that ministry orders for potential victims to enter into self-isolation had the force of law. “Anyone who does not pay attention to isolation instructions will be punished. We have begun enacting systems that will require individuals to remain in isolation. All orders are issued based on legal requirements. We expect people to cooperate, and those who do not will be punished for endangering the public,” he added.