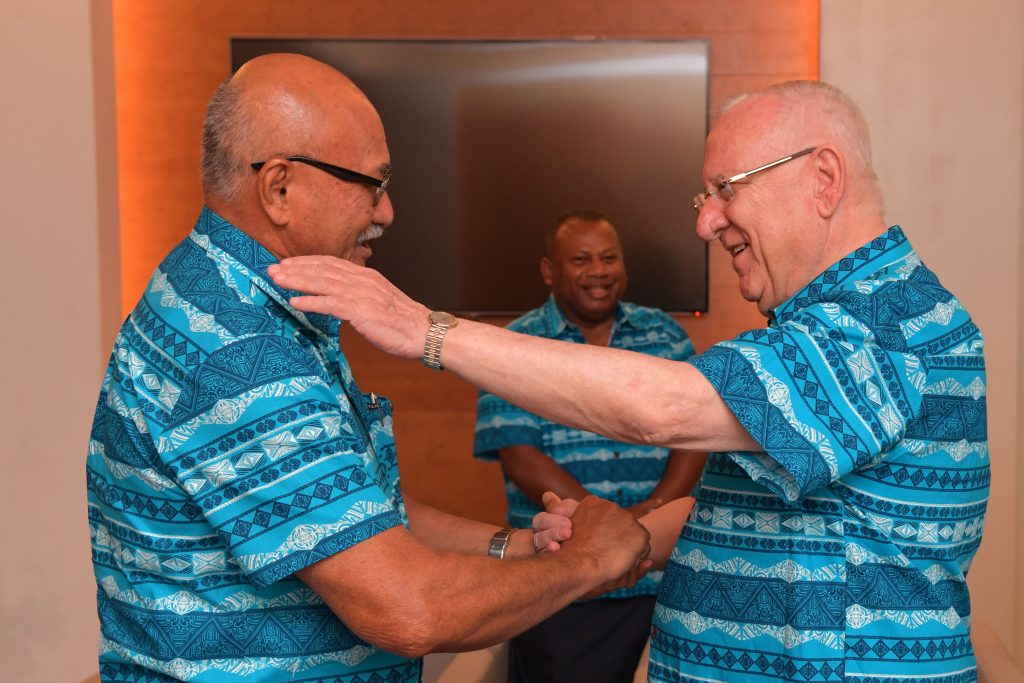 Israel’s President Reuven Rivlin arrived on Thursday in Fiji on his way to an official visit to Australia.

During his visit, the president, together with the prime minister of Fiji, led a summit meeting with Pacific Island states, the first of its kind. The summit, held in Nadi, Fiji, was attended by leaders from Papua New Guinea, Samoa, Vanuatu, Tuvalu, Tonga and Palau.

Before the summit started, the president was received in a Fijian ceremony where he was presented with a lei, a traditional welcome necklace of flowers. During the ceremony, the soldiers of the honor guard sat in their traditional dress and accompanied the welcome with their singing. The president was served with kava, the national drink which is made from the yangona root, as a sign of friendship between the nations and to welcome him on his visit. The president was presented with an ancient whale tooth, coconuts in palm baskets, roots of local plants and even a lamb that was prepared in honor of the event. They represented the blessings of the Fijian people on the arrival of the president and the hopes for strengthening relations between the countries.

At the end of the ceremony, the president held a working meeting with Prime Minister Frank Bainimarama of Fiji, and at the end of their meeting the two gave joint statements to the press. The president noted the successful cooperation between the states, despite the great distance. He thanked the prime minister for Fiji’s contribution to the U.N. peacekeeping forces around the Middle East and added, “I know that you are very familiar with our region from your time in the Multinational Force and Observers in Sinai.”

The president noted the range of fields in which the countries cooperate, as part of which Israel has assisted Fiji and Pacific Island nations with natural disasters, with health and airport security and in advanced agricultural and water management studies.

“I am proud to announce today the establishment of one hundred new scholarships for students of agriculture from the Pacific Islands to train at the Arava College in Israel, and that the State of Israel will open a center for excellence and innovation for the Pacific Island states, in collaboration with the University of the South Pacific.”

“We were also happy to support Fiji’s election to the U.N. Human Rights Council, and your presidency of the U.N.’s Climate Change conference. We hope that Fiji will stand with Israel against the gross anti-Israel discrimination at the U.N., especially at the Human Rights Council,” the president noted.

The Fijian prime minister thanked the president for what he described as a “historic” visit, noting that Fiji had been waiting for such a high-level visit from Israel since 1986. “This summit is very important to us as another stepping stone in strengthening the relations between us. Fiji will continue to pray for the peace of the Middle East region,” said the prime minister.