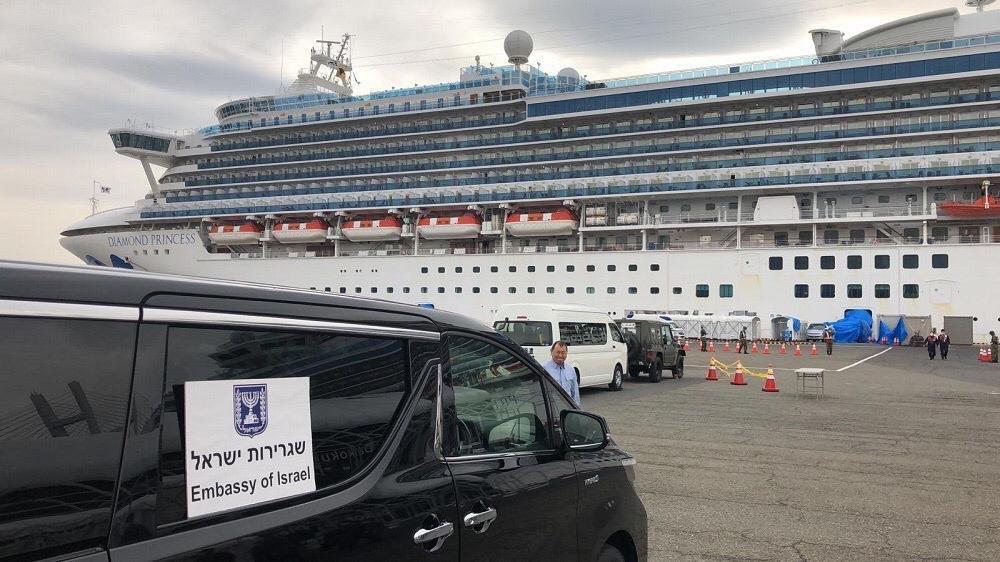 The Health and the Foreign Ministries reported Thursday morning that after another medical examination, a fourth Israeli was diagnosed with coronavirus on the Diamond Princess cruise ship moored near Tokyo.

He is expected to be taken off the ship to continue treatment at a hospital in Japan.

All others Israeli passengers not infected with the coronavirus have been granted permission to leave. Staff from the Israeli embassy in Tokyo was waiting for them on the dock.

The other Israelis are set to leave for Israel Thursday night. Ahead of their return flight to Israel, they are to undergo medical examinations to make sure that those who are released do not suffer from the virus.

Hadassah Medical Center infectious disease specialist Prof. Ron Nir-Paz, who is on a mission of the Health Ministry in Japan, said, “Yesterday focused on medical counseling for embassy staff and the deputy director general of the Health Ministry regarding the procedure to transfer Israelis from the ship to Israel. This is a complex operation that will take place today in the coming hours, and is accompanied by the embassy together with the Japanese Health Ministry and the Japanese authorities.”

Prof. Nir-Paz contributes from his experience as an expert in infectious diseases, including advice on passenger jets and infection prevention and spread. He will remain in Japan to continue to accompany the Israelis who were found to be positive with coronavirus, who are hospitalized in isolation at both military hospitals in Japan.

Meanwhile, two elderly coronavirus-infected passengers from a cruise ship have died and two more government officials have been infected, the Japanese government said on Thursday, as more passengers disembarked after two weeks’ quarantine.

More than 620 of the passengers on the Diamond Princess liner have been infected on the ship, which has been quarantined since Feb. 3, initially with about 3,700 people on board.

The two passengers were an 87-year-old man who’d suffered from heart ailments and bronchitis, and an 84-year-old woman. Both tested positive for the virus, although the woman’s cause of death was listed as pneumonia, the Health Ministry said.

It added that one Health Ministry official and another from the Cabinet Secretariat were confirmed to be infected with the virus after both had spent time working on the Diamond Princess. Three officials had previously been infected.

Japanese media reported that 29 people were in serious condition, including one who had earlier tested negative for the virus, which the Health Ministry could not immediately confirm.