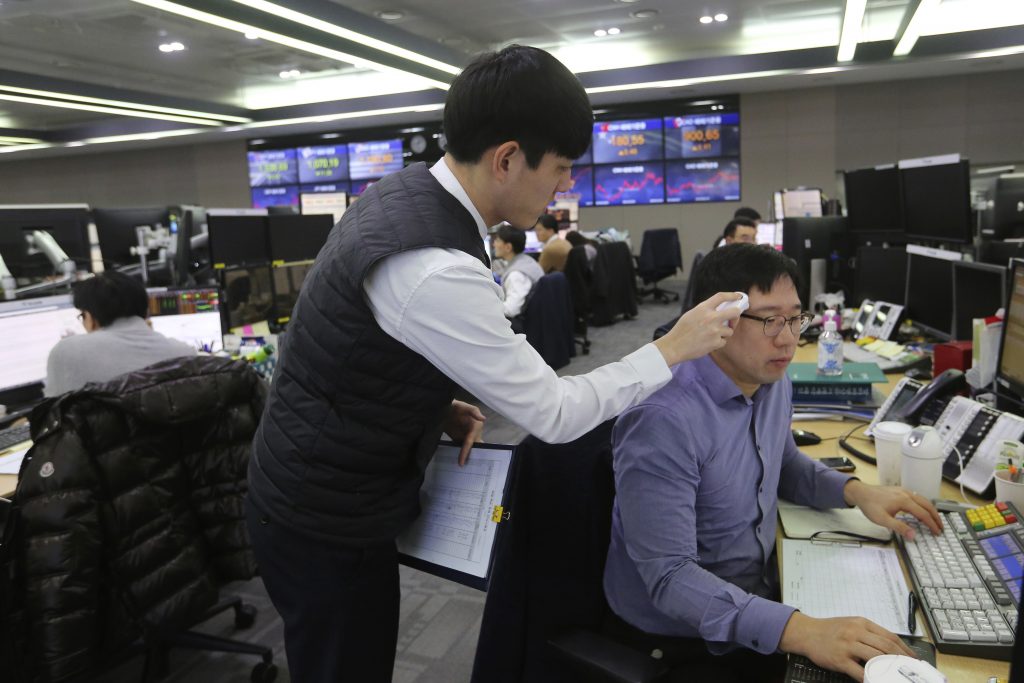 Shares were mixed Thursday in Asia after Wall Street recovered to record highs, with the Shanghai benchmark jumping nearly 2% after China’s central bank cut interest rates to help ease credit for companies stricken by the virus outbreak centered on the city of Wuhan.

Technology stocks led the rally, as Apple rallied to recover most of its loss from the prior day. It dropped Tuesday after warning that revenue this quarter would fall short of forecasts due to the viral outbreak centered in China.

Worries remain about how disruptive the virus will be for manufacturing, travel and other economic activity across the region, but markets around the world rose as the number of new virus cases in China fell Wednesday. Expectations are also high that China and other central banks around the world will limit the economic damage through injections of cash into markets, lower interest rates and other stimulus measures, said Shawn Cruz, manager of trader strategy at TD Ameritrade.

“I think markets are a little too rosy now,” Cruz said. “There is this assumption that the actual impact won’t be much, and if there is one, central banks will be able to step in and keep us alive.”

The companies most at risk to slowdowns in China are also those that have grown to become some of the biggest components of the S&P 500. That gives their movements outsized effects on index funds, Cruz said.

For now, at least, investors seem to be confident that China’s central bank, the Federal Reserve and other central banks can prop up the economy.

China cut its loan prime rate to 4.05% from 4.15% on Thursday, a move aimed at mitigating the economic damage from the COVID-19 sickness that is spreading mostly in China.

Low rates have been a key underpinning for the strong U.S. stock market, which has rallied even though growth in corporate profits has been weak. The Fed released minutes Wednesday afternoon from its last policy meeting, where officials said they see the current level of monetary policy “as likely to remain appropriate for a time,” at least until data on the economy shows a change in momentum.

Treasury yields rose Wednesday morning following a pair of stronger-than-expected reports on the U.S. economy. One showed stronger housing construction data than economists expected, while another showed inflation was higher than expected on the wholesale level in January.

But yields moderated as the day progressed. The yield on the 10-year Treasury was steady at 1.56% on Thursday.

A sluggish global economy has put the spotlight on companies that are nevertheless able to produce strong revenues and profit growth, and that’s why tech stocks have been the market’s biggest stars for years.

On Wednesday, they once again helped pace the market. Besides Apple’s 1.4% gain, Nvidia jumped 6.1% and Advanced Micro Devices rose 3.5%. As a group, tech stocks in the S&P 500 climbed 1.1% for the second-largest gain among the 11 sectors that make up the index.

Tech stocks in the S&P 500 have surged 47.7% over the last 12 months, nearly double the rise for any of the index’s other sectors.

Energy stocks in the S&P 500 jumped 1.3%. They climbed with the price of crude oil, while Concho Resources leaped 7.6% for the biggest gain in the S&P 500 after reporting stronger quarterly results than analysts expected.

The sector has been struggling as worries about weaker demand have weighed on the price of oil. Energy stocks have lost 15.5% over the last 12 months, the only sector in the S&P 500 to be down over that time.