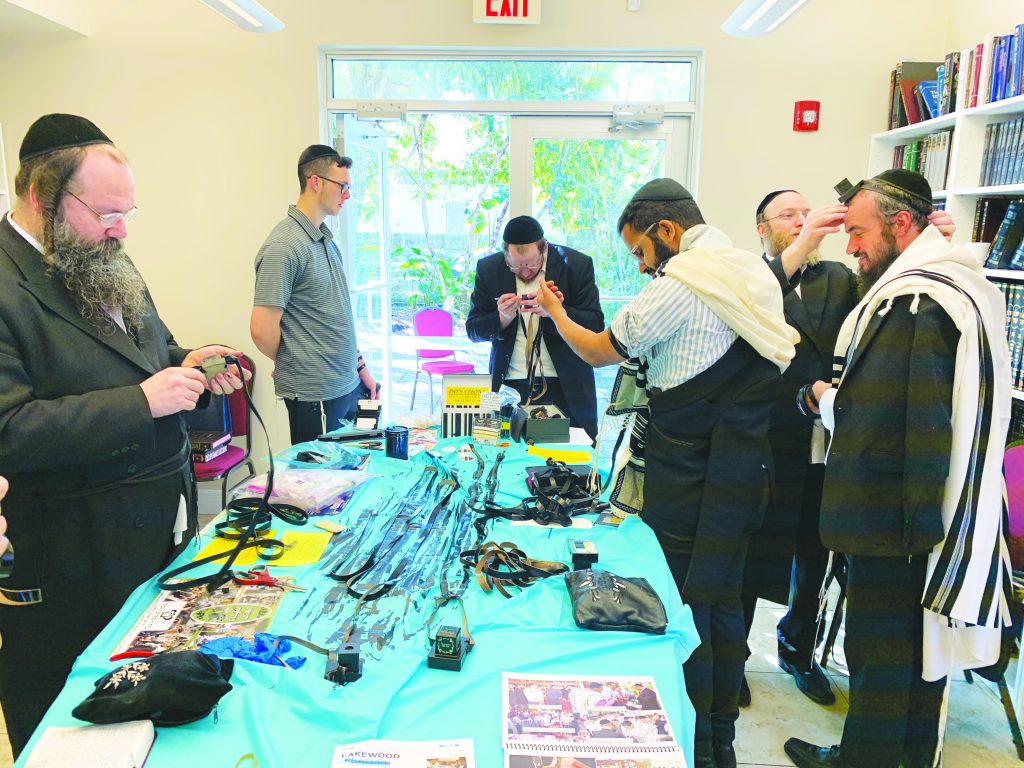 On Sunday, Feb. 2, South Florida communities were privileged to host a unique and exceptional program called the Tefillin Awareness Project–Hanacha K’Halacha. Developed by Mr. Avrohom B. Schachter, a Brooklyn askan, about thirteen years ago, the program raises awareness of the proper way to perform the precious and almost daily mitzvah of tefillin.

This is the third time that TAP had traveled to Florida. This year, it was sponsored by Bobby and Shelley Rosenberg, l’iluy nishmas their parents, Gedalia ben Sholom Halevi, z”l, and Toiba Feiga bas Zelig, a”h.

At noon, three of the sofrim continued on to Yeshiva Tiferes Torah of Boca Raton, where the talmidim, members of the hanhalah, and members of Young Israel of Boca Raton were thrilled to be able to take advantage of this important service.

On Monday morning, the sofrim set up shop at Bais Mordechai, Rabbi Smith’s kollel boker in West Hollywood, inspecting tefillin at both of the shul’s minyanim. From there they traveled to the Talmudic University, under the leadership of its Rosh Yeshivah, Harav Yochanan Zweig.

On Tuesday, the sofrim were stationed at the Miami Beach Community Kollel, under the leadership of its Rosh Kollel, Harav Yaakov Gross, where the program was welcomed both by kollel members and visitors. After looking around in amazement, Mr. Furman, a Miami resident, exclaimed, “This is the reason we left Chile!” All in all, hundreds of Florida residents and snowbirds had their tefillin checked. Unfortunately, some were found completely passul.

During their visit, the sofrim were also available to check mezuzos, offering a golden opportunity for vacationers who own condos in Miami. According to Mr. Schachter, over 75 of the 700 mezuzos that were checked turned out to be passul.

The overall response to the program was overwhelming. “I point out,” says Mr. Schachter, “how we’re all so busy choosing a kosher esrog for Sukkos and the most mehudar matzos for Pesach. But the mitzvah of tefillin is a d’Oraisa that is performed 300 days each year! Too many of us are simply not placing our tefillin on properly or are wearing straps that are stretched out, discolored, or otherwise unfit. The greatest aspect of the entire project is the awareness that is created.”

For more information about the Tefillin Awareness Project, contact tefillinawareness@gmail.com, or text/call 646-776-2220.