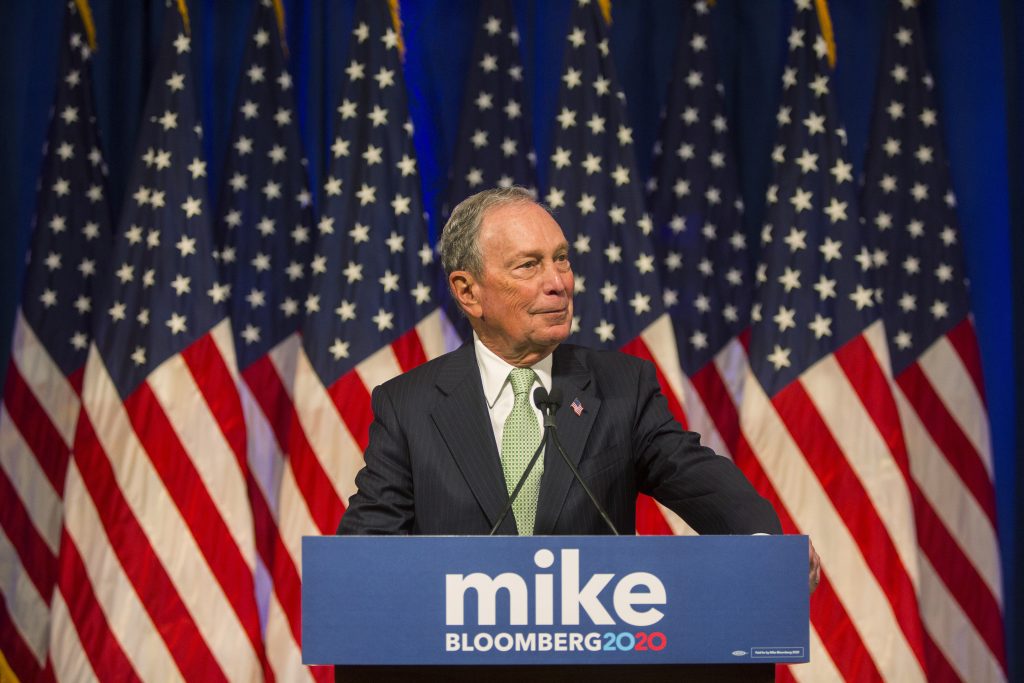 Mike Bloomberg would sell the financial data and media company he created in the 1980s — which bears his name and made him a multibillionaire — if he is elected U.S. president, a top adviser said Tuesday.

Bloomberg would put Bloomberg LP into a blind trust, and the trustee would then sell the company, adviser Tim O’Brien said. Proceeds from the sale would go to Bloomberg Philanthropies, the charitable giving arm that funds causes from climate change to public health and grants for American cities.

The only restriction Bloomberg would put on the sale is that it not be sold to a foreign buyer or a private equity company, O’Brien said. Bloomberg, a Democrat, is currently chief executive of the company.

“We want to be 180 degrees apart from Donald Trump around financial conflicts of interest,” O’Brien told The Associated Press. “We think it’s one of the biggest stains on the presidency, and Trump’s record is his refusal to disengage himself in his own financial interests. And we want to be very transparent and clean and clear with voters about where Mike is on these things.”

Indeed, as one of the world’s wealthiest people, Bloomberg would have an extraordinarily complicated financial picture to untangle if he wins the presidency. His commitment to selling the company stands in stark contrast to the Republican Trump, who refused to fully divest from his business, instead putting his assets in a trust controlled by his two adult sons and a senior company executive. He has continued to make money from his properties.

Bloomberg said in 2018, when he was considering a presidential run, that he would consider selling his business if elected. The company is not currently for sale. He retained ownership in the company when he served as New York City mayor from 2002 to 2013, but gave up his title of chief executive.

O’Brien’s comment comes amid increasing scrutiny of Bloomberg’s wealth and business holdings from his rivals for the Democratic presidential nomination. He’ll face them on the debate stage for the first time on Wednesday in Las Vegas.

If he won the White House, the exact timeline for a sale isn’t clear, O’Brien said. There’s also been no decision on what would happen to Bloomberg Philanthropies.

Walter Shaub, former director of the Office of Government Ethics, said such an action would need to follow complex rules and be approved by the ethics office. The administer of the blind trust would need to be an institution, not a person, and it’s not clear how a trustee would navigate confidentiality requirements when trying to sell off a private company, Shaub said. There are no comparable examples of any executive branch official putting a large private company into a blind trust and up for sale, he said.

He said it would be smart for every candidate to set up meetings with the office now to begin discussing potential conflicts of interest.

“Bottom line: It could be a costly mistake for any candidates to make firm commitments to establish qualified blind trusts without first having their attorneys meet with OGE’s Director and legal staff,” Shaub tweeted.

Bloomberg created his own company in 1981, after he was fired from the investment bank Salomon Brothers with a $10 million severance payment. His new venture created the Bloomberg Terminal, a dedicated computer with proprietary software that allowed Wall Street traders, buyers and sellers to see financial transaction data in real time. The terminal quickly became a must-have product around the financial world and has been used by entities including the World Bank and the Federal Reserve Bank.

Bloomberg then grew the business to include a financial news arm, which has morphed into a major news wire service. The outlet has faced criticism for allowing its reporters to cover the campaign but blocking them from reporting in-depth investigations into Bloomberg or his Democratic rivals. Newsroom leaders didn’t impose similar restrictions on reporting regarding Trump.

Bloomberg has also faced renewed scrutiny over lawsuits filed by women at his company alleging discrimination or hostile treatment. Bloomberg has said he won’t release women from any nondisclosure agreements they’ve signed with the company.

Bloomberg entered the presidential race in November and has been steadily climbing in national polls, buoyed by $400 million in advertising. Worth an estimated $60 billion, he is entirely self-funding his campaign.