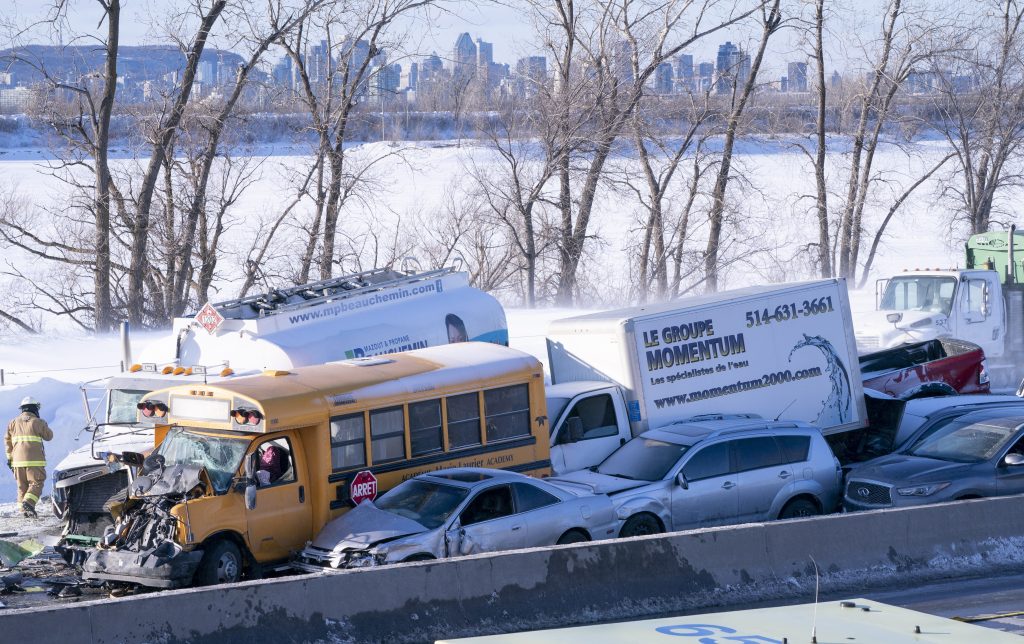 There were no immediate reports of deaths, but Quebec provincial police said about a dozen people were sent to the hospital with minor to serious injuries after the midday crash in in La Prairie, Quebec.

Firefighters from La Prairie said two people were still trapped Wednesday afternoon and authorities were trying to stabilize a diesel spill before extracting them from the wreckage.

Those two people are considered to be in serious condition.

The crash occurred around 12:30 p.m. on a stretch of Highway 15 that runs along the St. Lawrence River. The pileup of vehicles stretched for about a kilometer.

“People were driving, there were strong winds … and, suddenly, you couldn’t see anything,” Bonnardel said. “And then, well, the pileup started.”

Two snow removal operations took place in the area in the hour before the incident, he noted.

Bonnardel said the highway isn’t known for particular safety issues and 65,000 vehicles use the southbound part of it on a daily basis.

The transport minister said he’ll await the results of an investigation before deciding if any particular measures need to be taken.

Police spokesman Sgt. Stephane Tremblay said about 50 vehicles were able to drive away from the collision, but 75 others would need to be towed. Numerous vehicles were mangled, including several large trucks.

About 150 people were taken by bus to a nearby community center for treatment and to be picked up.

A school bus was also involved in the pileup, but none of the high school students on board were injured, said Andree Laforest, the province’s acting public security minister.