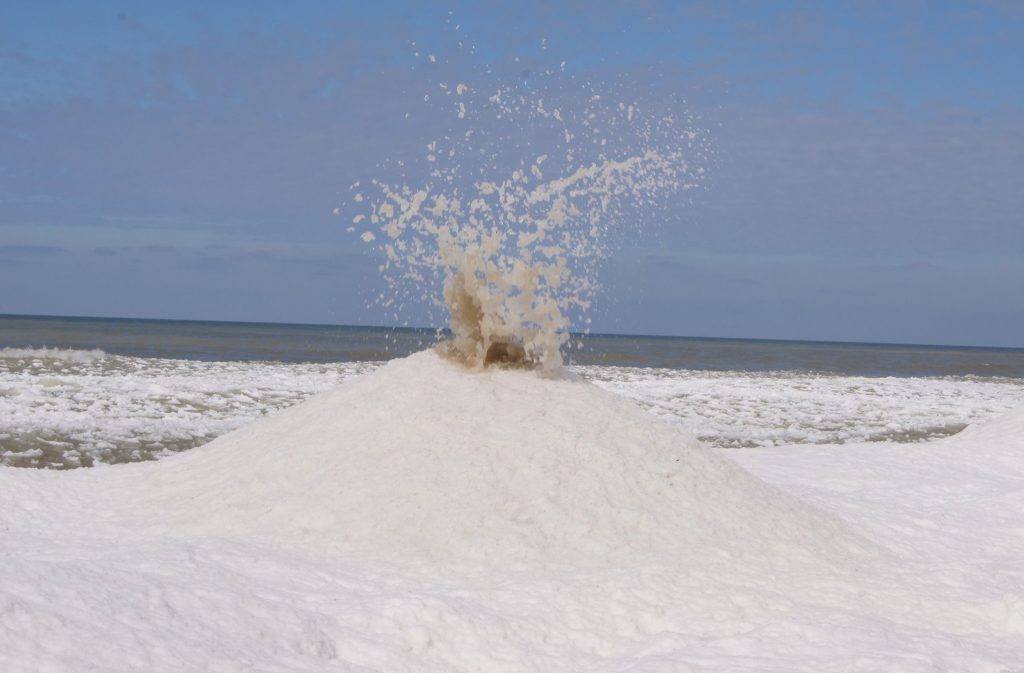 An ice volcano is a cone-shaped mound of ice formed over a terrestrial lake by the eruption of water and slush through an ice shelf.

“Ice volcanoes occur in locations in which waves hit accumulated ice on the shoreline with some force,” said Cort Spholten, a meteorologist with the National Weather Service of Grand Rapids.

“We were cold enough to form ice on the shore of Lake Michigan and water had broken the surface of that ice,” Spholten said. “The waves … were strong enough so the water channels through, it squeezes water upwards and tosses the floating ice up. As it happens, over the course of hours or days, it forms a cone and it resembles a volcano.”

According to Spholten, there have to be very specific conditions for the ice volcanoes to form.

“It needs to stay cold enough to keep the ice around and waves need to be large enough to force water upwards against the ice shelf,” he said.

How long will it last?

“Today, winds from the southeast should diminish the waves. It’s unlikely ice volcanoes will be seen today compared to yesterday, but it’s not impossible,” Spholten said.

However, ice volcanoes can also be dangerous especially when people climb on them. There may be no way to get out of the icy water if someone slips down the side of one of the mounds.

The ice volcanoes formed after another rare phenomenon on Lake Michigan.

On Friday, thousands of ice balls rolled up onto the lake shore. According to experts the weather conditions have to be just right: the temperatures are just below freezing along shallow beaches. Slush collects into round shapes and the waves sculpt ice chunks into orbs.