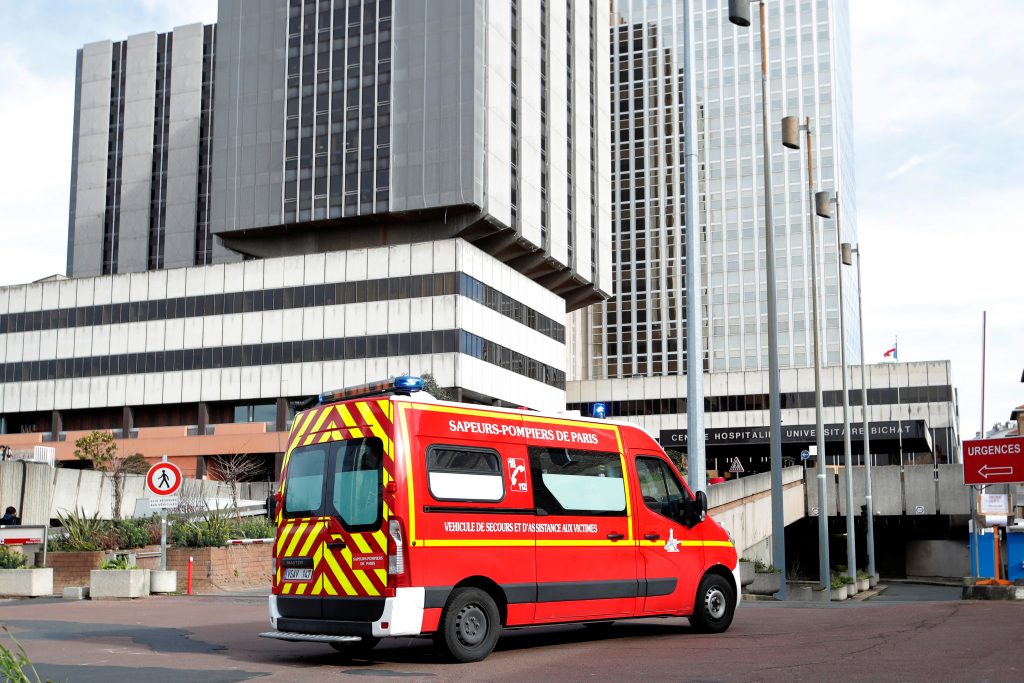 France on Saturday reported the first death outside Asia of a person infected with the new virus from China, an 80-year-old Chinese tourist who two French hospitals initially turned away when he first fell ill, French authorities said.

Health Minister Agnes Buzyn said she learned Friday night about the death of the patient, a man who tested positive for the virus in late January and had been in intensive care at a Paris hospital equipped with isolation rooms.

The patient from China’s Hubei Province had a serious lung infection, and French health officials had said they were concerned about his condition. All the previous deaths outside mainland China due to COVID-19, the disease the virus causes, were in Asia: one each in Japan, the Philippines and Hong Kong.

There were contradictory reports about the timing of the tourist’s illness. Buzyn said he arrived in France on Jan. 16 and was hospitalized on Jan. 25 under strict isolation measures but that man’s condition deteriorated rapidly.

Other French medical officials had said previously that the patient arrived in France on Jan. 23 and quickly fell ill.

Dr. Yazdan Yazdanpanah, head of Bichat’s infectious diseases unit, said the man visited two French hospitals. Because he “didn’t fulfill the definition” of someone considered at risk of infection with the virus, the hospitals decided it was unnecessary to test him, Yazdanpanah said.

The man did not live in Wuhan, the central Chinese city hardest-hit by the virus, but was from the province that includes Wuhan. He later tested positive and was put in isolation at Bichat Hospital on Jan. 28, Yazdanpanah said.

The man’s daughter also tested positive for the virus and admitted to Bichat Hospital for treatment, but is doing well and should be able to leave soon, the French health minister said.

As of Saturday, four of France’s 11 confirmed virus cases were in people since declared “cured” and released from the hospital, including a French doctor who was allowed to go home Friday, Buzyn said. Six others remained hospitalized.

Buzyn said she had no news about a French person who was among the 285 people from a cruise ship near Tokyo who tested positive for the virus and was hospitalized in Japan. Three other French people are on the ship, which is in quarantine in Yokohama.

Germany’s dpa news agency reported Saturday that two infected passengers on the quarantined Diamond Princess are German citizens, according to the German Embassy in Tokyo.

Nine European countries collectively have 46 cases of the virus that first emerged in central China in December, with Germany having the most at 16.

The virus has infected more than 67,000 people globally and has killed at least 1,526 patients, the vast majority in China. The World Health Organization has called the virus a threat to global health.

Chinese authorities have placed some 60 million people under a strict lockdown, built emergency hospitals and instituted controls across the country to fight the spread of the virus. Restaurants and other businesses have been closed nationwide and events have been canceled to prevent crowds from gathering.

In Munich on Saturday, Chinese Foreign Minister Wang Yi told a gathering of the world’s top defense officials and diplomats that his country was “determined to fight and win this battle” against the virus, and suggested that its efforts were paying off.

“Dawn is breaking and we are seeing light coming through,” Wang said through a translator.

He said the epidemic has presented a “severe challenge” to China’s economy growth but said it was well positioned to rebound.

“The fundamentals sustaining strong economic growth have not changed, and will not change,” he said. “After the storm comes the rainbow, and we are confident that China will emerge stronger from the epidemic.”

Italian Foreign Minister Luigi Di Maio said all Italians who sought repatriation from Wuhan due to the coronavirus have returned to Italy. The last was a 17-year-old student who arrived on a military flight early Saturday after being twice refused passage due to a fever. The teen has tested negative for coronavirus, and will now spend two weeks in quarantine at a military facility near Rome.