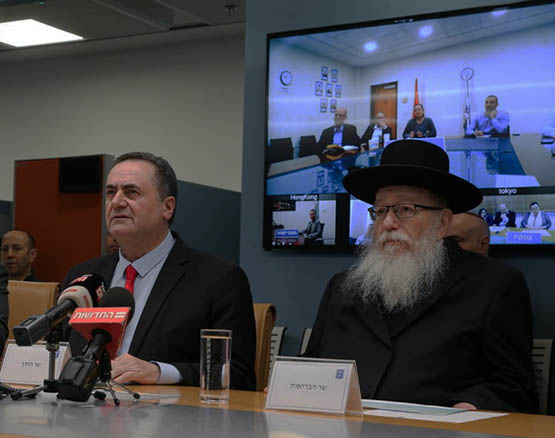 Hopes that Israelis stuck on the Diamond Princess would be home by the weekend were dashed Thursday morning, when a Japanese official told Army Radio that no one could leave the ship that remains anchored in Yokohama harbor with its full coterie of passengers, who cannot disembark because of fears they may be infected with the coronavirus.

Yu Osumi, Japan’s Deputy Ambassador in Israel, said that the group of 17 Israelis on the ship, along with the other 3,700-some passengers, needed to remain aboard until the end of the initial isolation period, which ends next Wednesday. “It’s for their safety and the safety of others,” Osumi said.

Hopes were raised Wednesday that the Israelis could be brought home and remain in isolation in Israel, after Foreign Minister Yisrael Katz contacted Japanese officials on the matter. Katz, along with Health Minister Rabbi Yaakov Litzman, spoke with the passengers Wednesday, telling them that they hoped to bring them home within days. Rabbi Litzman told the group that Israeli medical workers were prepared to help them in the event that they were indeed infected. The Israeli Embassy in Tokyo will ensure that they receive kosher food, medicine and packages from home, he added.

Rabbi Litzman announced after a meeting at the Foreign Ministry that Deputy Director-General of the Health Ministry Prof. Itamar Grotto will travel to Japan to help the Israelis who are aboard the ship more closely.

The health minister noted that “our goal is to provide assistance to Israelis on board the ship, and to work out their return to Israel in a safe manner for them and the country.”

The minister added, “We are following the World Health Organization’s guidelines to take care of them and also prevent infection after their arrival.”

Prof. Itamar Grotto said, “We consider it important to provide professional assistance to ensure the health of the Israelis on board and return them safely to Israel, and at the same time to prevent the risk of infection to the population of Israel.”

In a letter to Israeli officials Wednesday, family members of the Israelis stranded on the ship demanded that their loved ones be brought home as soon as possible. “Our parents are not criminals,” the group wrote in a letter sent to various government offices, including the Foreign and Health Ministries, as well as the Prime Minister’s Office, demanding that the state act to get their loved ones off the ship.

“Japan is conducting the biggest isolation experiment in history,” the family members wrote. “We are not prepared to allow our parents and grandparents to be a part of this experiment. Israel cannot allow Japan to do whatever it wants with its citizens. Our parents are not criminals, their only ‘crime’ was to take a vacation. The conditions on the ship have deteriorated to the point where healthy people are now also at risk. We demand that a safe area be set up here in Israel, with proper engineering and medical infrastructure, and to allow our family members to remain in isolation there.”