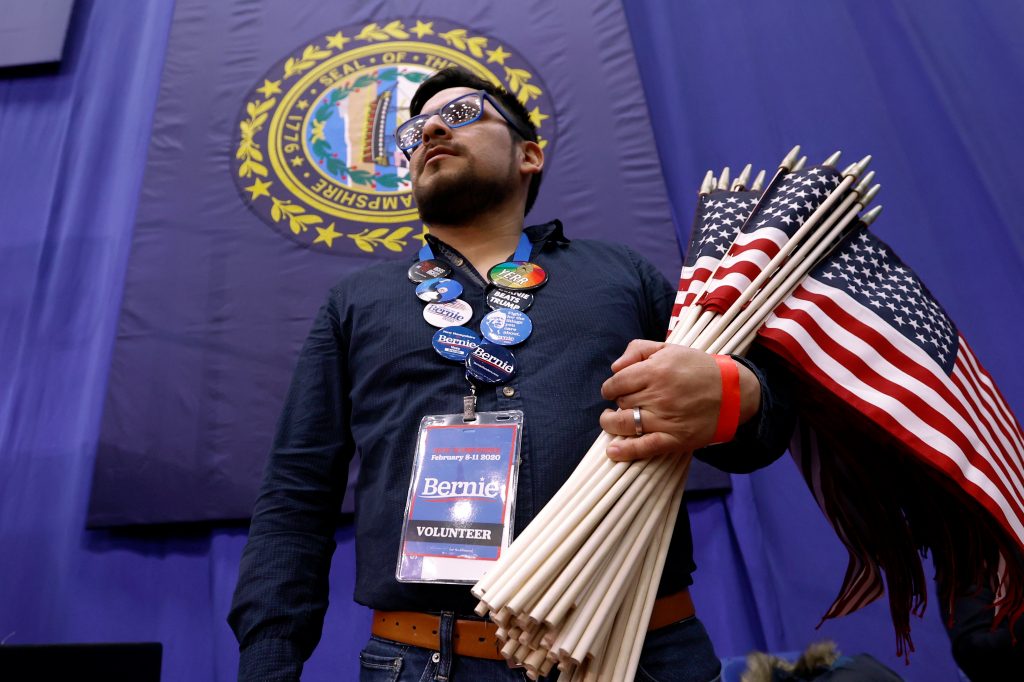 If there’s one thing Tuesday’s New Hampshire primary made clear, it’s that Democrats are no closer to agreeing on the right candidate to beat Republican President Donald Trump in November.

No candidate exceeded 30% of the vote – a muddled outcome that could end up helping billionaire Michael Bloomberg, a moderate candidate who wasn’t even on the ballot.

Here’s how the path ahead looks for each of the top candidates vying to challenge Trump on Nov. 3:

After his strong performances in mainly white Iowa and New Hampshire, Sanders‘s claim that he is building a “multiracial, multigenerational, people-driven movement” will be put to the test in more diverse Nevada and South Carolina.

A Quinnipiac national poll released on Monday showed the Vermont senator up 2 percentage points among black voters since January, reaching 19% support and closing the gap on Biden, who fell 22 points to 27% after a fourth-place finish in Iowa. Bloomberg surged to 22% among black voters in the poll.

The 78-year-old candidate’s hefty war chest is allowing him to air new media ads in states that vote in March, places where Bloomberg has dominated the airwaves as part of his strategy focused on later-voting states. Warren’s poor showing on Tuesday should help Sanders consolidate the party’s liberal wing.

In a sign of the resistance he may face, Nevada’s influential Culinary Union Local 226 on Tuesday circulated a flyer to its members warning that Sanders would “end” the labor group’s popular healthcare offerings if elected president.

The 38-year-old former mayor’s campaign is on an upswing after a narrow win in Iowa and a close second-place finish in New Hampshire, but far tougher tests lay ahead in states with more diverse populations.

Buttigieg has struggled to overcome skepticism among African-American voters, after members of the black community in South Bend complained he ignored them amid the city’s economic revitalization. That apparent weakness has raised concerns about whether he can mobilize enough support nationally from black voters to beat the Republican Trump.

The campaign says a strategy of reaching out to rural, independent areas where people voted for both Trump and former President Barack Obama has allowed Buttigieg to build a broad coalition and prove his unity message during a divisive Trump presidency is viable.

In South Carolina, where roughly 30% of the population is black, Buttigieg has remained in the single digits in opinion polls. His campaign is hoping to leverage his status as a military veteran to earn support in the state, which has a large number of veteran and active duty service members.

Campaign officials say his team will rely on deep volunteer corps in a broad swath of states with upcoming primaries, as opposed to hiring expensive staff, and focus spending on ads that will help boost his name recognition.

Klobuchar was mostly an afterthought in a crowded field only weeks ago, but she scored the biggest surprise in New Hampshire, coming in third and easily beating Warren and Biden.

A commanding debate performance in New Hampshire on Friday night led to increasingly large and enthusiastic crowds at the weekend. The campaign reported raising $4 million between the debate and Tuesday morning, and later in the day announced a new broadcast media advertising buy in Nevada.

Klobuchar, 59, has run as an unapologetic centrist, highlighting her success in winning in conservative districts in Minnesota and dismissing ambitious liberal policy proposals like free college tuition as unrealistic “bumper sticker slogans.”

Biden’s poor showings in the first two states could open the door for her to emerge as the moderate standard-bearer. But she needs to show she can move ahead of Buttigieg, and her support among black voters is even more anemic than his is.

After a disappointing fourth-place showing in her neighboring state, the Massachusetts senator needs a breakout moment to recapture the momentum she had last fall.

Hours before the polls closed on Tuesday, Warren campaign manager Roger Lau attempted to forestall a rush to judgment. He argued in a memo to backers that she had built an operation that could methodically collect delegates through March and warning against focusing on “winner-take-all victories.”

Warren failed to win a single delegate in New Hampshire, however, and Klobuchar’s rise appears to be cutting deeply into her base of college-educated voters, particularly women, according to exit polling by Edison Research.

Warren, 70, likely has the most extensive national operation aside from Bloomberg, with more than 1,000 staffers in 30 states. If her fundraising falters, she could face financial strains.

Biden’s decision to leave New Hampshire for South Carolina before the vote count started rolling in says it all.

His campaign never expected to win in Iowa and New Hampshire. But it also did not expect him to finish so poorly, casting a deep shadow on his claim that he is the most “electable” Democrat and best positioned to take on Trump.

His biggest problem has been the rise of Buttigieg and Klobuchar as younger, moderate alternatives.

Biden, 77, hopes the shift to Nevada and South Carolina will give him the reset he needs.

But there are other concerns. His weakness in the first two contests could trigger an erosion of support among his strongest political base: African-American voters. Biden also is unlikely to be able to compete financially with the likes of Sanders, Buttigieg and Bloomberg.

Bloomberg could emerge as one of the night’s biggest winners even though he didn’t campaign in New Hampshire.

The former New York City mayor has been counting on an unsettled race among the moderate candidates, including a weak showing from once-time front-runner Biden, to present himself as the most viable alternative to Sanders.

Bloomberg, 77, joined the race late and is not competing in the first four nomination contests. Instead, his campaign has poured hundreds of millions into the states that vote on March 3, known as Super Tuesday.

National polls have shown Bloomberg steadily growing his share of support in recent weeks, and he has built by far the biggest staff among presidential candidates.

But Bloomberg also faces his own challenges, including an increasing level of scrutiny on his record as mayor. On Tuesday, a recording surfaced of him defending policing tactics that have disproportionately ensnared blacks and Hispanics.