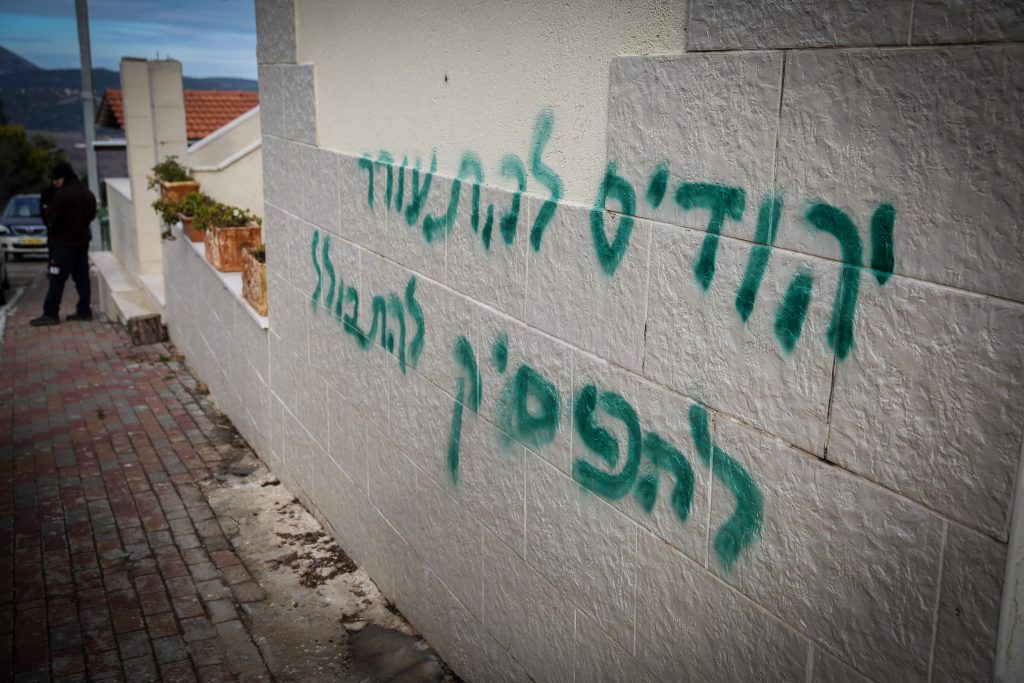 Police spokesman Micky Rosenfeld said the suspects fled the area and police units had opened an investigation and collected evidence from the scene. The slogans in the village of Jish read: “Jews wake up, stop the assimilation.”

Police said the incident was being treated as a suspected hate crime.

Prime Minister Binyamin Netanyahu condemned the attack, saying, “We will not accept any attacks on our citizens,” and vowed to “find the offenders and deal with them to the fullest extent of the law.”

It appeared to be the latest case of the so-called “price tag” attacks that Israeli extremists have been known to carry out against Arabs in recent years. Most have been directed at Palestinians in response to terror attacks or perceived efforts by Israeli authorities to limit Jewish construction in Yehuda and Shomron.

It was unclear what motivated Tuesday’s incident.

The town’s mayor, Elias Elias, said it was the third time Jish had been targeted in such an attack in recent years, with the last suspected hate crime taking place in April 2019.

“Apparently, some people want to sabotage our good relationship with our neighbors. He will not succeed, but this does cause us deep pain and heartache,” Elias told the Walla news site. “I call on security forces to catch these hooligans already.”

Security camera footage published by the Kan public broadcaster showed three suspects in hooded sweatshirts slashing tires of the cars, one after another.

Blue and White chairman Benny Gantz condemned the incident as “shocking and racist” and said in a statement that he “trusted law enforcement to bring the perpetrators to justice.”

In the Migdal Oz plantations. Tzvika Klein, whose cherry orchard was hit, told Arutz Sheva that local Muslims were responsible. “Jews don’t come there and our neighbors are Arabs,” he said.

“We’re there every day. Because of the bad weather we didn’t get there for two days. When we arrived this morning we saw the damage: About 30 young cherry trees uprooted and a computer panel with a solar cell that charges the irrigation center batteries was stolen. In the process, they also damaged electrical wires and broke a cabinet.”