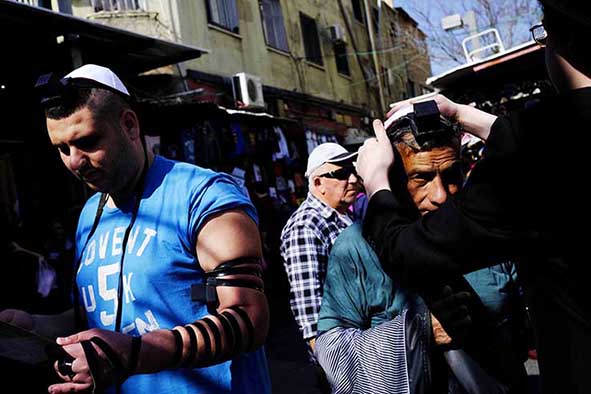 With the announcement Tuesday by the Tel Aviv Municipality that it was banning tefillin stands near schools in the city, calls came in for Education Minister Rafi Peretz to act. United Torah Judaism’s outreach committee to the Religious Zionist community said in a statement that all observant Jews – as well as the Yemina Party, which represents the community – must fight the ban.

“Tel Aviv is increasingly turning into an ‘external territory’ of the State of Israel,” the statement said. “Public transportation is operating on Shabbos without hindrance, with Transportation Minister Betzalel Smotrich unwilling to sign measures that will stop it. And now the municipality has decided to make war against the locating of tefillin stands outside schools. Education Minister Rabbi Rafi Peretz must intervene immediately to cancel this dangerous decision, and to tell Mayor Ron Huldai that the deterioration of religion in Tel Aviv stops here.”

The effort to ban tefillin stands from Tel Aviv’s streets is being led by the Green Secular Party, a member of Huldai’s coalition. The new rules require tefillin stands to be placed at least 100 meters away from schools, parks, community centers, or any other institution that serves children.

Deputy Mayor Reuven Ladianski, who heads the faction, said Tuesday that “the city has been getting many complaints about tefillin stands set up next to schools, sometimes right at the entrance. As a parent, I do not want organizations to recruit my children to various causes when they are in the public space, certainly not near where they go to school. We must protect our children, both at school and at parks, from all peddlers of ideology or propaganda. We must prevent exposing our children to these things while they are at school or on the way there.”

The Yemina Party also called for action. “Shame on the Tel Aviv municipality for doing this, as if children need to be ‘protected’ from tefillin. This disrespectful attitude to anything holy in Judaism further removes Tel Aviv from the consensus of Israelis, who are connected to and respect their Jewish identity. Yemina will continue to strengthen the Jewish identity of Israelis,” the party said in a statement.