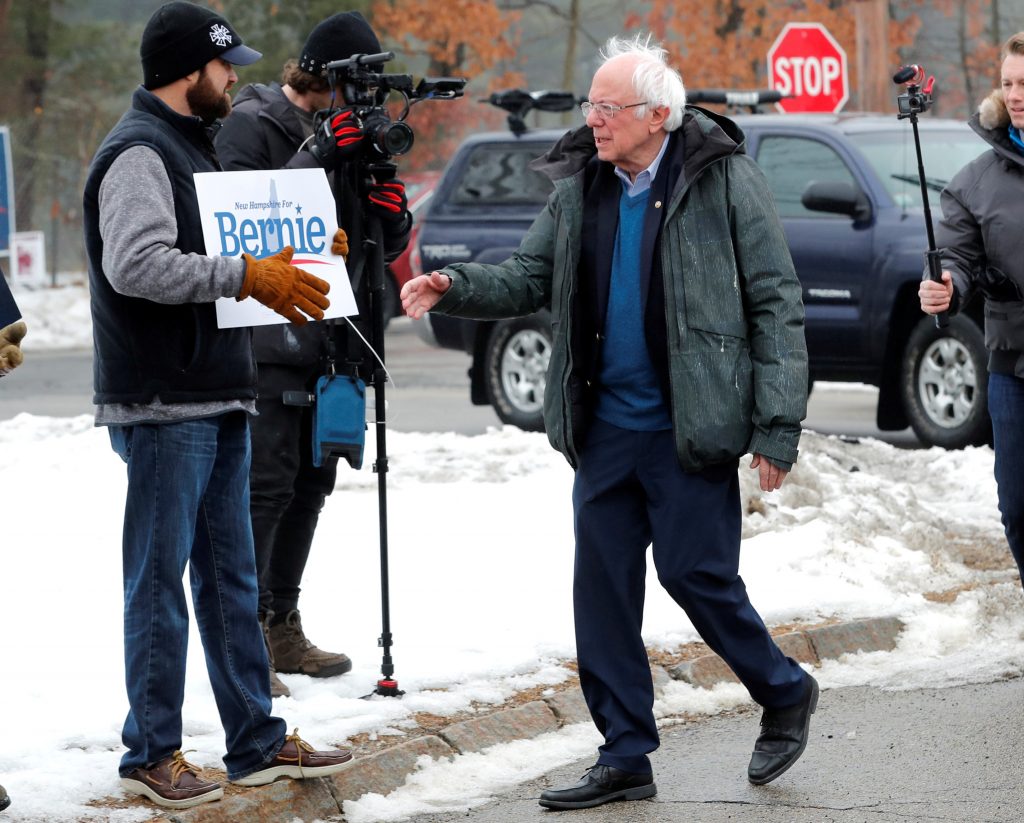 With 45% of precincts reporting, Sanders had 28%, while Pete Buttigieg, the moderate former mayor of South Bend, Indiana, was at 24%. Senator Amy Klobuchar, looking for a breakthrough after a strong debate performance on Friday, was in third with 20%.

Biden, the former vice president, was a distant fifth in the early results with 8.6%, behind Senator Elizabeth Warren with 9.5%. Biden, sensing the disappointing result, left New Hampshire for South Carolina before the results started rolling in.

The results began to thin the field of Democrats seeking the right to challenge Trump in the Nov. 3 election, with businessman Andrew Yang and Senator Michael Bennet dropping out after the polls closed and it became clear they would finish well out of the running.

Results rolled in relatively quickly, and Democrats in New Hampshire were confident they would have smoother sailing than in Iowa, where embarrassing technical problems delayed vote-counting and the results for days. Buttigieg narrowly beat Sanders in Iowa, but both campaigns have asked for a partial recanvass of results.

On the Republican side, Trump was projected to win the state’s presidential primary, easily defeating rival William Weld, the former governor of neighboring Massachusetts, according to early exit polling compiled by Edison Research.

Democratic voters in New Hampshire chose a candidate from a ballot with 33 names, including candidates who dropped out weeks ago. But it did not include former New York Mayor Michael Bloomberg, a billionaire who is not competing in any states before the 14 Super Tuesday primaries on March 3.

Sanders had taken a lead in recent opinion polls in New Hampshire despite a barrage of criticism from rivals who warned his far-left views would lead the party to defeat against Trump.

Sanders, 78, who represents neighboring Vermont in the Senate, won New Hampshire easily over rival Hillary Clinton with 60% of the vote in his unsuccessful bid for the party’s nomination four years ago.

Buttigieg also has gotten a bump in polls after his narrow disputed win in Iowa. Supporters of Buttigieg greeted him at a Manchester polling place before dawn, waving blue and yellow “Pete 2020” campaign signs and chanting “President Pete.”

Democrats in New Hampshire and in the other states that will vote in the state-by-state battle for the Democratic nomination are trying to decide whether they want to pick a moderate like Buttigieg, Klobuchar, Bloomberg and Biden, or progressive leaders like Sanders and Warren, who represents neighboring Massachusetts.

Yang, 45, who was bidding to be the country’s first Asian-American president, had surprised many observers by qualifying for debates and remaining in the contest longer than some veteran politicians.

Bennet, 55, a moderate from Colorado who had stressed improving education for Americans, told supporters it was “fitting” to end his campaign in New Hampshire, where he had campaigned heavily.

After Iowa and New Hampshire, small and rural states with predominantly white populations, the race will move on to more diverse battlegrounds that pose new tests.

Biden in particular is banking on South Carolina, where he has enjoyed strong support among African-American voters. He served as vice president for eight years under Barack Obama, the first black U.S. president.

Support for Biden, who once led in national polls among Democrats, has tumbled since his poor performance in Iowa. He had said he might suffer another weak finish in New Hampshire.