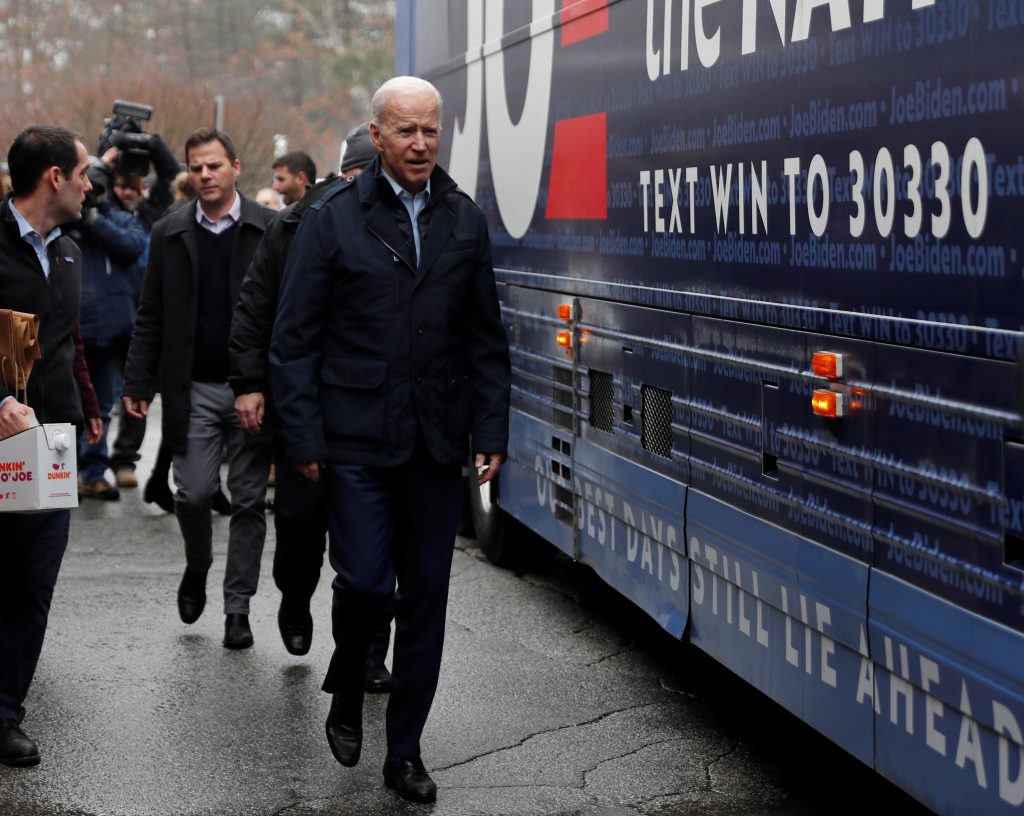 Democratic U.S. presidential hopeful Joe Biden told reporters in New Hampshire on Tuesday he was headed to South Carolina later in the day – before the results of the nominating primary vote underway in the New England state are even released.

His rivals continued to barnstorm schools, churches and doughnut shops in their last chance to persuade New Hampshire voters that they were the party’s best bet to take on President Donald Trump in the Nov. 3 election.

New Hampshire is the second contest of the U.S. presidential party nominating cycle. While few votes are on offer, it gives candidates a chance to build momentum for their campaigns.

Here are some scenes from the campaign trail on Tuesday:

‘HUNDREDS OF THOUSANDS OF DOORS’

Sanders thanked a handful of supporters at McDonough Elementary School in Manchester, which was hosting a polling place.

“Our people have knocked on hundreds of thousands of doors in the snow and the rain and the cold, and I think that’s why we have a chance to do really, really well here tonight,” Sanders told reporters.

The Sanders campaign said volunteers knocked on 250,000 doors on Saturday and Sunday, while U.S. Senator Elizabeth Warren’s campaign hit 163,000 from Saturday through Monday. Nearly 250,000 people cast ballots in the state’s 2016 Democratic primary, which Sanders won in his unsuccessful fight for the party’s nomination against Hillary Clinton.

Party officials have said they do not expect turnout on Tuesday to match the record set in 2008, the year of Barack Obama’s first presidential campaign.

Biden, who finished a disappointing fourth in last week’s Iowa caucus and is trailing in polls in New Hampshire, is moving on to what he hopes are more welcoming states. While visiting a Manchester donut shop, he told reporters that he will head to South Carolina later on Tuesday.

The abrupt move suggests Biden views his fortunes in New Hampshire poorly. His campaign was banking on strong support from black voters – who remember him fondly for his role in Obama’s historic presidency – in South Carolina, which votes on Feb. 29.

“We’re still mildly hopeful here,” Biden said. But he dismissed the idea that South Carolina has become a do-or-die state for his candidacy.

That meant he would be addressing his New Hampshire supporters – and the volunteers who made up his campaign organization – by video link rather than in person.

“The rest of the nation is out there,” Biden said. “There’s an awful lot of electoral votes to be had, and we’re going to see.”

Warren, a progressive who represents Massachusetts in the Senate, told reporters in Nashua what she thought of Biden’s early departure: “It says that he’s not here to fight for their votes in New Hampshire.”

Chris Herbert, 70, a New Hampshire state representative, said he voted for Sanders in the 2016 primary, but cast his vote for Warren on Tuesday.

“I think she might be more persuasive,” he said, citing her success in setting up the Consumer Finance Protection Bureau.

But Herbert said he would also be happy with Sanders as the nominee over more moderate candidates.

Warren started her day by visiting a polling location in Portsmouth, where she met a group of passionate supporters.

Warren handed out doughnuts to volunteers and took photos with voters, along with her husband Bruce Mann and dog Bailey.

‘THE ONE WHO CAN BEAT TRUMP’

The 38-year-old military veteran shook hands and took selfies with the enthusiastic crowd.

“It feels good out here,” he said, smiling as reporters asked how he thought he would fare in Tuesday’s primary.

Kathy Carswell, 60, said she picked Buttigieg for his youth and ability to bring people together.

Some of the older candidates were qualified but had less of a chance than Buttigieg against Trump, she said.

“I think (Buttigieg) can bring the country back together again, instead of separating it,” said Carswell, without referring to other candidates by name.

Rebecca Balzano, a 38-year-old restaurant cook, called Buttigieg “too new, too young” and said she voted for Sanders, a self-described democratic socialist.

Democratic voters in the state are faced with a lengthy ballot listing 33 names – including top-tier candidates, former hopefuls who have already dropped out of the race and some contenders who never attained a national profile.

One name not on the list is former New York City Mayor Michael Bloomberg, a late entrant to the race who is skipping the first four contests.

That did not stop voters in the mountain hamlet of Dixville Notch from picking the billionaire founder of the media company that bears his name as a write-in candidate when they voted just after midnight on Tuesday. He won three of the five ballots cast.