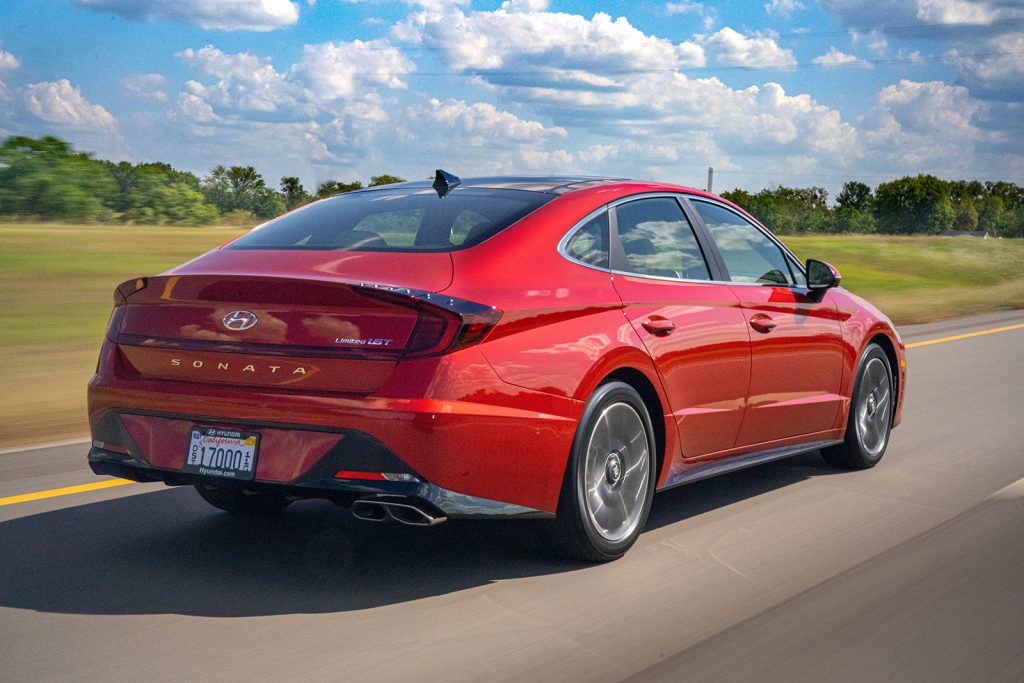 It’s remarkable how often the automotive industry forgets one essential truth in car design, best expressed by the late industrial designer Raymond Loewy: “Between two products equal in price, function and quality, the one with the most attractive exterior will win.”

And yet Hyundai, having fielded the sensuous and exciting sixth-generation Sonata in 2010, followed it with an incredibly bland follow-up in 2014, yielding to the South Korean market’s preference for conservative design, even as Honda, Nissan, Toyota and corporate cousin Kia dialed up their midsize sedan design mojo.

Well, it seems Hyundai has learned its lesson.

The redesigned 2020 Sonata is a stunning return to form, one whose beauty is more than skin deep. But first, let’s drink in this car’s exquisite design details.

Returning once more to the elegant coupe-like silhouette it helped popularize, the Sonata’s large maw and textured grille grabs your attention, bookended by strikingly detailed headlamps with light bands that extend back to frame the hood. And unlike its competitors, the Sonata’s hood reaches all of the way to the grille without any visual interruption from a front-end fascia, resulting in a far more upscale appearance than its competitors. The light band blends into a chrome trim piece that wraps around the side glass, as the shape ends in a uniquely chiseled back end, accented in a unique taillamp shape, one that’s repeated on the interior’s chrome trim. It’s a superlative styling job, one that excites without alienating, enraptures without provoking.

Inside, the Sonata exudes a vogueish design fluency that’s at once articulate and flawless, a combination of art and understanding that projects an elegant simplicity that feels far more premium than it is. Grab the well-padded door armrest and you’ll find it’s easy to grab at any point, not in just one spot, and it has storage. Fine, thin air-conditioning vents have an especially graceful look, and are nestled above two simple climate control knobs augmented by four toggle switches and five buttons.

The driver faces a 12.3-inch digital instrument cluster, aided by a head-up display. In the center of the instrument panel, a sleek 10.25-inch infotainment touchscreen, Apple Car Play, Android Auto, USB port and wireless charging. But the thoughtful design continues. Activate the turn signal, and a small camera mounted under one of the two side mirrors displays a picture of your car’s blind spot in the instrument cluster. It’s like Honda LaneWatch but with cameras on both sides of the car rather than just one. Other niceties include rear seats that are heated and cooled, a heated steering wheel and a panoramic sunroof.

That said, designers didn’t catch everything. While the armrests are well padded, the side of the center console, where long-legged drivers must rest their knees, is not. Is this an oversight or cost-cutting?

The Sonata’s design is mirrored in its driving demeanor. Handling is noticeably better, with quick responsive steering and minimal body roll that provides for assured driving. Power comes from one of two engines. Base SE and step-up SEL models get a 2.5-liter four-cylinder engine that generates 191 horsepower, 181 pound-feet of torque and is EPA-rated at 27 mpg city, 37 highway. SEL-Plus and Limited grades get a turbocharged 1.6-liter four-cylinder engine generating 180 horsepower, 195 pound-feet of torque and EPA-rated 27 city and 36 highway. Both engines mate to an eight-speed automatic transmission. Front-wheel drive is standard. All-wheel drive is not offered.

Notably, Hyundai didn’t have a 2.5-liter model available for testing, although the torque figures suggest that the turbo engine provides its power at lower RPMs, allowing for more power availability at lower speeds. While no sports sedan, the Sonata provides the responsively punchy attitude and willing power one expects while navigating suburbia’s pokey parkways and clogged arteries. The transmission is a willing partner most of the time, although shifting the drive mode selector to Normal from Sport revealed slower initial throttle response. Manually shifting the transmission proves surprisingly gratifying for a family hauler. And without trying, the Sonata easily returned 30 mpg, close to the EPA’s combined fuel economy rating of 31 mpg.

The power driver’s seat is comfortably supportive with strong side bolsters, but the SEL Plus test car’s front passengers’ seat was far less accommodating, as it lacked a tilt adjustment for seat bottom cushion. Nevertheless, the impressively roomy cabin is very quiet except on rough pavement, but even here, it’s better than average. Even the climate control was unobtrusive, with little or no fan noise. That makes it the perfect place to listen to the Bose audio system that replaced last year’s Infinity system. Still, sound quality was disappointing, with speakers that lacked punch, and exhibited a muffled quality.

But other features more than make up for it, such as the digital smart key, which allows you to use your Android smartphone to unlock and start the car. You can even summon the car, and it will start itself out of a tight parking space and roll up to you. It will even straighten the steering wheel before proceeding, if need be.

Throw in the boatload of standard driver assistance safety gear, and the Sonata makes a compelling case for being the best in its segment. It’s one sweet Sonata, something that surely wasn’t true last year. It brings to mind another famous Loewy quote, one that any designer or auto executive can understand: “The most beautiful curve is a rising sales graph.”