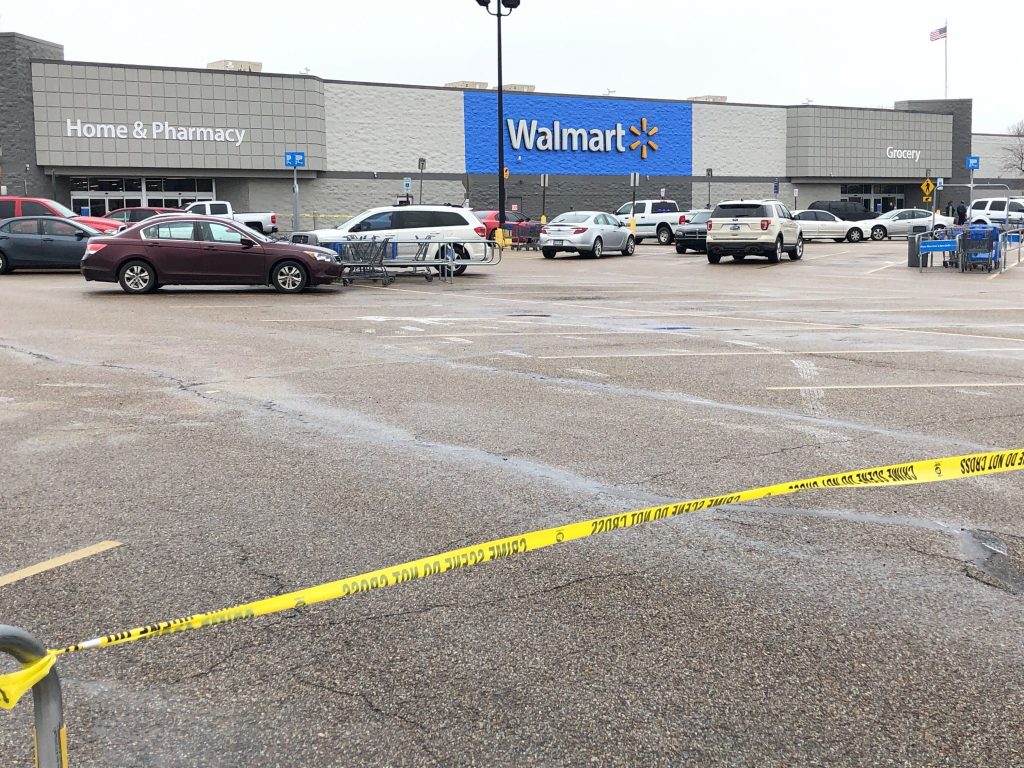 Two police officers were wounded and a gunman was killed Monday morning in an exchange of gunfire at a Walmart store in Forrest City in eastern Arkansas, authorities said.

Forrest City Police Chief Deon Lee said one of the officers was taken to a hospital about 45 miles to the east in Memphis where he was in surgery, and the initial prognosis is “he’s going to be OK.”

The officers responded to the Walmart after someone called police to report a man who was making threats and was “kind of talking out of his head,” Lee said at a news conference Monday afternoon. Arkansas State Police Spokesman Bill Sadler said local authorities have identified the suspect as Bobby Joe Gibbs, 40, of Forrest City, though the state crime lab has yet not confirmed his identity.

Lee identified the injured officers as Lt. Eric Varner and Detective Eugene Watlington. Both are assigned to the criminal investigation department and neither was wearing a bullet-resistant vest, Lee said.

The mayor heaped praise on the officers.

“Due to their heroism and quick response, no civilians were injured,” Forrest City Mayor Cedric Williams said.

Walmart spokesman Scott Pope said the company was helping with the police investigation but declined further comment. Walmart is based in Bentonville, Arkansas. The Arkansas State Police Criminal Investigation Division was investigating the shooting.

Tammy Priddy, 57, works at Simmons Eye Center in the Walmart. She said she was preparing patient records for the day when she heard eight shots. She said she hid under a counter in the lab until the gunshots stopped.

“The first two shots kind of startled me, and then a coworker came in and said it was gunfire,” Priddy said.

Police formed a perimeter with yellow crime scene tape around the Walmart parking lot after the shooting. Police cars with flashing lights blocked roads to the store. The store was closed and employees were sent home. A small strip mall and two gas stations saw no business Monday afternoon, as they were within the police perimeter.

Mary Martin, who said she was Gibbs’ aunt, went to the Walmart after she heard about the shooting. She said Gibbs didn’t have a job, but had previously worked as a DJ.

“He was a good person. He loved his family,” she said.

When asked about the description of Gibbs “talking out of his head” at the store, Martin responded, “That doesn’t sound like Bobby.”

The retailer came under criticism for having insufficient security at the El Paso store on that day and has since quietly expanded security at all its stores in the city to include an armed off-duty police officer and a security guard.

A spokeswoman for the company said in November that the hiring of off-duty officers in El Paso was not a blanket policy. It’s unclear what security measures were in place at the Forrest City store on Monday.