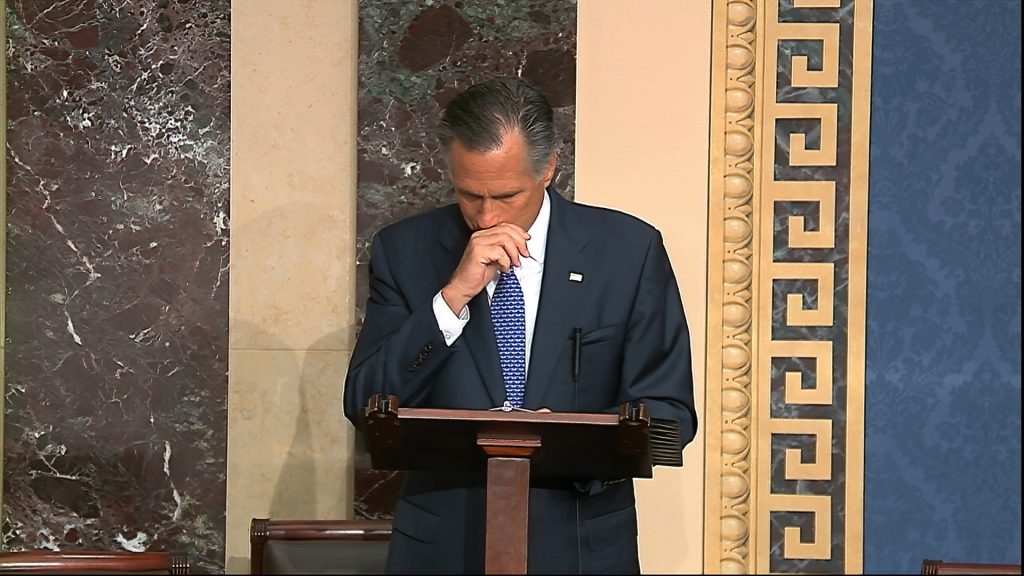 Even though Mitt Romney’s status as one of few Republicans willing to publicly criticize President Donald Trump is well known is his adopted home of Utah, his unequivocal speech before his impeachment vote of guilty on one count Wednesday caught many by surprise.

In a state where Republicans are unusually divided on the president, the reactions to Romney’s choice were also at odds. Some were heartened to see him cast what Romney described as an agonizing vote dictated by his conscience, though there was plenty of frustration and anger from Trump supporters.

Still, with four years to go before any re-election campaign, Romney has a long time to explain his status to an electorate with a deep well of goodwill that gives him a celebrity-like status in the state.

“There will be ramifications in terms of his support,” said Jason Perry with the University of Utah’s Hinckley Institute of Politics. But “people do ultimately care about what he says, even if they don’t agree with him.”

Romney appeared emotional during his speech on the Senate floor. He told reporters that he’d been waking up in the early-morning hours as his mind churned over what to do. He cited doing the right thing despite the consequences, and he said his vote will likely have blowback in the party for him and his family.

Though there’s no provision in Utah law to recall a sitting senator, one state lawmaker has recently introduced a bill that would create one. Republican sponsor Rep. Tim Quinn has said it is not aimed at Romney, and his bill would require a significant effort to put a recall proposal to voters. The bill hasn’t gotten a hearing yet, and if it passes it’s unclear whether it would be constitutional.

Romney’s key role in saving the troubled 2002 Olympics in Salt Lake City has made him well-known and liked in the state where he moved after his failed 2012 presidential run.

Many Utah voters share Romney’s wariness about Trump. A nationwide Associated Press survey of midterm voters in 2018 found that while two-thirds of church members voted Republican, just over half approved of Trump’s job performance. The VoteCast survey also found that 64% of Utah voters wanted to see the senator confront the president.

Shelly Cluff, a 33-year-old stay-at-home mother in suburban Riverton, is a Republican who’s never been a fan of Trump. She was pleasantly surprised at Romney’s stance.

“I was greatly impressed by his integrity, his willingness to put so much on the line in order not to violate his conscience, in order to stand with a clear conscience,” Cluff said.

Still, she knows that not all her neighbors feel the same, including several who didn’t vote for him in 2016 but have since come around.

“I’ve been taken aback by how many people have been really upset and disappointed in Mitt Romney,” she said.

Count among those voters like Ray Clark, a 71-year-old electrical contractor in rural Kanab. He said he’s “furious” about Romney’s vote, and chalks it up to the senator’s personal dislike of the president.

Still, he’s not sure if Romney will ultimately suffer any true political consequences in Utah.