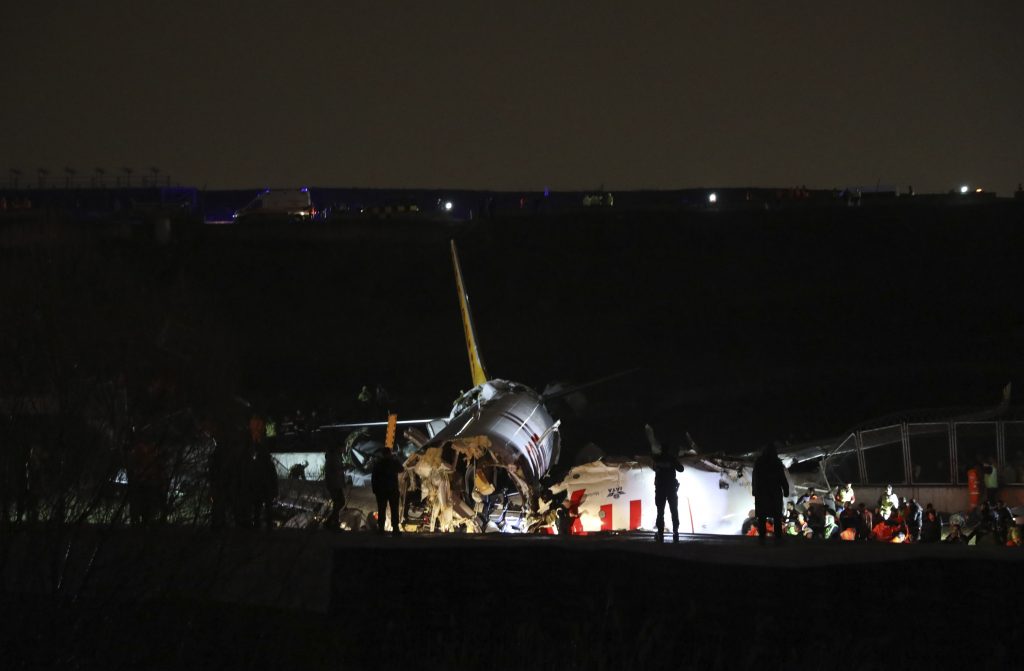 A plane skidded off the runway Wednesday as it tried to land in Istanbul, crashing into a field and breaking into pieces. Passengers had to evacuate through cracks in the smashed plane and authorities said at least 52 people were injured.

The low-cost Pegasus Airlines plane was arriving at Istanbul’s Sabiha Gokcen airport from the western Turkish city of Izmir when it crash-landed and broke into at least three pieces. The Transportation Ministry said there had been no deaths in what it called a “rough landing.”

In a video obtained by The Associated Press, the wreckage of the plane was in a field adjacent to the end of the runway. The video shows heavy rain and strong winds at the time, with smoke coming from one of the engines. Passengers were climbing out of the fuselage onto the wings of the plane and away from the crash site.

Dozens of rescue crew members swarmed around the flood-lit fuselage, including around the cockpit, which had flipped over. The plane was a Boeing 737 that was 11 years old, according to the flight tracking website Flightradar24.

Istanbul Gov. Ali Yerlikaya said at least 52 people were injured in the accident and had been hospitalized. His office said the plane was carrying 177 people, including six crew members.

NTV television said the injured included the plane’s two pilots, who it said were in serious condition.

The airport was shut down after the crash landing and flights were being diverted to Istanbul’s main airport.

“According to the information we have, there was a rough landing. The accident occurred after (the plane) could not decelerate and rammed into a field from the end of the runway,” state-run Anadolu Agency quoted Transportation and Infrastructure Minister Mehmet Cahit Turan as saying.

The accident comes a month after a Pegasus plane with 164 people on board skidded off the runway in Istanbul at the same airport. There were no deaths or injuries in that incident on Jan. 7.

In January 2018, another Boeing 737-800 in the Pegasus’ fleet slid off a runway at northeastern Turkey’s Trabzon Airport and down a dirt embankment. The plane came to rest in the dirt above the Black Sea with its nose pointed toward the water. None of the 168 passengers and crew members were injured.

In 2013, the tail of an Asiana Airlines Boeing 777 broke off after the jet hit a seawall during approach to San Francisco International Airport. Three people died, 49 were seriously injured and scores more suffered minor injuries, according to the U.S. accident report.

That same year, a Lion Air Boeing 737 split in two after landing in shallow water short of the runway in Bali, Indonesia. All 101 passengers and seven crew members survived.