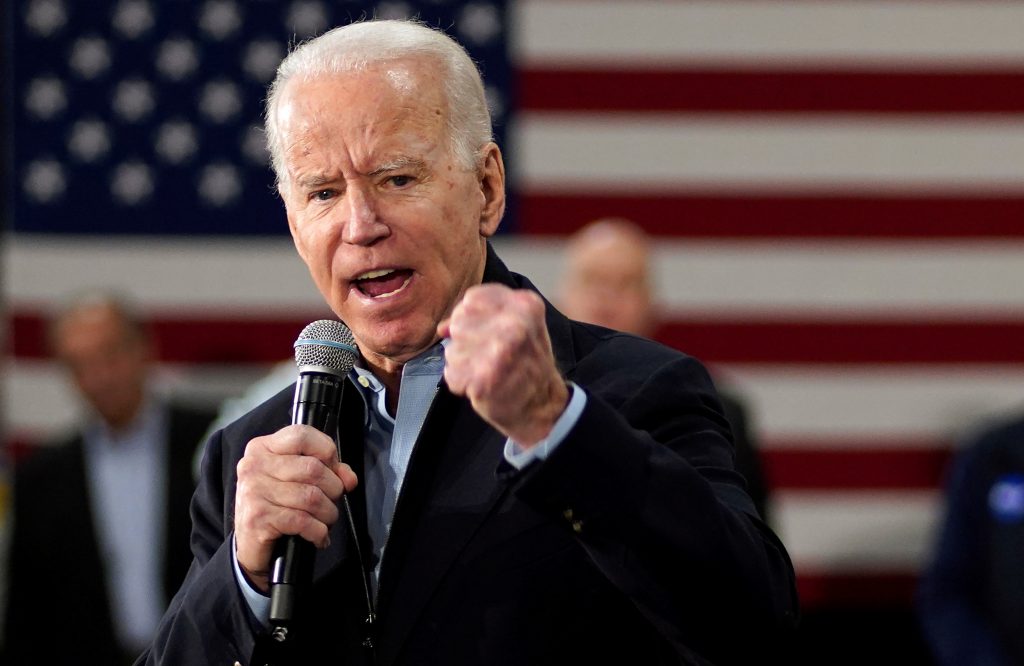 Former Vice President Joe Biden vowed on Wednesday to go on fighting for the Democratic presidential nomination despite what he called the “gut punch” he took in Iowa, where partial results show the political veteran lagging in fourth place.

“I am not going to sugarcoat it: We took a gut punch in Iowa. The whole process was a gut punch,” Biden said in Somersworth, New Hampshire, where he was campaigning. “This isn’t the first time in my life that I’ve been knocked down.”

With 86.1% of precincts reporting from Monday’s caucuses, Biden was behind Pete Buttigieg and U.S. senators Bernie Sanders and Elizabeth Warren in the first nominating contest of the 2020 campaign.

Biden, who bills himself as the most electable Democratic candidate to take on Republican President Donald Trump on Nov. 3, led many national polls in the run-up to Iowa and has a host of high-profile endorsements.

But his campaign is in trouble.

“There are an awful lot of folks out there who wrote off this campaign…They’ve been trying to do that from the moment I entered the race. Well, I’ve got news for them. I’m not going anywhere,” Biden said.

In an unusually direct address, Biden took aim at Sanders and at Buttigieg, the former mayor of South Bend, Indiana, as he tried to recover ahead of the New Hampshire state primary next Tuesday.

Biden, 77, said every Democrat running for the House of Representatives or Senate this year would have to carry the label “socialist” if Sanders became the Democratic nominee. An independent, Sanders calls himself a democratic socialist.

Buttigieg, 38, held a narrow lead over Sanders, 78, in the Iowa caucuses, according to partial results released on Wednesday. Problems with an app used for vote counting had delayed a final count. Warren, 70, placed third.

There was more confusion later in the day when the party released new figures showing the four top candidates on roughly the same percentages, but then tweeted that there would shortly be “a minor correction to the last batch of results,” without giving an explanation.

As of early Wednesday evening, the Iowa Democratic Party said 86.1% of precincts had reported their results, showing that Buttigieg, had 26.7% of state delegate equivalents, the data traditionally reported to determine the winner. Sanders had 25.4%, Warren was at 18.3%, and Biden garnered 15.9%.

Sanders was slightly ahead of Buttigieg in the Iowa popular vote, which is not used to determine the delegates who will formally choose the nominee at the Democratic National Convention in July.

After more than a year of campaigning and spending more than $800 million, the results in Iowa had been expected to provide some answers for Democrats desperately trying to figure out how to beat the businessman-turned-president.

But the delay has blunted the momentum of the state’s eventual winner. The partial results have been released in batches on Tuesday and Wednesday and the Iowa Democratic Party has not said when it will announce the rest.

Buttigieg has argued it is time for a new generation of leaders and that his lack of experience in Washington makes him an ideal candidate to break the partisan gridlock there.

But he might struggle to win in New Hampshire, where Sanders leads in many opinion polls, and in the next Democratic primary in South Carolina on Feb. 29 where Biden expects to receive strong backing from the African-American vote.

Biden accused Buttigieg, 38, of being insufficiently supportive of the achievements of the Obama administration and cast doubt on his experience.

“It’s a risk — to be just straight up with you — for this party to nominate someone who’s never held an office higher than mayor of a town of 100,000 people in Indiana,” said Biden, who was President Barack Obama’s vice president for eight years.

Jeannie Collins, 34, who works in human resources in Manchester, New Hampshire, said she was leaning toward voting for Sanders but agreed with Biden’s concern that the senator may be too left wing for many Americans.

That concern was more likely to make her vote for Buttigieg rather than Biden, she said.

“I just feel like it’s time for the younger generation. That’s why I really like Buttigieg,” she said. She described Sanders as “older but his views are younger.”

Two other Biden opponents — Warren and former New York City Mayor Michael Bloomberg — released ads on Wednesday highlighting their ties to Obama in a move to pick up Biden supporters who may be reconsidering after his poor performance in Iowa.

Warren’s advertisement about her creation of the Consumer Financial Protection Bureau during Obama’s administration uses narration from the former president praising Warren as being “very tough” and “one of the country’s fiercest advocates for the middle class.”

Bloomberg’s advertisement quotes Obama praising the former mayor’s work on gun control and education, saying he has shown “what can be achieved when we bring people together to seek pragmatic solutions.”