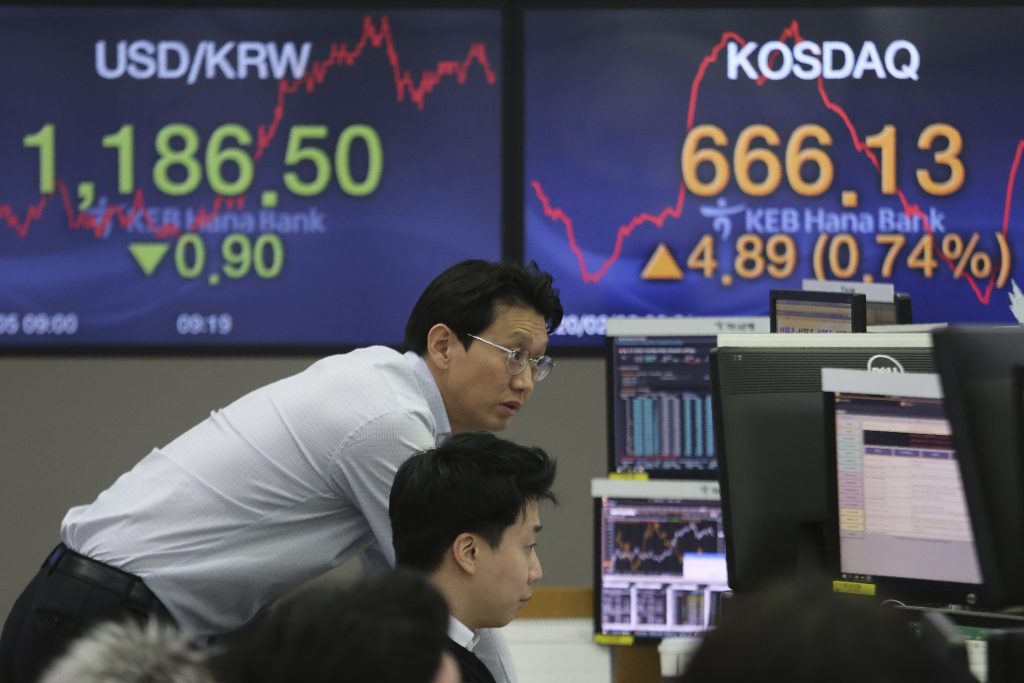 Asian shares rose Wednesday on optimism that China’s latest actions may help curtail some of the expected economic damage from the virus outbreak.

“Risk sentiment remains on the mend, setting Asia markets up for intraday gains. Although this remains the ebb and flow around an issue such as the coronavirus with the impact still under assessment,” said Jingyi Pang, market strategist at IG in Singapore.

The gains reflected a broad rally on Wall Street overnight that drove the Dow Jones Industrial Average more than 400 points higher and gave the S&P 500 its best day in more than five months.

The gains also pushed the tech-heavy Nasdaq to an all-time high and added to a solid start to February for the broader market after a downbeat January.

Investors welcomed a decision by China’s central bank to inject $57 billion into its markets. The move is the latest step by Beijing to soften the financial blow of the recent virus outbreak. Worries about the potential global economic impact of a protracted outbreak rattled markets in recent weeks, erasing the S&P 500’s gains last month.

“If China’s going to do what they can to support their markets, then maybe we don’t have as much cause for concern for our markets,” said Willie Delwiche, investment strategist at Baird.

Apple and Microsoft were among the tech-sector standouts. Like other major technology companies, they rely heavily on doing business with China. Health care, industrial and financial stocks also notched solid gains.

China’s latest measure to shore up its markets follows an announcement from Monday that the government would put $173 billion into its markets as they reopened from an extended break.

The world’s second-largest economy is in lockdown that is threatening economic growth there and globally. More companies, including Sony, are warning investors of a potential hit to revenue and profits because of the virus. More than 20,000 cases have been confirmed globally, along with over 400 deaths. The cases have been mostly in China.

The moves by China signal to investors around the globe that the country’s leadership is doing what it can to provide liquidity to their economy, Delwiche said.

“That limits some of the worst-case views that were out there from a financial perspective,” he said.

The bond market was also signaling more confidence among investors Tuesday. The yield on the 10-year Treasury jumped to 1.60% from 1.52% late Monday. Perhaps more importantly, the 10-year yield also jumped above the three-month Treasury yield of 1.56%.

The leapfrog move silenced a recession warning that had been ringing in the bond market, at least for now. Yields for short-term Treasurys are rarely higher than for longer-term Treasurys, and when it does happen, a rule of thumb says a recession may be on the way in about a year or so. This recession warning signal, which has a fairly accurate but not perfect history, had begun flashing in recent days on worries about the virus for the first time since October.

Rising expectations of further rate cuts by the Federal Reserve may have also helped lift stocks. Investors now foresee an overwhelming likelihood of at least one Fed rate cut this year, with nearly half expecting two cuts, according to data from CME Group.

The Fed has recently indicated that it’s comfortable with rates at their current level. But traders seem to expect that economic anxiety and damage resulting from China’s viral outbreak will lead the Fed to further ease borrowing rates.

Traders also continued to drive up shares in Tesla, pushing the stock 13.7% higher, following a 19.9% surge on Monday. The electric vehicle maker reported strong fourth-quarter sales last week and its second-straight quarterly profit. The stock is now up more than twofold since the start of the year.

Shares in eBay jumped 8.8% after The Wall Street Journal reported that the owner of the New York Stock Exchange has offered to buy the online marketplace for more than $30 billion, citing unnamed people familiar with the matter. The owner of the NYSE, Intercontinental Exchange, slumped 7.4%.