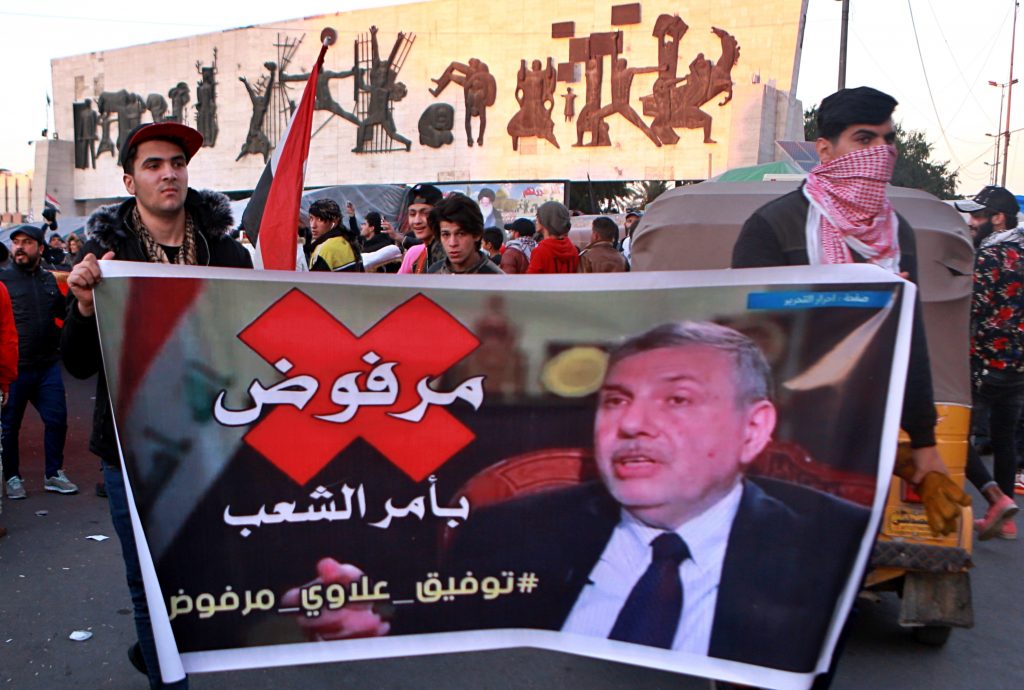 The top U.S. commander for the Middle East slipped quietly into Iraq Tuesday, as the Trump administration works to salvage relations with Iraqi leaders and shut down the government’s push for an American troop withdrawal.

McKenzie met with Iraq leaders in Baghdad and then went to see American troops at the al-Asad airbase, which was bombed by Iran last month in retaliation for the drone attack. Later, he said he was “heartened” by the meetings, adding, “I think we’re going to be able to find a way forward.”

His visit comes amid heightened anti-American sentiment that has fueled violent protests, rocket attacks on the embassy and a vote by the Iraqi parliament pushing for withdrawal of U.S. troops from the country. And it raises questions about whether the appearance of a high-profile U.S. military commander could spur compromise, or simply inflame tensions and scuttle ongoing negotiations to put Patriot missile batteries in Iraq to better protect coalition forces.

Two reporters traveling with McKenzie for the past two weeks around the Middle East did not go with him into Iraq because they didn’t have the required visas. Speaking to The Associated Press and Washington Post reporters after he returned, McKenzie said it’s difficult to predict how the discussions will turn out, particularly because the government is in transition.

While he met with outgoing Prime Minister Adel Abdul-Mahdi, President Barham Saleh, and Speaker of the House Salim al-Jabouri, he did not see the Prime Minister-designate Mohammed Allawi.

He said the U.S.-led coalition in Iraq believes that future military presence in the country must be based on the threat from Islamic State terrorists, in consultation with the Iraqi government.

Right now, he acknowledged that due to the current strain in relations, joint military operations and training between the U.S. and the Iraqis have been scaled back. He said there is “some training” and that U.S. special operations forces are doing missions with Iraqi commandos. But, he said, “we’re still in a period of turbulence. We’ve got a ways to go. ”

Top U.S. leaders have so far flatly dismissed Iraqi demands for U.S. troops to leave, adopting what appears to be a wait-and-see attitude with the hope that the problems will pass.

Iraqis, however, were furious over the drone strike at Baghdad’s international airport on Jan. 3 that targeted and killed Qassem Suleimani, Iran’s most powerful general, but also struck down an Iraq general who was with him. The Iraqi, Abu Mahdi al-Muhandis, was the deputy commander of Iran-backed militias known as the Popular Mobilization Forces.

In response to what Iraqi leaders called a breach of sovereignty, Parliament passed a non-binding resolution urging U.S. troop withdrawal. The United States has more than 6,000 troops in Iraq.

But after Iran struck back on Jan. 8, launching ballistic missiles at two Iraqi bases where American troops were stationed, the U.S. doubled down and asked to bring the Patriot systems into the country.

There were no Patriots or other air defenses in Iraq capable of shooting down ballistic missiles at the time of the Iranian strike. No forces were killed, but at least 64 people have been diagnosed with traumatic brain injury.

Thus far, the Iraqis have not approved the request. McKenzie said he discussed the issue during his meetings, but he declined to provide any details.

He said, however, that he believes the threat from Iran and its proxy forces in Iraq, Syria and other areas continues and that “it is a really dangerous time.” The Pentagon also believes that continued training and operations are critical to prevent the resurgence of the Islamic State terrorist group.

During a two-hour stop at al-Asad, he said he talked with troops who went through the missile attack, and due to warning systems were able to take cover. He said they told him they couldn’t hear the missiles coming but some on the fringes of the site, “could see warheads falling from the sky in the last five or six seconds.”

Asked why he went into Iraq at such a sensitive time, he said that as the top Middle East commander, “I have a moral obligation to go there.”

He added, “It’s important to go and see the Iraqi government, to show them we’re with them and that this is an important relationship.”