Two Bachurim Mugged in Crown Heights, Arrest Made Thanks to Shomrim 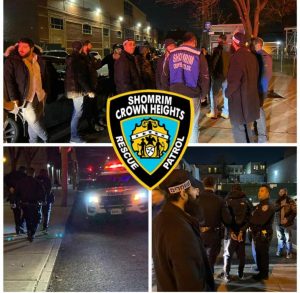 The incident began around 8:00 p.m. as the bachurim were walking on East New York Avenue. They were approached by the two young men, one of whom made a remark about the electric scooter one of the bachurim was riding.

Nervous at the unwanted attention, the bachurim decided to hide inside the parking area of 613 East New York Avenue.

The perpetrators followed the bachurim into the parking area and demanded that the bachurim put their hands up.

When the bachurim complied, the two robbers went through their pockets, taking a wallet with an ID and cards inside. The two robbers then fled the scene, running down toward the projects on Maple Street and Troy Avenue.

The two bachurim exited the parking area and told a passerby what happened. The passerby immediately called Shomrim and began chasing the robbers on foot.

Shomrim caught up with one of the robbers across the street from the Razag Ballroom on East New York and Troy, where they stopped him until the police arrived. The police placed the perpetrator under arrest.

After a brief search, the wallet and ID were found nearby, and returned to their owner.