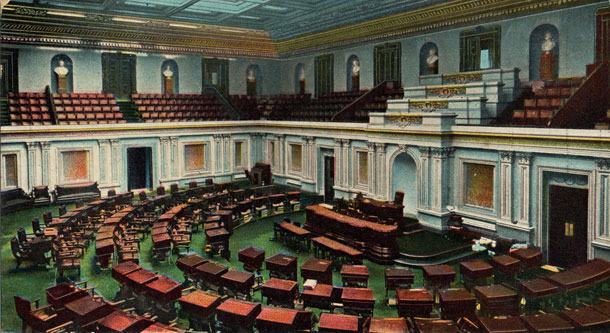 While Colllins said Trump’s actions were “improper and demonstrated very poor judgment,” she concluded they did not meet the threshold for removal from office.

“I do not believe that the House has met its burden of showing that the president’s conduct, however flawed, warrants the extreme step of immediate removal from office, nor does the record support the assertion by the House managers that the president must not remain in office one moment longer,” Collins said.

She added that voters should have the final say. “We should entrust to the people the most fundamental decision of a democracy, mainly who should lead their country,” Collins said.

Her announcement likely leaves Sen. Mitt Romney of Utah as the only remaining GOP senator who has publicly struggled over whether to convict Trump and not yet announced how they will vote. His staff did not return an email Tuesday.

On Monday, Sen. Lisa Murkowski, R-Alaska, also seen as someone who might break with the party, said she would vote for acquittal, largely because she believed the House impeachment inquiry and Senate trial were both handled unfairly due to partisan politics. At the same time, she said she believes Trump’s actions were “shameful and wrong” and that he degraded his office.

With Trump’s acquittal largely assured, the final days of the impeachment trial have focused on whether any vulnerable or moderate senators might cross party lines when it is time to make the final vote Wednesday.

For Democrats, even winning a single Republican vote for conviction would be celebrated as a victory. Likewise, the White House is eager to win over a Democrat.

Senators began making their stances known this week in a series of 10-minute speeches that will continue through most the day Wednesday up to the scheduled 4 p.m. Eastern vote. The speeches, aimed at the tv cameras in a largely empty chamber, replace the four days of closed-door deliberations that occurred during the impeachment trial of President Bill Clinton.

It takes 67 senators to convict and remove Trump from office, an essentially insurmountable number at this point. Republicans hold a 53-47 majority.

With Collins’ announcement, most attention is now focused on the few Democrats who have not publicly announced how they intend to vote Wednesday.

Sen. Doug Jones of Alabama is expected to make an announcement Wednesday before the vote. Sen. Kyrsten Sinema, D-Ariz., said before the trial that she would not comment on the proceedings or the facts until after it concludes, and has provided no indication that she will announce her plans before casting a vote.

Sen. Joe Manchin, D-W.Va., who stressed Monday evening that he still has not made up his mind, proposed censure as an alternative remedy to impeachment, but was largely shot down by Republicans who said it’s too late to pursue that route.

Sen. Dianne Feinstein, D-Calif., who suggested last week that she was still weighing her vote, said Tuesday that the Senate must convict Trump.

“I’m convinced this is a rare instance where this Senate has no choice but to vote to convict and remove this president. I reach this conclusion reluctantly, and with deep concern, but with the belief that this action is necessary, and cannot and should not be ignored,” she said.

“Each Democrat is going to make up his or her own mind. This is an issue of conscience to everybody,” Schumer said.

Knowing all along that convincing the Senate to impeach Trump would be nearly impossible, lead House Manager Rep. Adam B. Schiff’s closing statement seemed tailored to convincing a single Republican to join Democrats in voting to convict.

“Even a single vote by a single member can change the course of history,” he said in his closing remarks. “It is said that a single man or woman of courage makes a majority. Is there one among you who will say, ‘Enough’?”

Collins and Romney joined Democrats on Friday in voting to call witnesses, an effort that ultimately failed.

One by one Republican senators said on the floor Tuesday they would acquit Trump, and criticized the process that brought them to this vote, saying House Democrats were driven by politics, or that they hadn’t proven that Trump’s behavior was grievous enough to warrant removal.

For weeks a majority of Republican senators have dodged answering whether the president’s actions with Ukraine were a proper use of his office, or “perfect” as Trump has said. Just a few, including Sen. Lamar Alexander of Tennessee, have conceded it was improper.

Sen. Rand Paul, R-Ky., used his time to read on the Senate floor a question Chief Justice John G. Roberts Jr. had refused to read during the trial because it revealed the name of a person some claim was the whistleblower whose complaint launched the House’s impeachment inquiry. Paul denies that the question, which is about a conversation between two federal employees, is aimed at naming the whistleblower, noting that it does not use that word.