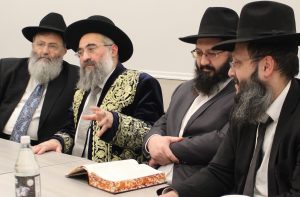 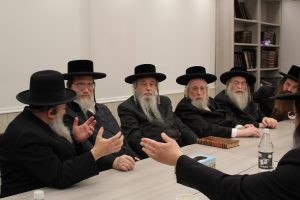 A meeting between the Bucharian Chief Rabbi of New York with members of the Hisachdus Harabbonim took place at the Hisachdus office to discuss various halachic questions concerning kashrus pertaining to those who follow the Sefardic tradition.

Since the Beis Yosef, whose psak is followed by the Sefardim, is stringent in several areas, specifically in the halachos of bishul akum, chadash and “glatt”, amongst others, the Rabbonim discussed which food items that are certified by Hisachdus Harabbonim are acceptable for the Bacharian community.

The recent upsurge of Bucharian children transferring from public school to religious mosdos was discussed, and how these encouraging circumstances bring about improvements in the observance of the families of these children. 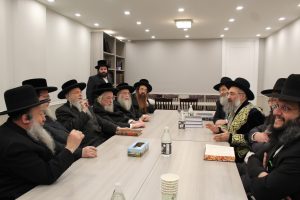 The Bucharian Rabbonim gave over firsthand reports of how the Jews went to great lengths to preserve their heritage in their homeland with tremendous mesiras nefesh, despite being under Communist rule in Russia for many decades.

As the Rabbonim debated various points concerning matrimonial halachos, both groups were amazed at the knowledge the other side had in the sifrei halachah of the other Rabbonim; the Sefardic Rabbonim showed their prowess in Ashkenazic poskim, and the Ashkenazic Rabbonim were fluent in the seforim of the Sefardic poskim. At one point, the Rabbonim of the Hisachdus mentioned a teshuvah of the Maharam Schick, and the Bucharian Chief Rabbi quoted it verbatim, followed by his own questions and thoughts on the subject.

As the meeting drew to a close, one of the Sefardic Rabbonim mentioned that he did not grow up in an observant home, but he switched to a religious yeshiva, which in turn had a positive effect on his entire family. This fact took the Rabbonim of the Hisachdus by surprise, and they expressed their amazement how he was able to develop into such a tremendous talmid chacham, who displayed his brilliance in Torah throughout the entire meeting. 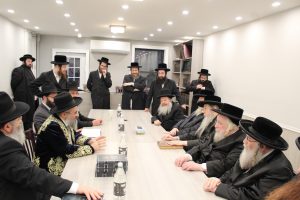 The Bucharian Rabbonim made a special appeal to save the Bucharian kehillah in Queens, a mere fifteen minute drive from Williamsburg, where unfortunately many children still attend public school and are at risk of being lost to Yiddishkeit. Recently, more than 1000 children transferred to yeshivos through the work of Vaad Lehatzalas Doros Bucharia, an organization established at the urging of the Kaliver Rebbe, shlita. Nevertheless, thousands more await this soul-saving transfer, and plans were made for another gathering to help solidify the support for these efforts.