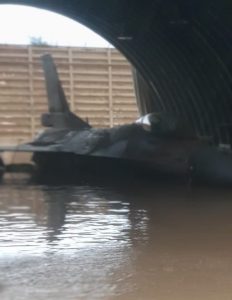 The Air Force has disciplined officers it holds responsible for damage to F-16 fighter jets that were not properly protected against recent storms and flooding.

The commander of the Hatzor Airbase, where the incident occurred, will be transferred to a different assignment and three other officers were formally censured for negligence.

Repairs to the eight planes and other equipment, which had been left unprotected in a hangar at the base, cost the IAF 30 million shekels. The fighters were temporarily grounded, and two of them will not be back in operation for several more weeks, according to The Times of Israel.

Chief of staff of the IAF, Brig. Gen. Nir Barkan, who ordered the disciplinary action based on an interim investigative report, said the officers failed to take the steps necessary to prevent the flooding of the hangar, even though there were already storm warnings.

“The proper and professional operation of the base’s drainage system, which was recently upgraded, would have minimized the damage significantly,” Barkan told reporters on Tuesday.

The base commander reportedly asked to be relieved of his post, and will be assigned as a military attaché in an Israeli embassy abroad.