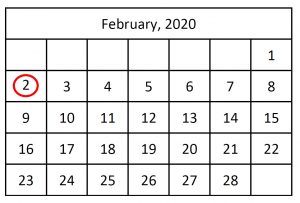 How’s this for a calendrical trifecta: Sunday is Groundhog Day. And it’s a rare eight-digit palindrome when written as 02/02/2020 – the only one of its kind this century.

A palindrome, as you might know, is a sequence that reads the same forward as it does backward. Aziz Inan, a professor of electrical engineering at the University of Portland, collects dates that are palindromes, the way other people might collect coins or chase solar eclipses.

“In this century, in the American date system – which is month, day, year – there are 12 eight-digit palindrome dates,” Inan said. But “in this century, there is only one such palindrome date which is expressed with eight digits, where you have the complete year number on the right” and the month and day can be swapped. (Put another way: Written as MM/DD/YEAR or DD/MM/YEAR, it’s still a palindrome. Contrast that with 11/02/2011, which, in many foreign notations was written as 02/11/2011.)

That makes Sunday’s palindrome unusually cross-cultural. It’s written as a palindrome “whether you’re in Europe, Asia, America – it happens on the same calendar day, which is February the 2nd,” Inan said. Sunday is also the 33rd day of the year, which is followed by 333 more days, he said.

“When I share these with my students, with other people and whatnot, most of the time I get a spark in other people’s eyes, you know?” Inan said. A palindrome has “this magic power,” Inan said. “And also – it is brainteaser.”

In case you doubt him, the professor offers a little bit of homework: Try to write down all the palindromes for the 21st century in the American calendar. There are 12 eight-digit palindromes and 26 seven-digit palindromes (in which you drop the zero before a single-digit month). If you get stumped, Inan has the answers on his website. (https://faculty.up.edu/ainan/palindromedates21stcentury2011.pdf)